KidsFest is full of winter holiday fun for kids in Christchurch and Canterbury. It runs from 8 to 22 July. KidsFest is always popular and many events book out quickly, so have a look and figure out what things you want to do! Tickets are on sale 9am this Thursday 1 June.

There are plenty of events and activities on at your libraries, including Lego animation courses (these run over 2 days and are aimed at ages 8 to 12 years, $22). There are also free activities, including:

The Very Hungry Caterpillar at the Gardens Storytime for ages 3 to 7 years
Explore and discover scenes from The Very Hungry Caterpillar nestled in the Christchurch Botanic Gardens. Follow the team from the Christchurch City Libraries around the beautiful gardens, as they bring these scenes to life through the art of storytelling.
Free, bookings required. Phone 03 941 5140.

Here are a few KidsFest favourites:

More FM Lantern Parade on Saturday 8 July is the launch event for KidsFest, and this year it starts in Cathedral Square and winds its way to Margaret Mahy Playground where there will be fireworks.

Explorer night at the Museum (we went last year and it was busy and fun romping around the Museum on a cold winter night). Free and no bookings required, it’s on four nights from 6pm to 8pm: Tuesday 11, Thurs 13, Tues 18 and Thurs 20 July.

The Christchurch Brick Show ($5) Saturday and Sunday 15 and 16 July. Fun for all the family to be honest – amazing LEGO displays to admire, hands-on play areas, and more.

Here’s another things for kids – whether on holiday or during term. Our eResources enhance kids’ learning, fun and play.They are free, and all you need is your library card number and password / PIN. 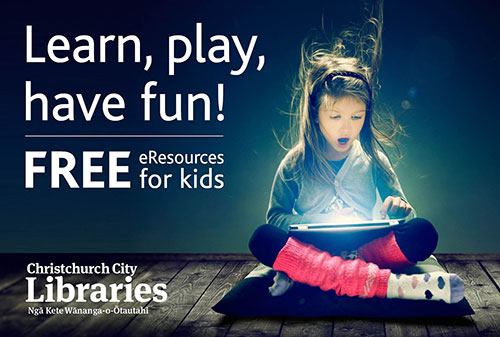 Unlimited copies of the Magpie Hall eBook will be available to borrow for the whole of August from our Wheelers eBook platform! Thanks Wheelers and publishers Penguin Random House.
Reserve now.

Take a walk with us on the dark side, as we explore family secrets, taxidermy, Victorian tattooing, and Gothic novels.

I absolutely loved this book. It had a wonderfully familiar setting in the Canterbury foothills somewhere, mixing family history mysteries with the pressures of modern life. I was spellbound. 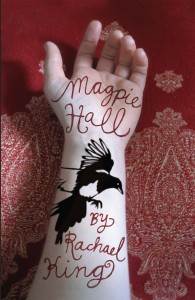 Join the Court Jesters as they improvise themes from Magpie Hall
Friday 7 August at South Library
7.30pm to 9pm

A new resource for parents, teachers and the children of Canterbury to help children cope with anxiety was launched recently. Maia and the Worry Bug (for families) and Wishes and Worries (for classroom use) are two picture books that make up an anxiety management resource.

Maia and the Worry Bug is about the worry bug that moves in with Maia and her family. It makes them worry about all sorts of things. Mum worries about whether the family are safe, Dad worries about whether Mum has fixed the bookcase to the wall properly and if the emergency kit has everything it needs, and Maia doesn’t want to leave the house. Their worries get so bad that they finally have to come up with a way to get rid of the worry bug for good. As well as the story there are also exercises and discussion questions in the back of the book for families to work through together.

The Worry Bug project is the brainchild of two Christchurch women; psychologist Julie Burgess-Manning and teacher Sarina Dickson, with illustrations by the wonderful Jenny Cooper. The books were made possible by receiving funding from the Canterbury Community Trust and Canterbury Earthquake Appeals Trust.

The resource will be given out free to all new entrant – Year 4 children and classrooms in Christchurch city and the Selwyn and Waimakariri districts in Term 3.

As well as Maia and the Worry Bug we have some other great resources in the library to help children cope with anxiety:

13 April 1896
City hosts the first meeting of the National Council of Women.

19 April 1988
Proposal for 152 metre tower in Victoria Square abandoned after much public debate.

On 12 April 1850 John Robert Godley, first leader of the Canterbury Association settlers, arrived with his wife in Lyttelton on the Lady Nugent. He quarreled with Captain Thomas, and departed for Wellington, but returned 28 November.

Godley married Charlotte Griffith Wynne in September 1846. The family arrived in Port Cooper (Lyttelton) in April 1850. He was met by Captain Thomas and shown the plans for three towns, and housing for the new settlers at Lyttelton.

The fleet of the first four ships reached Lyttelton in December 1850 and was met by Godley. He was the leader of the settlement for the next two years, and in this time changed the Canterbury Association’s conditions for the pastoral leases (land in the surrounding countryside leased for farming), so that the new settlement was able to make a good start to establishing a strong farming base.

Godley believed that the purpose of the Association was to found Canterbury, not govern it, and that the people making a life in the new settlement should decide how it was run, not people in England.

Godley returned to England in December 1852, where he wrote for some of the newspapers on the subject of colonial reform. He later worked for the War Office and continued to argue for self-government for the British colonies.

Godley died on 17 November 1861 in London. In 1867 the citizens of Christchurch erected a statue of him in Cathedral Square inscribed:

The statue, the first public commemorative statue in New Zealand unveiled to a single person, was sculpted by the English Pre-Raphaelite sculptor Thomas Woolner. The statue fell from its plinth during the 22 February 2011 earthquake. It was on display in the Quake City exhibition in the Re:START Mall and is now back in Cathedral Square.

30 March 1883
Two young boys die of exposure on the Port Hills. Monuments can still be seen near the Rapaki Track.

1 April 1932
New Regent Street opens, built on the site of the old Colosseum.

1 April 1949
Sign of the Takahe opens. This was the completion of the Summit Road developments begun by Harry Ell in 1908.

5 April 1844
Frederick Tuckett and a party including surveyors, land at Lyttelton from the “Deborah” looking for a suitable site for a Scottish settlement in the South Island. They subsequently got lost in the swamps, so it is not surprising that their eventual choice was Otago, not Canterbury.

February 25, 1908
Theatre Royal opens. This is the building which exists today, the third to bear the name.

The first house on the Canterbury Plains, Riccarton [ca. 1890]

It was 100 years ago that soldiers from Germany, France, and Britain and her colonies went to war in a part of France and Belgium that was once known as Flanders.

It wasn’t long before the war had spread to Russia, Turkey, the Middle East and Africa. Thousands of men went to war and, although most came home, many did not.

Many of you will have an ancestor that took part in this great and terrible war. If you want to know what happened to them, we can help you. We just need a name.