A recent addition to the children’s fiction shelves, Pax by Sara Pennypacker is a deeply emotional story that explores the special connection between a boy and his fox. The narratives of the two main characters, Peter and his fox Pax, are beautifully entwined in the tale of an epic journey through a world threatened by war. 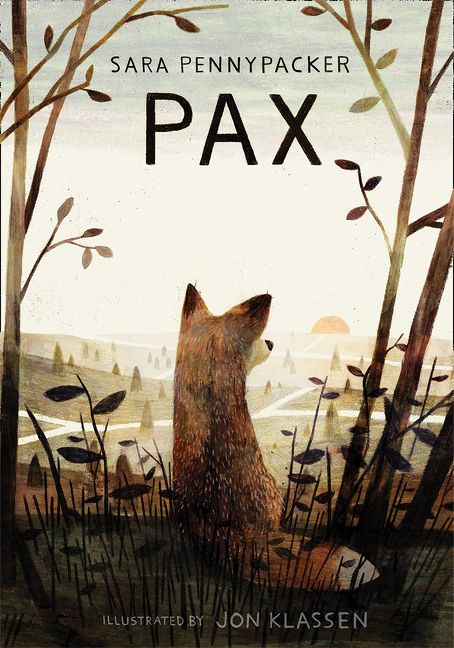 Peter and Pax have both faced difficult family challenges early in their lives. When Peter finds and rescues Pax, an important relationship begins to develop that proves mutually supportive and healing. When Peter and Pax are separated by forces beyond their control (the decisions of their human elders and the destructive forces of war) the strength of their bond calls each of them back to one another. Their journey to be reunited turns into a voyage of self discovery. Along the way, both characters encounter two- and four-legged companions that hesitantly, yet expertly, guide them. But will they ever manage to find each other and will their respective experiences have changed the bond between them?

This is a story that presents a realistic view of life from the perspective of both children and animals. As hinted at in the naming of the fox Pax, it explores the journey taken to find an inner peace. The novel addresses mature topics such as war, grief and anger. These are treated sensitively, and balanced with discussion of ideas such as acceptance, the peace and freedom that comes from knowing oneself, what it really means to be home – and the importance of letting go.

Perhaps more suitable for readers 8 years and older, it may still suit those in the younger age bracket if time is allowed for discussion around some of the heavier themes involved. It is also a fantastic read for teenagers and adults! I particularly enjoyed the way in which Pennypacker’s extensive research of red fox behaviour lent credibility to the story of Pax. The portrayal of Pax’s thoughts and feelings is realistic and offers the kind of insight not often seen in more idealised animal characters of children’s fiction.

With both dystopian and fairytale undertones, the world of Peter and Pax is brought to life in the book with the aid of the moody illustrations of Jon Klassen. The author Sara Pennypacker also wrote the acclaimed Clementine series as well as many other popular children’s stories.