Far back on the Left Bank, there is a secret quarter.

A warren of quiet streets sandwiched between boulevards where little traffic moves. On a corner stands a building with a turquoise door – Number 37 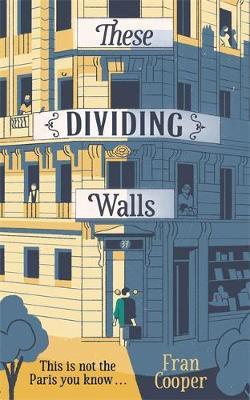 Set over a hot summer in a shabby corner of Paris we are introduced to the residents of Number 37. Heat is central to the novel and it is what binds the stories together –  from a city tense with heat and boiling tensions over nationality and immigration, to feverish dreams, and the languid and stifling air of the apartment block.

A debut novel from Fran Cooper this book is character driven, and if you don’t like or at least empathise with them then maybe this won’t be the book for you. Some I liked better than others and for some the more I knew about them the less they interested me. But others have stuck in my memory.

This novel is really a series of vignettes about the neighbours loosely coupled by the building they share and the city they live in. Sometimes their lives overlap and sometimes they are oblivious to the lives of others around them.

Through Edward we are introduced to the building. Edward has come to Paris to escape his own grief and an offer of an attic room by his friend Emilie brings him to Number 37 and the world of Frederique and her bookshop, Anaïs and Paul, Chantal and Cesar, Madame Marin and her beige husband, Isabell Duval, Monsieur Lalande, Amina and Ahmed, and the homeless man, Josef, who watches all the comings and goings at Number 37.

These Dividing Walls depicts a microcosm of society and features a cast of troubled characters – those living with grief, or looking for escape from it, night-time keyboard warriors, misguided ‘everymen’, and those lost in their own lives. “This is not the Paris you know” but maybe you may recognise these same characters living in your own community.

2 thoughts on “These Dividing Walls”