Based on a story by JK Rowling, Jack Thorne, and John Tiffany, Harry Potter and the Cursed Child is the transcript of the celebrated London play. The story takes place 19 years after the battle of Hogwarts or, (in muggle terms), ten years after publication of ‘Harry Potter and the Deathly Hallows’, the last instalment in this beloved series. 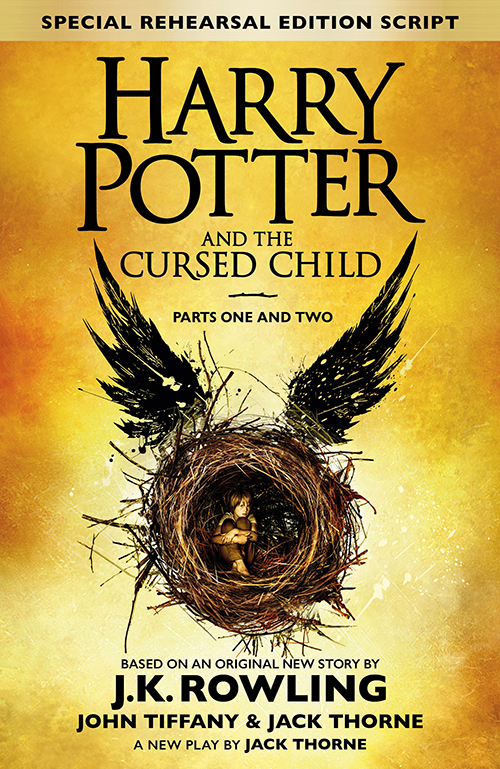 Harry, now married to Ginny, is the father of three children, and works for the Ministry of Magic (couldn’t they have given Harry a slightly cushier job? I mean we muggles would at least have given him a knighthood …).

Ron has taken over Weasleys’ Wizard Wheezes’ (he kind of helped to save the world too by the way people, just saying, headmaster of Hogwarts maybe?…). Hermione and Ron are happily married with a daughter, and that is all we care about, right? Wrong. The main focus of this story is on Harry’s difficult relationship with his son Albus. Living in the shadow of his father, Albus Potter is a bitter, alienated teen, with something to prove, and slowly, as the story goes on, well, he doesn’t really prove it. He does however cultivate a great friendship with Draco Malfoy’s wonderfully drawn son, Scorpius. Fun, endearing, and emotionally intelligent, Scorpius saves this play from just being a bit of a cheesy reunion with the Harry Potter cast. There is some good banter between the two such as:

Albus: We’re ready to put our lives at risk.
Scorpius: Are we?

How Draco produced a real brick, and Harry produced a bit of a plank, is something we will gloss over, as we will the fact that Harry, perhaps the greatest wizard of all time, still wears glasses and hasn’t managed to conjure up some twenty/twenty vision for himself after all these years.

The story centres around the death of Cedric Diggory at the Triwizard tournament, back in Harry’s fourth year at Hogwarts. Albus and Scorpius, determined to correct the past, end up rewriting the past with dangerous consequences. There are some traditional, and ever welcome, Rowling plot devices along away- such as poly juice potions, time turners, and appearances at Hogwarts. Like the main Harry Potter novels, Harry Potter and the Cursed Child is very character driven and fans will be thrilled by appearances from old characters like Snape, Dumbledore, and even Harry’s parents.

While this did have a bit of a fan fiction feel about it for me, I loved getting the chance to hang out with the Harry Potter crew again. I grew up with Harry, Ron and Hermione, so, like any respectable Harry Potter fan, reading this was not an opportunity to be passed up on. While the plot wasn’t a typically clever, intricate Rowling plot, it certainly kept me engaged until the very end, and I enjoyed a lot of the fun dialogue:

GINNY: I’m scared too.
RON: Nothing scares me. Apart from. Mum.

Harry-ites will have to bear in mind that ‘Harry Potter and the Cursed Child’ is in play format, and was not written by Rowling herself, if they want to have a good time reading this. Harry Potter and the Cursed Child was always going to be a bit of cursed sequel as most fans have been gagging for a follow up for the past ten years. The pressure to be as good as the rest of a bestselling series is always huge, not made easier in this situation by the fact that Rowling herself is not the writer. If you are keen to make some allowances and not expect a ‘sequel’, I guarantee you’ll just have a fun time reuniting with the world of Harry Potter again. After all, as Albus Dumbledore said, ‘perfection is beyond the reach of humankind’. Except, I will add, if it has been written by JK Rowling.

Harry Potter and the Cursed Child parts 1 and 2.
Published by HarperCollins New Zealand

What’s in a name? A whole story, actually! Every library in the Christchurch City Libraries network is named in both English and Māori, and with two new libraries (or rather, libraries returning in sparkly new form) popping up recently, we’d like to share a bit about their Māori names.

Our libraries’ Māori names tell some great stories about their areas. For instance Matuku Takotako: Sumner Centre has been given the original Ngāi Tahu name for Sumner Beach. Literally referencing the upright posture of bitterns, it also reflects the community and local iwi identity and recalls a Polynesian tradition associated with Tawhaki, who is said to have ascended to the heavens in the pursuit of knowledge – very appropriate for a library!

Ōrauwhata: Bishopdale Library and Community Centre means “the place of the multitude of eels” and recalls the area before it was planted and developed by the Bishop family in the 19th century. At this time whata (eels) swam in overflow water basins formed during flooding from the Waimairi River.

Curious about your local library’s Māori name? You can find our all about it on our Māori Library Names page (and listen to sound files of the pronunciations too). While you’re exploring, why not check out our Te Wiki o te Reo Māori page too? Or view the video below showing some Māori place names in and around Ōtautahi.

These men are shown carrying out their duties at a camp in Addington where recruits were trained before leaving for the South African (Boer) War (1899-1902). They are riding on a wagon owned by J.M. Heywood & Co. who were general cartage contractors of Christchurch and Lyttelton.

Do you have any photographs of Canterbury’s involvement in the South African War? If so, feel free to contribute to our collection.