It is difficult not to reveal one’s age when discussing anything you may have read or watched in your childhood but I loved watching the Famous Five on TV.

I was an Enid Blyton reader during my childhood but my oeuvre during my younger years had been more along the lines of the Magic Faraway Tree and the dubiously titled “Mr Pink Whistle Interferes.” So whenever I picture the Famous Five they will always be the TV versions.

As I got older mystery and adventure books drew me in and I started reading the Five’s adventures plus I also discovered Trixie Belden and Nancy Drew…who doesn’t love a story with secret passageways, torches, penknives, trapdoors, panelling that moved to reveal hiding places, treasure maps, spooky castles and adults whose dastardly plans were foiled by children (and a dog) – clearly I was an Agatha Christie reader in development.

The Famous Five were brothers Julian and Dick, their sister Anne, cousin George (Georgina) and Timmy her dog. They seemed to never age – which was sort of true as Blyton hadn’t planned on writing so many (she planned 6 but wrote 21) – and so Five seem to go into a time vortex and remain perpetually pre-teens! Either that or they never went to school and are on never-ending school holidays!

I imagine everyone had a favourite in the group. Julian was the self-assured older brother, while Dick was the more laid-back and famished second child, and the youngest sibling was Anne (who always seemed to be turning her ankle). But it was cousin George that I think most readers probably wanted to be – mainly because Timmy was her dog!

This year in September the Famous Five are turning 75 – hoorah! – as ‘Five on a Treasure Island’ was first published in 1942.

As a grown-up you realise that all was not well in Blyton land – she had a troubled personal life – and her books can seem anachronistic and politically incorrect in 21st century terms. But her books still endure today and are still heavily read by children (and adults). She was extraordinarily prolific and wrote hundreds of books for children of all ages – including Noddy, The Secret Seven, Mallory Towers and St Clare’s school stories, and the aforementioned Magic Faraway Tree books.

But it is the Five that are perennial favourites with lots of readers.

I suspect it has a lot to do with children getting the upper hand on adults, and the endless eating – ice cream, scones, sticky buns and cakes, hard bolied eggs, apple pies, etc. 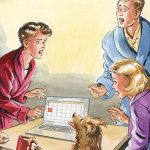 *Note: With lashings of ginger beer never appeared in an EB book but rather was coined by the writers of the Comic Strip Presents in their parody Five Go Mad in Dorset.

Do you have any photographs of the former New Brighton Zoo? If so, feel free to contribute to our collection.