I’ve had this song in my head since I saw Peter Garrett recently. Not at the Midnight Oil concert, but at the WORD Christchurch Shifting Points of view session at The Piano. It was the last talk in a series of goodies that formed WORD’s suite of Christchurch Arts Festival offerings.

Peter Garrett – musician, former Aussie federal politician, activist – appeared in conversation with the able and amiable broadcaster/journalist Finlay Macdonald, and followed the session with an audience Q & A and a book signing.

Peter’s book is a memoir of his life and career called Big Blue Sky. He found writing it both challenging and gut-wrenching:

It’s not just about what you remember, it’s how honest can you be.

He talked about the reformation of Midnight Oil and the series of concerts they are undertaking, including such stunner venues as Alice Springs and a rainforest in Cairns. Peter reckons they are sounding even better than their heyday.

His broad and expansive knowledge of Australian history as well as other topics made him a thoroughly engaging speaker. He talked politics, music, and more – and his move into federal politics made a lot of sense because he strongly believes:

The system cannot work unless it is infected by people who want it to work.

Peter went with the Labour Party instead of Green because he was “allergic to moral superiority and preachiness”. 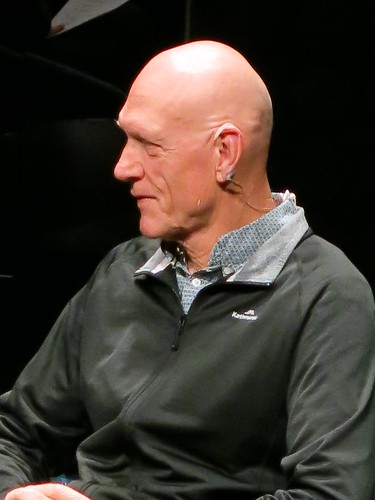 There was plenty of music talk for the aficionados. He shared musical influences and passions – The Beatles, Neil Young, Rage against the Machine, Aborigine bands. Recalling seeing Muddy Waters play at ANU university, Peter got shivers right there on stage. So did we.

Peter Garrett & @MacFinlay in front of an audience of Midnight Oil fans and other interested parties. 🙂 pic.twitter.com/cGC1tJgyvT