World Knit In Public Day was last Saturday (13 June), and to celebrate, Sally Blake (Riccarton High School Library Manager), Catherine Boyd and Heather Chambers (Upper Riccarton Library) joined 23 other crafters on the Orbiter Bus. Sally yarn-bombed a bike from the Eco Shed, which was put on the rack at the front of the bus, to advertise the event. 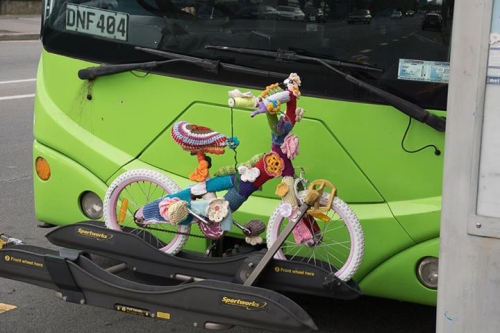 We knitted, crocheted and had a hilarious time together. We comprised a core group from the Upper Riccarton Knit ‘n’ Stitch Group, complemented by friends, neighbours and new friends that found out about the event through Facebook. People stayed on the bus for one or two complete rounds, and it was such a resounding success, that it will be repeated next year. 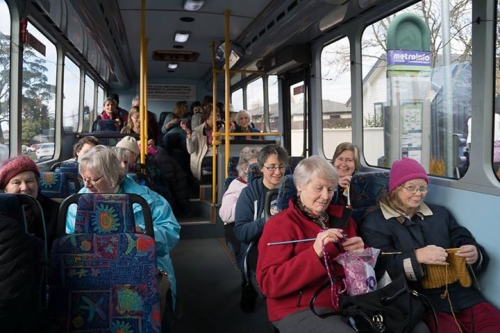 Be part of a photographic documentary record of Halswell.

Willing volunteers needed to be photographed for an exhibition and inclusion in our digital heritage collection.

This year, Christchurch City Libraries have teamed up with the University of Canterbury, School of Fine Arts to create a photographic documentary record of the wider Halswell area. This work will be exhibited as a digital exhibition at the opening of Te Hāpua: Halswell Centre, in late 2015, and will feature on the Christchurch City Libraries website through the digital heritage collection.

If you’d like to be photographed for this project please leave your name and contact details with the staff at Halswell Library.

Today is Bloomsday – 16 June. Back in 1904, James Joyce stepped out for the first time with Nora Barnacle, the woman who would become his wife. And in Ulysses, it is the day that Leopold Bloom kicks around Dublin.

The Guardian has a great article: Bloomsday: how fans around the world will be celebrating James Joyce’s Ulysses. Some people go as far in their celebrations as to indulge in the gastronomic horror  their hero Leopold Bloom partook of:

thick giblet soup, nutty gizzards, a stuffed roast heart, liverslices fried with crustcrumbs, fried hencods’ roes. Most of all he liked grilled mutton kidneys which gave to his palate a fine tang of faintly scented urine

I am determined to read Ulysses this year. Part of my desire to is connected to Kate Bush. I love her song The Sensual World.  It is all about Molly Bloom, and is one of the sexiest songs I know. Kate originally didn’t get the rights to use Joyce’s words as she intended, but later the Joyce Estate relented and she re-recorded the song as Flower of the Mountain. You can listen to it on her Director’s Cut album.

I was a Flower of the mountain yes when I put the rose in my hair like the Andalusian girls used or shall I wear a red yes and how he kissed me under the Moorish Wall and I thought well as well him as another and then I asked him with my eyes to ask again yes and then he asked me would I yes to say yes my mountain flower and first I put my arms around him yes and drew him down to me so he could feel my breasts all perfume yes and his heart was going like mad and yes I said yes I will Yes.

So I am going to do a personal Bloomsday today, and walk to the library and pick up a copy of Ulysses. Yes.

James Joyce is an author I regard with equal amounts of admiration and guilt. Admiration? His statue in Dublin and the jaunty angle of his cigarette holder in photographs. And I love a man (or a woman) with an eye-patch. Guilt? Ulysses languishing on my list of books I know I should have read but haven’t.

I am just a bit too young to have dressed up as a woman to go to the segregated screening of Ulysses. Have read some but never finished Ulysses. But for an insight into Joyce I like Roaratorio.

Ulysses has been surrounded by controversy over the years – it was banned in America from 1921 until 1933. The 1967 film directed by Joseph Strick was controversial in part because of the use of the “f word” and in New Zealand was shown only to gender segregated audiences! (It’s all true folks – I was there as bright eyed varsity student). I seem to have survived unscathed and managed to read my way through both Ulysses and the slighter (in size), but no less linguistically challenging, Portrait of the Artist as a Young Man. Ulysses weighs in at over 600 pages. 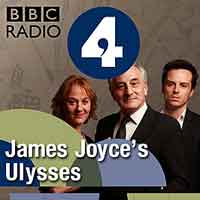