For more images of people at work, see our page Christchurch at work.

Ka mātua i tēnā!
That’ll do. 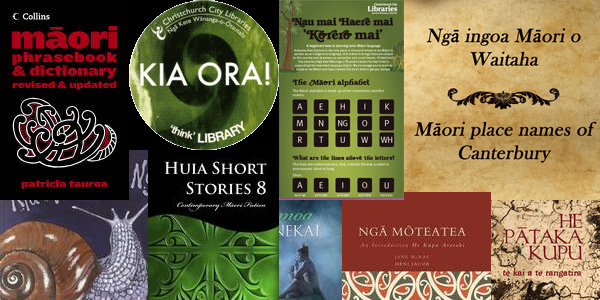 FESTA – The Festival of Transitional Architecture – takes place over Labour Weekend. Remember LuxCity in 2012, and Canterbury Tales in 2013? If you went, you’ll be dead set keen to experience FESTA again. 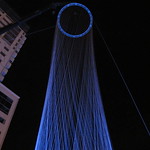 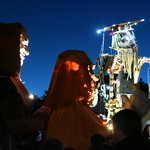 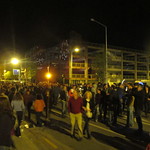 This year’s big event is CityUps:

Over 250 students from CPIT, Unitec and The University of Auckland transform two blocks of Christchurch’s central city with towering, physical installations to create their vision of a future Christchurch. Beneath these outrageous designs are buzzing urban spaces where pop-up cafes, performance spaces, an all-ages-youth venue, a night market, dance hall, community bike workshop and bike light disco, bars, street games and much more operate.

There is a plethora of other events on too – including this library one:

Come along to Julia Morison’s wonderful Tree Houses for Swamp Dwellers, on the corner of Colombo St and Gloucester St.  Get a book out from the mobile library or from the nearby Central Library Peterborough – or bring your own. Read amongst the trees of this sculptural installation. Bring your lunch and enjoy a quiet inner-city experience. Read in, chill out.

Here’s me giving the Tree Houses a test read (I’m reading Once in A Lifetime: City-building After Disaster in Christchurch). 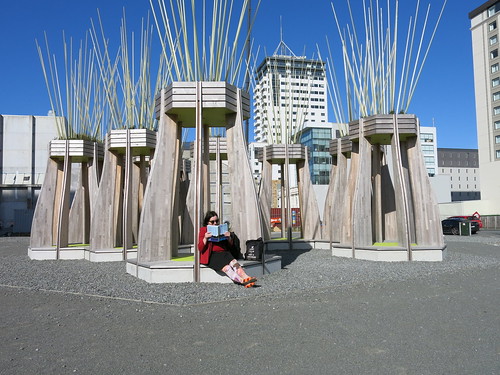 See the full programme on the FESTA site.

Like Loading...
20 October 1948
“Pleasure Garden” art controversy begins when a Frances Hodgkins painting (done in about 1933) is exhibited at “the Group” show. This fierce debate on art style was joined by people throughout New Zealand. It raged for 3 years until the City Council accepted the painting as a gift on September 3, 1951.

22 October 1863
First Agricultural and Pastoral Association show in showgrounds (which is now Sydenham Park). An “unofficial” show had been held in October, 1862.

22 October 1985
“Elizabeth” the one tonne sea elephant dies of a viral infection on Sumner Beach. She had lived for 5 years on the City’s beaches, estuary and rivers and was often found crawling up suburban streets. She has recently been immortalised in Elizabeth, Queen of the Seas by Lynne Cox.

24 October 1870
Disastrous fire (New Zealand’s most extensive to that date) destroys the centre of Lyttelton.

More October events in the Chronology.