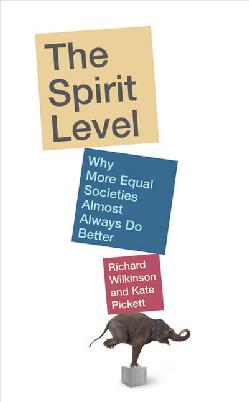 The gap between the rich and the poor has become one of the most topical issues in many countries post GFC (Global Financial Crisis) and post Neo-Liberal economic reforms. More and more people seem to feel that the rich (particularly the super-rich) don’t pay enough tax and have managed to sneakily get away with taking no responsibility for the GFC while the rest of us languish in our lacklustre lifestyles working squillions of hours per week…and all the while paying our fair share to keep society running! Or so the Russell Brand sentiment goes.

So its against this backdrop that The Spirit Level should be read, I guess…

The Spirit Level: Why Equality is Better for Everyone is among a handful of cornerstone works for anyone who is interested in 21st century political and economic thought. I reckon. In fact, I’d almost argue that it is a grand thesis which seeks to give policy advice on how to solve (or markedly reduce) a catalogue of society’s ills through its recommendations and findings.

The key message that authors (and epidemiologists) Richard Wilkinson and Kate Pickett want to drive home is that the more “unequal” a society is, the more likely that society is to manifest higher degrees of illness, mental illness, drug abuse, widespread poor educational outcomes, obesity, social mobility and cohesion, violence, teen pregnancy, among other societal ills such as rapacious consumerism.

The focus on “inequality” is really on Income Inequality – the income gap between those at the top, middle and bottom. The argument being that countries with larger income gaps experience more societal ills.

Their claims with regard to what drives poor outcomes in terms of societal well-being are backed up by some quite robust research comparing and contrasting various developed countries (and comparing States to States in the USA). Lots of graphs, statistical data etc drawn from reputable organisations such as the United Nations and the World Bank (among many others).

However, not all variables are taken into account which might frustrate some people – claiming rates of obesity are higher in the USA compared to Japan because of the USA’s rough private healthcare system is a bit unfair when you leave out factors such as Japan’s healthy and entrenched culinary traditions, and genetic factors (skinny genes).

But, it also seems that countries which have higher income taxes and high levels of wealth redistribution (i.e gather large amounts of tax revenue to pay for generous education, welfare, healthcare and maternity leave programmes) are more “equal” than countries which have low taxes and far less social spending – we see less of the aforementioned health and well-being problems if we practice the former!

However, the authors seem more concerned about Income Inequality (even if the average income is quite good but the top income markedly better), not so much tax. But what is outstanding is that pretty much all of the “most equal” countries have really high income tax regimes (Japan, Sweden, Finland, Denmark, Norway).

So you are kind of left to draw your own conclusion about which is the most important – income equity or high tax rates, or both?

Sadly, New Zealand and Australia rank really highly in terms of inequality according to the authors, and therefore, this is what drives a variety of problems here and in Oz. Not just “people being lazy” etc.

Don’t be put off the by the academic sounding nature of the book, it’s really well written which makes all the technical sounding stuff really palatable.

The library has Max Rashbrooke’s book Inequality : a New Zealand crisis – and what we can do about it on order and it is due to be published in June.

The ARW site has this to say about the author.

Journalist Max Rashbrooke has written for national newspapers and magazines in Britain and New Zealand, including the Guardian, the National Business Review and the New Zealand Listener.  He was the recipient of the 2011 Bruce Jesson award.

It would be fair to say that as a journalist writing about the growing gap between the rich and the poor and as a recipient of the 2011 Bruce Jesson award “given annually for critical, informed, analytical and creative journalism which will contribute to public debate”, that Max Rashbrooke would have a few tough things to say about the current state of affairs in New Zealand, and he certainly did, with Mark Sainsbury asking the questions. Max gave many statistics, for example the bottom 10 percent have had no increase in income in the past 30 years, at the top it has more than doubled.  Someone earning $14.80 per hour, which equals $490 a week after tax and after having paid for all essentials is left with $50 per week or $5 a day.

His belief is that inequality is not just an issue for those struggling with poverty but  that income gaps are corrosive for society as a whole. To back this up  his book contains interviews of people from all income levels and includes  essays from well-known researchers, who along with their analysis also provide solutions.

He made reference to Christchurch and suggested that we are experiencing inequality in the bucketloads, (not quite his words but that was the gist of it) which is either a good thing to hear as someone is acknowledging our issues, or a not so good thing because we really must be in a bad way!

The audience was right behind him, it was a free event and was jam-packed with good solid lefties.  People stood to ask questions that were ostensibly political speeches.  People cheered, it was like an old-time political rally with Mark Sainsbury conducting straw polls in his booming voice… “How many of you would pay higher taxes if it could help with the problem of inequality”? Every hand in the house went up, a biased audience yes, and depending on your political persuasion a result that is either comforting or downright nuts.  All in all a great free event and I am looking forward to the book.

Have a look at Max Rushbrooke’s Blog to read some of his articles.

Unbelievable how quickly the financial year rolls round, isn’t it? No sooner have you packed away the final accounts and neatly filed invoices (I wish) for the previous year, than March is here again and it’s time to wade through a whole new pile of bank statements.

If you’d like to save money on accountant’s fees or tax refund specialist charges by filing your own return there is help available.

Christchurch City Libraries’ tax page is a great place to start. There’s information about filing returns and links to the IRD to find out if you will get tax back.  Teens can keep up-to-date about workplace rights and tax responsibilities.

Gareth Morgan’s recent book, The Big Kahuna, gives an interesting perspective on the purpose of tax and the distribution of wealth in New Zealand. It’s content that affects Kiwi taxpayers – and, let’s face it, that’s pretty much all of us.

March 31 marks the end of the financial year. In these times of paying tax by remote control (i.e through PAYE) it can be easy to overlook the fact that you may be entitled to a refund. It is  a good idea to check that you haven’t overpaid your tax or there is something you can claim back like charitable donations.

Before you rush off to the mall and pay someone to do the exercise for you have a go with help from the IRD website. If I can do it so can you.

If you want do delve deeper into taxation matters we have more useful resources to recommend. In fact a quick browse through the catalogue revealed some fascinating titles – Trump University Tax Asset Protection 101: tax and legal strategies of the rich, Tax avoidance law in New Zealand, We’re Here to Help (the film about Dave Henderson and the IRD) and The Paradise Conspiracy.

See our page on tax for more information on taxation.