New York resident Suki Kim is a very clever essayist and novelist who wrote the award winning work The Interpreter. However, it was her impressions of life in North Korea as an undercover journalist which were the subject of her discussion On North Korea: Inventing the Truth at WORD Christchurch’s Shifting Points of View session at the Christchurch Arts Festival.

The Democratic Republic of North Korea (DPRK) is one of the most misleading titles for anything, ever, as they kind of forgot to add the Oppressive, Centralized, Totalitarian, Cult-like, Single Party parts to the title. Human Rights Watch refers to the DPRK as one of the most “harshly oppressive countries in the world”.

North Korea is described by Suki Kim as basically the world’s biggest cult. At the centre of this cult is the “eternal, supreme leader” Kim Jong-un, who rules with an iron fist.   The myth of the supreme leader goes on despite persecution and the millions that go hungry due to food shortages. There is no contact with the outside world as borders and lines of communication are sealed, and government agents watch everyone who might seek enlightenment.

Author and South Korean American Suki went to North Korea to teach English to the sons of the elite as part of a special international programme at a university titled “The Pyongyang University of Science and Technology” (which was quite unscientific, and devoid of technology). Without You, There Is No Us is her memoir of this experience, which beautifully infuses impressions and emotions into the issues of world politics and international relations. Political material can be achingly dry and hard to relate to; this most definitely isn’t.

Hearing her speak was timely. The entertainment industry is producing lots of young adult dystopian fiction (think The Giver, Hunger Games). Spookily, her depictions of life in the DPRK had me thinking such fictions are somehow based on these North Korean facts. 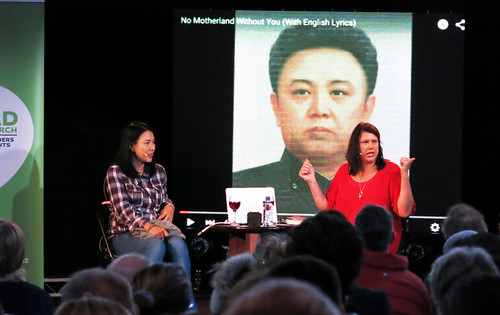 Every aspect of daily life is monitored within the Institute she taught at, and everything – from the articulation to the architecture – is geared towards control. The university is intentionally designed with sterile, glazed spaces – privacy is at a premium. The idea “there is no I in team” is taken to an illogical extreme as Western notions of individualism are staunchly repressed and this was manifested in the language of her students. The words “I” or “Me” are almost never utilized by the students, who robotically state “We” and “Our” in a true spirit of collectivization and group identity. There is no place for individual ambition, it’s all servitude to the State. She did her best to teach them. And what she encountered was classes of bright, eager young men who have been lied to their whole lives, not only about the greatness of their country and its leaders, but about everything. They believe they have the internet, but it’s actually an intranet. To make it even more painful, in a show of nutty nationalism they think their “internet” is the best in the world. 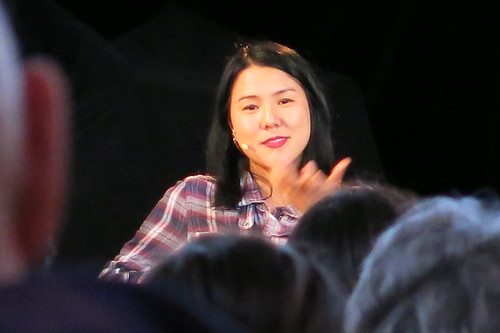 Suki developed a fondness for this innocent bunch of kids, who almost never get to see their parents (but pretend this is normal so not to incur the wrath of their overseers) and are in many ways hopelessly lost – with only the guidance of a regime which lies to them.

Over time, Suki sneakily and quietly attempted to inject the smallest of radical ideas into their naive minds. Like the idea of choice, for example, when shes is asked pointedly by the students “how many TV channels does [“wicked capitalist”] America has”!? She gingerly answers “thousands”, trying not to appear boastful in light of North Korea’s one channel which presents shows full of propaganda about the Great Leader. She endured many Q&A sessions regarding details of our lives in the West, but she could not be completely honest with her inquisitive class, as most subjects were off limits. A knowledge of the truth hurt!

"The real gulag is in the mind." Suki Kim on her North Korean students' lack of general knowledge. #wordchch #chchfest2015 ^DR

I did manage to ask Suki during our own Q and A time if North Korea had any allies these days, and she said they don’t, not after the fall of the Soviet Union – “North Korea are all on their own”, much like the kids in her class whom she grieves for deeply…..

“Without you there is no us” is a beautifully written memoir detailing daily life in a closed society, and which is laced with stories of her own family history detailing the separation of loved-ones who may never meet again as they are spread across the two Koreas.

Suki Kim is coming to Christchurch on Sunday 30 August as part of the WORD Christchurch Shifting Points of View events in the Christchurch Arts Festival. Her topic: On North Korea: Inventing the Truth and she’s in conversation with Paula Morris. She answered our quick questions:

I have never been to New Zealand. All I know about Christchurch is the earthquake of 2011. So I am sad that I did not get to see the city before that, but I am also looking forward to seeing how a city recovers from such a horrific natural disaster.

Essential for one’s soul. With the rise of eBooks and online magazines, I do not know how libraries will transform, which worries me. But I still love going to libraries, the smell of books, and finding quiet nooks where one could hide.

I don’t know how to ride bicycles or drive cars or swim … every year they make my New Year’s resolution.

There are only patchy representations of North Korea in our popular culture – comedians dressed up as Kim Jong-il, Team America, that recent Interview movie. In a world where the Iron Curtain has come down, it is still Unknown. But Suki Kim knows North Korea, she’s been there many times. Suki is coming to Christchurch on Sunday 30 August as part of the WORD Christchurch Shifting Points of View events in the Christchurch Arts Festival. Her topic: On North Korea: Inventing the Truth and she’s in conversation with Paula Morris.

Her book Without you, there is no us: My time with the sons of North Korea’s Elite. A Memoir unveils what has been hidden. It starts with the death of Kim Jong-il in 2011 and then goes back into history, and into Suki’s time as a teacher at PUST- the all-male Pyongyang University of Science and Technology.

If this were the sort of story that invites readers to nod with empathy and walk away both satisfied and educated, I would say that I travelled full circle. But in truth my journey was barely half a circle, a sad one that could never be completed, because those who were at the center of the harrowing history are almost certainly long dead, or old and dying, and time is running out before their stories are lost in the dust of the past. (p. 11)

Suki shows us Pyongyang as a place of rules, bureaucracy, and regimentation. North Korea is full of constraints  – and the constriction is political, emotional, and intellectual. On some of their school trips, there are glimpses of starving people, and forced labour. It is a place where even the sons of the elite have an existence that is controlled, and devoid of freedom.  Everyone is watched, you are likely to be spied upon, and the very words you utter must conform or you might be reported. Suki wants to open the world up to her students, but knows she can’t:

It was a fine dance. I wanted to push them, but not too much; to expose them to the outside world, but not so subtly that no one would notice… Awakening my students to what was not in the regime’s program could mean death for them and those they loved … Awakening was a luxury available only to those in the free world. (p. 70)

Suki teaches, but she is continually taking notes for her book. She observes her students open up,  and how some lie and deceive.  I was swayed by her emotional currents:

And so I went from love to pity to repulsion and distrust, then back to empathy and love again, and these switches of feeling were confusing. I reminded myself that I did not come from a place where mind games were a prerequisite for survival to such an extreme degree, a place where the slightest act of rebellion could have unimaginable consequences. (p. 134)

This is a book that could easily be claustrophic. But it isn’t, because she provides such captivating views of the Koreas North and South, and family history, and her own emotional landscape. Her book will make you understand North Korea in a new way.

If you want to read more about this strange and fascinating place, I recommend the graphic novel Pyongyang: A Journey in North Korea by Guy Delisle. It captures that same alienness and constriction found in Suki’s story.

There seems to be a flurry of new books about North Korea. We want to understand.