A history book spanning one hundred years is nothing out of the ordinary, however what makes this book so unusual is that all the photographs have been fully and painstakingly redigitised in colour by Brazilian artist Marina Amaral. The detail and exhaustive research that has gone into ensuring the colours are correct is amazing. The black and white pictures come to life, bringing new meaning and poignancy to many famous photos that we are familiar with. It is a shame the cover is so dull and monochrome but perhaps this is to heighten the surprise of what is inside.

This book is an absolute treat and is beautifully produced by Te Papa Press. The blurb describes it as “lavish” and it really is. Highlighting old advertisements, photos (many hand-coloured, quite different from The Colour of Time, but just as beautiful) and paintings, the New Zealand alpine experience is brought to life. As an aside, I couldn’t get over how well-dressed and smart the people are in all the photos, no tatty jeans, nasty track pants or daggy shorts here, they all look incredibly glam and well put together in amongst the most stunning scenery.

Do you remember the 1974 Commonwealth Games in Christchurch? I do. I was on holidays and watched John Walker setting records on the track, while next door in the same complex, the Canadians and the Australians collected medals in the pool. My husband and his brother were in Christchurch and when they could, they caught the bus to Cathedral Square so they could get autographs from the athletes.

Years later, I moved to Christchurch. I never ran on the athletics track, but I did go swimming in the pool. I think I set a record for the slowest lap. I didn’t mind too much. I just enjoyed swimming in the pool where records were set all those years ago.

The park was damaged beyond repair in the 22nd February 2011 earthquake. For a long time, the site was a collection of broken buildings and long grass.

One day I drove by, and noticed some activity. Construction vehicles were unloading gravel and the site was being cleared.  Finally, good news – the site was going to become the new location for Avonside Girls High School and Shirley Boys’ High School. Two lovely new schools in our neighbourhood. That’s just part of it. A new Sport and Recreational facility and a re-built Christchurch School of Gymnastics are also planned.

On Sunday, 25th March, there was an open day, where we had the opportunity to meet with council recreation staff and school staff. The buildings are still under construction, so we couldn’t go inside, but we walked around the damaged golf course and tried to remember how it was and dream of new uses of the space. The golf course was a lot bigger than I remembered, and in places it had become quite swampy. It was amazing how quickly the course had gone wild.

What will we have? Have your say. The Council is asking for your feedback (until Sunday 9 April 2018).

I don’t know what the new park is going to look like, but I’m looking forward to using it again. 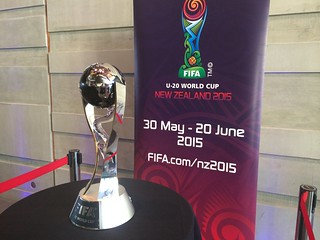 The FIFA U-20 World Cup has kicked off and will run until 20 June. Quite a few of the games are being played in Christchurch so you could even get along to watch a game or two.

The tournament is held every four years and there are teams from all over the world competing, including Hungary, Nigeria, Uzbekistan, Honduras, Brazil and of course New Zealand.

We have heaps of books in the library about football (or soccer as it widely known), from learning how to play the game to stories about soccer.

To find more about soccer try these:

For more information about the FIFA U-20 World Cup see their website.

It’s that time of year again. Junior sports clubs are gearing up for the winter sports season. It is time to get your children registered for their sport of choice.

A great resource you can use to find a club near you is the Libraries’ CINCH (Community INformation CHristchurch) directory which lists the sports clubs in the Christchurch, Selwyn and Waimakariri areas.

To save you time (we like to be helpful like that!), we have prepared some search links for you. Once you have clicked on one of the links below, you can then click on the locations shown in the left hand column to find the clubs nearest to you.

New Zealand has a wonderful tradition of sport fields filled with children on a Saturday morning. Most clubs have midget grades for the 4- to 6-year-olds, so it’s never too soon to start them. Plus watching the little ones is seriously cute! Have a chat with your wee one today.

Each time I go swimming at Dudley Park in Rangiora I pass a t-shirt signed by multiple gold medal winning Paralympic swimmer Sophie Pascoe. Not surprisingly I find this very inspiring. Therefore as soon as I heard she had an autobiography coming out I put myself on the hold list. The book arrived for me last week and it proved to be a fascinating read.

I read quite a few sports autobiographies and sometimes find they don’t go into as much detail in some areas as you might like. This is not the case with Sophie – her book is refreshingly open, honest and full of personality.

Although only 20 years old Sophie –  from Halswell – has crammed a lot into her life. In the first chapter, her father Garry talks candidly and movingly about the horrific lawnmower accident which led to her lower left leg being amputated. Becoming an elite athlete while still at school presented unique challenges and opportunities – including opening a building at her school named in her honour while still a student there. In particular, I found it really interesting to read about the dedication and sacrifices needed to compete at the top level, as well as the will to win and the frustration of coming second. Her hope for the future are also discussed.

Who would like this book? Anyone! Whether you are interested in sport, Cantabrians, biography, those overcoming adversity, interesting personalities or simply curious this is a worthwhile read.

If you are interested in any aspect of swimming have a look at our swimming resources page.

Who inspires you? Have you read any memorable biographies or autobiographies this year?

A day spent golfing is some people’s idea of heaven. But anyone who’s tried to play the game will know the special corner of hell that is the mental anguish of trying to play consistently well. Trying to keep co-ordinated, avoid hazards and have a good short game takes dedication and a lot of practice.

Golfers are spoilt for choice in Christchurch. The library has a page of excellent golfing resources to help you improve your swing. There’s pages on the recently-completed NZ PGA Championship, New Zealand’s oldest golf tournament, and the NZ Women’s Open, both of which are played in Christchurch. The women’s open will be played at the new Pegasus Golf Course, just north of the city, in February.

As you can tell, I’m desperately trying to avoid mentioning Tiger. So, without discussing adultery, horrendous golf puns or bad jokes; with absolutely no mention of Tiger Woods and the 2009 flatulence-supression ‘scandal’, or anything like that,  please tell me:

Do you have a favourite golf course in Canterbury? And what’s your best (or worst) golfing experience?

Many a workplace will be discussing the Kiwis’ gutsy display on Saturday night to down Australia and win the 2008 Rugby League World Cup. What a victory! It is the first time New Zealand has won the 54-year-old event, and comes 100 years after the first Māori professional team toured Australia and Great Britain. The tour was the beginning of the rugby league code in the southern hemisphere.

Throughout the history of the code in this part of the world, the contribution of Māori players has been significant and enduring. 100 Years: Māori rugby league 1908 – 2008 by John Coffey and Bernie Wood, charts the twists and turns of the history of league in Aotearoa with particular focus on the Māori teams and players who in the words of the authors have ‘followed in the sprig marks of Albert Asher and his men’.

A fascinating read, the book documents tour details, rule changes, and the on- and off-field wrangling that happened through the years. There’s plenty of recognisable names – George Nepia, Sorenson, Edwards, Kemp, Berryman, McGahan, Friend, Tamati – the list is long. But for me the joy of this book was in some of the little-known players and their stories: Riki Papakura, who played for Warrington in 1911, and Huatahi Turoa Brown Paki who was recruited by St George in 1922 and played for them in 1923. Paki’s brother George played in Sydney in subsequent years. More impressive was the career of Len Mason, who played 475 professional club games between 1927 and 1940, mostly on gluggy pitches in Wigan winters.

The photographs alone make this book worthwhile, but it is an intriguing read, and one that sheds a great deal of light on the history of league in New Zealand. It’s a sport where victory isn’t automatic and the wins are all the sweeter for it.