I love the biennial public art festival SCAPE. You can read about what’s coming, but there is nothing like seeing the art in situ. I disagree with Christopher Moore’s column in The Press. Our central city is the ultimate canvas – art within it gives us a sense of possibility, of imagination, of beauty. We need that.

Stay by Antony Gormley is the legacy public artwork, joining such Christchurch landmarks as: 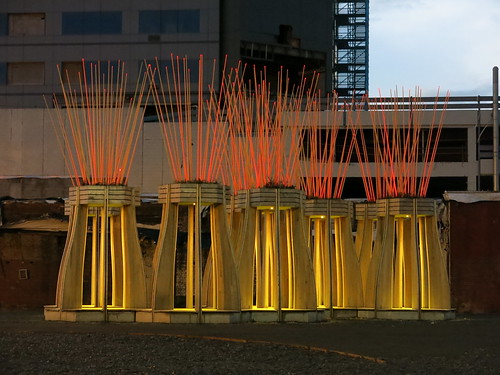 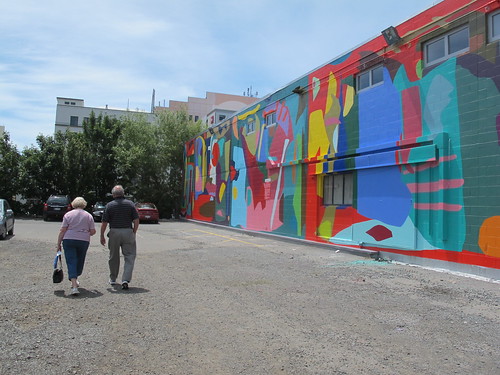 There has been a flurry of media coverage. Try these to get a good sense of what’s on its way:

The first I heard was Hamish Keith on the radio – they were friends, as were Jim and Mary Barr.

There will be many tributes to come. Like Courtney Johnston  I never met the man, but I have had many good, bad and indifferent experiences with his work, at many times and places. Always a twist often a challenge and a surprise.

The Christchurch Art Gallery has a few of his works (where he is know by the more formal name of Donald Sinclair Driver) and one work has a brief bio.

Driver has lived in New Plymouth since 1943. His first job was with a dental technician learning how to mould, shape and cast materials. He took night classes in drawing and later learned woodwork, welding and pottery. He has been exhibiting his work since the 1950s and has travelled widely, including time in North America, Asia and India.

‘With spirit: Don Driver a retrospective‘ toured New Zealand (including Christchurch) at the end of last century. Although our gallery is not open at the moment they have an eclectic selection of articles, and images to explore to help remember an art treasure no longer with us.

Some fine looking new art books have arrived in the library recently.  My favourite is probably a weighty tome on the Mexican artist Gabriel Orozco.  The artist has a prolific and varied practice making sculpture, painting, photography and video. This book features significant works since the 1980s, and Orozco’s output is so varied I find it hard to describe.  Certainly the everyday object is crucial to his work; he twists the known into something playful and imaginative.  Fortunately the essays and interview within provide a lot of insight.  If you want to become familiar with Orozco before placing a hold on this book, take a look at the site for the very good PBS series Art 21 in which he features.

Local artists are providing some goodies as well.  Nightingale features the evocative watercolours of Christchurch artist Brenda Nightingale.  The familiar painters’ subject matter of children, lakeside outings and lonely dogs are transformed into something haunting. The sketchy, blurry technique beautifully captures the ephemeral nature of these moments. There is also something a little eerie in the images, which somehow remind me of Lord of the Flies.   END_OF_DOCUMENT_TOKEN_TO_BE_REPLACED