Roald Dahl Day is coming up again on 13th September it is extra special this year. If Roald Dahl were still alive he would be celebrating his 100th birthday!

There are heaps of special events taking place all over the world, and of course we are celebrating at Christchurch City Libraries.

Have a look at our events to celebrate Roald Dahl.

He wrote so many wonderful books that children and adults alike love. Quite a few of his books were made into movies, including Fantastic Mr. Fox, The Witches, Matilda, and Charlie and the Chocolate Factory and The BFG have had two different movie versions. We were lucky to have a special preview of The BFG movie and it was absolutely fantastic!

There are lots of different ways that you can enjoy Roald Dahl’s stories in the library. We have paper books, eBooks, audiobooks, and DVDs, so you can get Roald Dahl stories any time of the day or night.

Check out all the Roald Dahl stories that we have in the library and make sure you also check out the Roald Dahl website. There is heaps of information about Roald Dahl as well as activities, games and quizzes that you can do.

A big cheers for Mr Roald Dahl, born 13 September 1916. Yup, he would have been 99 this year. His work has given so much pleasure around the world that there’s an actual Roald Dahl Day – and it’s the day of his birthday, of course.

I’ve read Roald Dahl as a kid – Charlie and the chocolate factory was my fave. The version illustrated by Faith Jaques is the one I remember, not Quentin Blake. And later I loved Switch Bitch, the sexy short stories, and that murder story Lamb to the slaughter where a piece of mutton is a genius murder weapon. Now it’s full circle, and am enjoying the delights of reading him to my daughter. Her first long reads were The BFG and Matilda. Matilda is the ultimate library kid, a real posterchild for reading:

“So Matilda’s strong young mind continued to grow, nurtured by the voices of all those authors who had sent their books out into the world like ships on the sea. These books gave Matilda a hopeful and comforting message: You are not alone.”

The library is full of Roald Dahl, books, eBooks, audiobooks, and Chʻalli wa chʻokʻollit kongjang (Charlie and the chocolate factory – in Korean), Rohngngahnchawkgohlaatmahhahtsahjahn  (Thai) … So, celebrate his Dahl-ness – if you want to have a Dahl playday, there is an awesome activity pack on the Roald Dahl Day site. 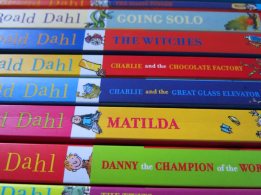 2014 is the 50th anniversary of the first publication of Charlie and the Chocolate Factory – can you believe it?! If Charlie Bucket continued aging, he would be at least 60 by now, and the Chocolate Factory would look very different after the unionisation of the Oompa Loompas. September 13 was Roald’s birthday and is now celebrated world-wide as Roald Dahl Day. Our libraries will have Roald Dahl activity sheets available for your little human beans.

Charlie and the Chocolate Factory has sold over 20 million copies and is available in 55 languages. My first experience of it was having it read to my class at North New Brighton Primary. I think I was in Standard Three, but Mr Jefferies tended towards weightier books, so maybe it was earlier. We all loved it, then when we discovered there was a  sequel, the wait for it from the school library was unbearable. I’m not sure I finished Charlie and the Great Glass Elevator though, which for school-aged me was unimaginable. I think Charlie and the Chocolate Factory was just so good that any sequel would fail to live up to expectations.

Apparently, Roald had started writing a third book: Charlie in the White House, one chapter of it may be on display at the amazing Roald Dahl Museum and Story Centre in Great Missenden, Buckinghamshire (they hadn’t gotten back to me at time of posting).

In honour of the 50th anniversary, Lucy Mangan has written Inside Charlie’s Chocolate factory. The picture-packed book explores the influence the book has had on our culture and its history. The release of an unpublished chapter from an early draft of the book recently and the debate over a new cover that some found creepy and raunchy, shows that public interest in Charlie stays as vibrant as the book that has engaged us for the last 50 years.

As the world celebrates Roald Dahl Day the focus is very much on his mega selling fantastic childrens books, many of which are available as audio books or have been made into films.

But there are other sides to Roald to remember. He himself recounts his early life in Boy and Going Solo

But as Roald Dahl : a biography by Jeremy Treglown tells

like his fiction, his personality was singular, forceful and provocative. He was an adventurer, gambler, connoisseur, philanthropist and troublemaker; as a devoted but frequently unfaithful husband; and as a fond, demanding, but sometimes chilly parent.

The irregulars : Roald Dahl and the British spy ring in wartime Washington recounts

the story of young writer Roald Dahl who is assigned by His Majesty’s Government to Washington, D.C. as a diplomat to gather intelligence about America’s isolationist circles. In the course of his “spying,” he meets or works closely with David Ogilvy, Ian Fleming, and the great spymaster William Stephenson (aka Intrepid)

His life with the actress Patricia Neal is well documented in her memoir, As I Am and later portrayed by Glenda Jackson and Dirk Bogade in the movie The Patricia Neal Story.

For many adults they met Dahl through the televison series Tales of the unexpected – which are themselves based on the series of short stories –  Someone Like You,  Kiss Kiss and Switch Bitch.

He even wrote a few screenplays, most notably Chitty Chitty, Bang Bang and the James Bond film You Only Live Twice.

And I won’t even mention Gene Wilder and Johnny Depp and the two strangely same but different Charlie and the Chocolate Factory movies.

It’s Roald Dahl’s birthday on Sunday and children all over the world are celebrating Roald Dahl Day to remember the storytelling genius that he was.  There are lots of things you can do to celebrate:

1. Read some of Roald Dahl’s books, such as Charlie and the Chocolate Factory, The Twits, Revolting Rhymes, or Fantastic Mr Fox.

2. Eat lots of chocolate (pretend you’re Charlie and you’ve just been given a whole chocolate factory!).

3. Watch a movie based on a Roald Dahl book, such as James and the Giant Peach, Matilda or Willy Wonka and the Chocolate Factory (the musical version starring Gene Wilder).

4. Make some revolting recipes.  You could use the Revolting Recipes book for some ideas or just make up your own.

5. Take a test to see what Dahl character you are or colour-in The Twits.  These activities can be found on the Roald Dahl Day website and we also have some that you could do if you come into Central Library at the weekend.

Whatever you do, just have fun and be as wacky as you can.