Perhaps the question should be who made pie? Art of the Pie by pie-guru Kate McDermott is this month’s Big Library Read (March 16-30) on OverDrive, and quite frankly who doesn’t like pie? We can all take this Pie together right now – the Big Library Read means library customers around the world can simultaneously borrow an eBook.

I personally love a good pie and also appreciate Kate’s rules of pie making and life:

This book is American so we are talking sweet – apple pie, pumpkin pie and pecan pie and many more. We have pastry options including gluten free, vegan and no-bake and even tips for high altitude pie making.

What, no steak and cheese? Never fear there is a section on Meat Pies where you pick your own seasoning. Other international classics such as shepherd’s pie and English pork pie get a mention too.

Kate McDermott has taught the time-honoured craft of pie-making to thousands of people. Her pies have been featured in USA Today, The New York Times, The Boston Globe, Real Simple, Oprah.com, NPR and more. In the Art of the Pie she shares her secrets to great crusts, fabulous fillings, and to living a good life. Kate provides dozens of recipes for all the pie combinations you can dream up with hints and tricks helpful to even the most experienced pie baker.

Check out Art of the Pie and remember always blow on the pie! 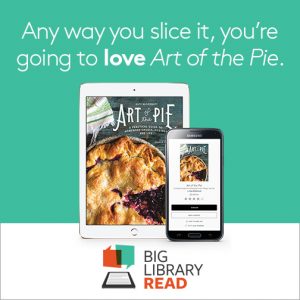 Find Art of the Pie in our collection.

More about the Big Library Read

Big Library Read is an international reading program that connects millions of readers around the world simultaneously with an eBook, using Overdrive one of our eBook platforms. Discussions about the cookbook, recipes and more can be found on BigLibraryRead.com. The free program runs for two weeks from March 16 to 30 2017 and to get started reading, all that is needed is a Christchurch City Libraries card and PIN/password

It is lunchtime and I am a little hungry and this situation has in no way been helped by all the chat this morning about the results of the annual Bakels New Zealand Pie Awards which have just been announced.

Certain “factions” in my workplace are very pleased to see a potato top pie take out the Supreme Award. Is this a sign that potato top is in the ascendancy once more? Is the time of gourmet fruit pies in the top spot done?

Either way it’s making me hungry so I hope the pie fairy visits our house at dinnertime. But just in case the pie fairy is something my brain made up in a fit of pastry-starvation, the following titles might be of help. 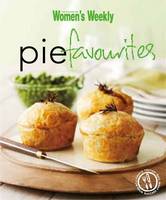 We have The Hairy Bikers’ Perfect Pies book at home and the recipes have so far been delicious so you can take that as a personal recommendation, or try your luck with a search for pie cookbooks in our catalogue.

What’s your favourite pie? I like a steak and cheese but also have a fondness for ones with curry in them.

It’s winter and I am not advocating heading for the snow, but to the kitchen. This a winter food rave. You see, for me the best thing about this season is… WINTER FOOD!

Does this grab you like it does me? Steak, Caramelised  Onion and Red Capsicum Mustard Pies from a simply named but lip-smacking cookbook: Pie, by Dean Brettschneider. It helps that the pictures are of perfectly made pastry, of course. Mine never looks like this, more of a patchwork quilt effect. Normally pastry is something I avoid as being too fiddly, but some of these pies are going to have to cross my lips and settle on the hips.

I have become a bit of a cookbook stalker since working daily with library books. One I came across was Slow by Allyson Gofton. Most of the recipes I had never seen before and that’s always a huge drawcard. I’ve  been a bit wary of using the slow cooker for vege dishes, but the North African Vegetable & Lentil Stew, on page 279,  was a huge success and the eggplant held together beautifully.

Smoked Haddock and Shrimp Chowder and/or Yellow Split Pea and Frankfurter Soup from Soup Kitchen have also taken my fancy. The latter sounds interesting, but could have some startling after effects. It’s one of Nigella “Who needs chocolate” Lawson’s contributions. Among the other contributors are Mr “Beep Beep” Ramsay, Jamie “Lips” Oliver, Rick “My Hero” Stein, and Hugh “Three Good Things” Fearnley-Whittingstall is the editor. It’s hard to go past soup and in my freezer there’s Tomato and Roast Capsicum Soup (blended with  a few Jalapeno peppers), waiting for suitable soup weather… and possibly the purchase of a fire extinguisher.

If there’s room, and it pays to leave some, What’s for Pudding? used to be the greeting we offered my poor mother as soon as we had finished the main meal. Two of my childhood faves, Bread and Butter Pudding, and Golden Syrup Steamed Pudding are represented in Alexa Johnston’s yummy book, but Gingerbread Upside Down Pudding or Apricot Betty sound even better.

Hungry now? What are your winter food favourites?  Much used cook books? Did you bring any family dishes from your homeland?

This leaves me feeling and probably looking like a Roly Poly Pudding!

I’ve never understood what the origin of this saying was (perhaps someone more learned would care to enlighten me).  I would have thought a pie in the mouth would be more appropriate (and obvious) but there you go.  For me, winter is all about comfort food and there’s a lot that’s comforting about a good pie.  We New Zealanders have something of a love affair with that staple of stodge as is evidenced by the nostalgic and wistful way in which many people fondly recall the days of the life-saving, tummy-lining pie cart.

New publication, The great New Zealand pie cart, is a fitting tribute to a largely forgotten pie-slice of Kiwiana.  The book includes reminiscences of pie carts of yore, including one from Ray Columbus (who used to frequent the carts around the Cathedral Square as a rock ‘n’ rolling teenager).  The book covers carts from Kawakawa in the north to Stewart Island in the south and just about everywhere in between.

Another book that panders to the Kiwi preference for pastry is The great New Zealand pie guide : a tasting guide to some of the best Kiwi pies up and down the country which gives pie lovers an informed travel guide to the bakeries that make pies of note of the sort recognised in the annual Bakels Pie Awards (held every July).

Now, if only there were a book about tomato sauce.  That would be the only fitting literary/culinary accompaniment…