Dooling is a place where people live on a knife edge; work hard, drink hard. Women around the world bear the brunt of this in their daily lives. Some have gone to prison for fighting back.

Tiffany lives in a trailer at the edge of a forest. She’s regularly beaten by the man who has enslaved her to drugs.

Superhumanly beautiful, a naked woman comes down from the forest and changes everything. 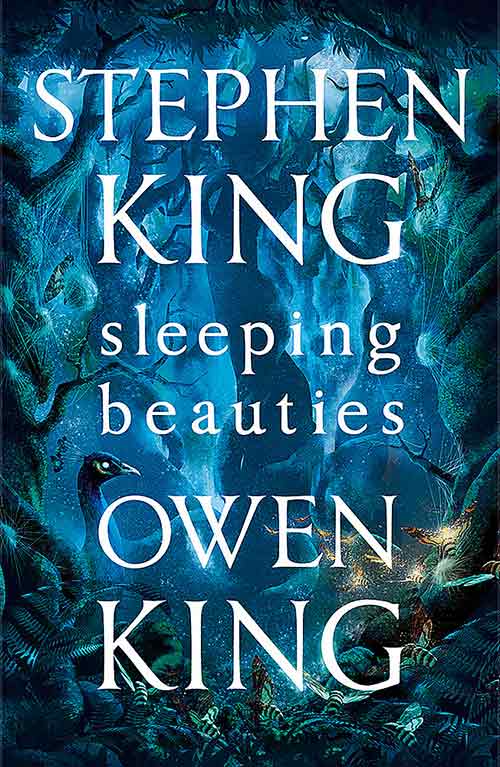 All over the world women succumb to an enchantment. (Or sickness depending on which books you read.) Falling asleep, they form moth-like cocoons around themselves. The women are not dead, merely sleeping.

Where has their consciousness gone? Wake them and you’ll find out – in a terrible bloody way. They turn into very angry zombies.

Lila is the local Police Chief. She loves her husband. Or does she? Suspicious of his love, resentful over the pool he made her agree to (first world problems, LOL), Lila has a choice to make.

Fighting the curse valiantly, (and not without the aid of some confiscated contraband), Lila eventually closes her eyes and crosses over… to the world beyond the huge tree in the forest; a world without men. The idea appeals to many – inmates like Jeannette, wives like Elaine.

Without their women, the men left behind get depressed, go nuts, drink and burn things. Some prepare for battle.

If Evie, the woman who began this series of events, is killed in the inevitable battle between good and evil, the women stay in the place beyond the Tree forever.

If she lives, they get to choose if they want to stay in what they have come to call “Our Place”, or come back to the world of men. It’s a difficult choice for some. (The honeymoon period only lasts about eight weeks according to S.K.)

There is a suggestion here that the characters are at war with Nature and God. Has Evie come from the Garden of Eden?

“Once I’m dead, the portal between this world and the land of sleep will close. Every woman will eventually nighty-night, every man will eventually die, and this tortured world will breathe an enormous sigh of lasting relief.” Evie, p.362

The tree motif is a great link to the world of faerie. Trees have been doors to other worlds (than this) in many stories. The Kings enchant the normal world with ‘fairy handkerchiefs’ (spider webs in the grass), clouds of moths, a snake, and a tiger…

Always an advocate for women (see Big Driver) this latest offering is well written, topical (the senior King jokes about Trump), and thrilling without being too brutal.

Stephen and Owen have crafted a riveting read with the characterisation that fans love him for. He even throws in a book group or two.