Secrets, spies, and free speech was stunningly topical, and the chair and panellists were knowledgeable and articulate, and pretty funny to boot (I actually got sore cheeks). Discussion ranged around ideas of surveillance, free speech, state control, spying and shutting down debate.

Luke Harding is a Guardian reporter who was written on Edward Snowden and the National Security Agency; Nicky Hager is headline news for his investigative work in Dirty Politics; and Richard King’s book On Offence argues that free speech is meaningless unless it includes the freedom to offend. Joanna Norris, editor of The Press chaired the session – most appropriately as she is also the chair of the Media Freedom Committee.

Luke is concerned about mass surveillance and how information is “all being hoovered up and analysed. The rise of authoritarian states has seen state actors trolling individuals, armies of cyber bloggers causing people to retreat and exit from the conversation.

Edward Snowden gave his information to responsible journalists. He is an epochal figure, part of the “biggest, most important story of the 21st century”. Working on this story was fraught. There were incidents of mysterious workers laying down cables outside his work and home, and occasions where the text on his screen would mysteriously delete.

Of the famous laptop smashing incident, Luke said it was “half Stasi, half pantomime”.

Richard King had plenty to say about the Australian situation, and bigotry. He reckons “bad speech” should be allowed but we should “call out the bigots and haters”. Beware “the great steambath of censoriousness”:

On questions of principles, slopes are always slippery.

King was a master of pithy and revealing observations”

Julian Assange is the tiny elephant in the room.

The claim that something is offensive is taken as an argument in itself.

Nicky Hager classed himself as a moderate in the surveillance debate, seeing the need for monitoring those who could hurt people. At the same time he thinks society’s fear about surveillance is insidious.

He said of leaks: “There is nothing special about a leak being illegal … people are going to feel intruded upon”. Most material didn’t meet the public interest; he stripped out names from some of the source material before publishing it.

We have a government that was faking; manufacturing a sense of friendly, “she’ll be right …”

while major New Zealand corporates were paying to have opponents – including those in public health – smeared.

Politics is so much easier for your side by destroying opposition. It is really East Germany.

He was sharp and funny, explaining the process of how Dirty Politics came to be. Meetings in parks, and an initial plan to tweet out whole blast of information (Whaledump being in the news again today of course).  His source’s motivation is simple:

Whale Oil is a bastard and let’s do him over … he’s a prick”.

Maire Leadbeater was a spokesperson for Auckland CND in the 1980s. She is the daughter of local Canterbury hero Elsie Locke, who was renowned for her fiction, and also for her role as a peace campaigner. Elsie wrote the book Peace People on the peace movement up until 1975. Maire’s new book Peace, Power & Politics How New Zealand Became Nuclear Free – more than five years in the making – is a continuation.

People Power saw Maire was in conversation with investigative journalist Nicky Hager. It was a brilliant, potent discussion of politics, peace and power. The near-full room had many listeners who had been part of the peace movement with both Maire and Nicky – it was a place of people who respected each other and were keen to listen.

The book has a strong photographic element, and the session began with a slideshow of images. Maire said:

There is no better way to describe a demonstration than with a photo.

The discussion ranged through the 1980s: 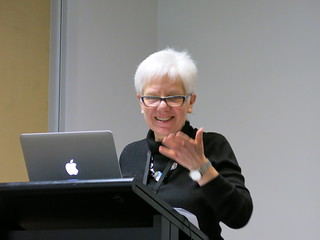 Maire had a lot of interesting observations on foreign policy. Her highlight was when New Zealand helped with Bougainville in 1997. In that case, New Zealand used its independent image to very good effect – we should do it more often.

Foreign affairs should be subject to democratic input … It is so important to be exposed to what is going on.

She also wrote about East Timor. Negligent Neighbour: New Zealand’s Complicity in the Invasion and Occupation of Timor-Leste charted the hypocrisy of New Zealand’s support of Indonesia, using the OIA a lot to get access to documents and information.

Maire wished New Zealand foreign policy focused more on the self determination of nations, instead of constantly looking at World War One and Two and battles.

Writing the book – and researching the next

Peace, power, and politics took around five years to write. Maire interviewed people from peace movements all over the country. She made use of “wonderful libraries” like the Macmilla n Brown and Alexander Turnbull.

I love being in the archives and finding things out.

She is already researching her next book on MFAT and West Papua. The documents are “shocking” and are not redacted as those obtained under the OIA are.

“Thank goodness for people who get to the truth”

Luke Harding was in the audience, and asked about surveillance and infiltration. Maire said the Philippines Solidarity Network was being watched by the SIS. But “it doesn’t stop you doing what you’re doing”:

Thank goodness for people who get to the truth … keep pushing and pushing.

A new book by investigative journalist Nicky Hager focuses on the past six years of the John Key-led Government partly through email exchanges between blogger Cameron Slater and National party figures.

It’s been in the news and is already out of print.

So we like many are waiting for the book in paper – but in the meantime we have it as an eBook. Hot off the digital press.

If you want to wait for the paper book you can place a hold. Or read his earlier books.

What (or who) are you most looking forward to at WORD Christchurch?

I enjoy the way that the Christchurch festival suits people meeting and talking in a relaxed way (compared, for instance, to the crowds at the equivalent event in Auckland).

It is easy to assume that everything we need to know is online, but I am often in the library and I find that librarians are a researcher’s friend.

I sing in a choir.

and Nicky Hager‘s books at first sight appear to be quite different beasts. Investigative journalist and author Hager needs no introduction, he has been illuminating New Zealand’s political, military and intelligence underbelly since 1996. His books are weighty tomes (metaphorically if not literally) replete with formidably detailed research. Zen under fire by Marianne Elliott, former United Nations’ human rights officer and lawyer, uses a more personal tale-telling technique to describe her time in Afghanistan and its impact on her, her nearest and dearest. Surprisingly the books taken together are complementary and sympathetic, providing a picture of Afghanistan, big and small.

Both Hager and Marianne felt compelled to write due to the lack of information on Afghanistan despite New Zealand’s involvement there. Further Marianne wanted to tell the stories of her Afghani colleagues, “to use the location and time in history to inform people”, to give context and reveal the discrepancies between the theory and practice of humans rights in Afghanistan.

For research Marianne relied on the almost verbatim notes she’d kept of interactions with warlords and non-governmental organisations. Her own “tenacious memory” informed the rest. Hager spoke to serving soldiers, senior officers and collected intelligence and military documents in the tens of thousands. The sheer volume of evidence “nearly melted down his brain” and Hager initially struggled to reduce this mountain of paper and find the essence.

Finding the “voice” of their respective books had challenges for them both. Hager didn’t want a critical, nagging voice. He wanted Other people’s wars to be a nation building book explaining who we are as New Zealanders, and to be read by the military, military families and the wider New Zealand public especially the young. Marianne wrote for her friends, women she knows and loves but who sometimes struggled to understand her experiences. She also felt strongly that most New Zealanders wanted to understand Afghanistan and be able to access nuanced information. The personal story was for her the best vehicle

Asked about what the next five years held for Afghanistan neither author was optimistic. Nicky Hager believes the slow collapse of Afghani society is inevitable once the West withdraws. Marianne likewise, despite her reservations about the West’s original involvement in Afghanistan, fears the lack of long-term political commitment will result in hardship for the many people who have experienced improved lives since Western forces entered Afghanistan. The transition needs to be slow and thoughtful and she hold real reprisal concerns for the many Afghani who have worked alongside the West.

This was a carefully structured and sensitive exploration of the writer’s craft rather than a febrile, political polemic. Well attended, the audience provided some thoughtful and topical questions.