Since 1975 New Zealand has celebrated Te Wiki o te Reo Māori, recognising the Māori language as a unique taonga for all New Zealanders.

Christchurch City Libraries have supported the kaupapa of Te Wiki o Te Reo Māori over the past years in a number of ways, endeavouring to promote the week as a time for learning and celebrating te reo Māori. Check out the Reo Māori option on our self-issue kiosks during Te Wiki o te Reo Māori this September.

The theme of Te Wiki o te Reo Māori 2018 is “kia kaha te Reo Māori – strengthening the Māori Language”. Over 30 years on from recognition as an official New Zealand language, there are now many ways we can strengthen our Māori Language skills. Whether it be from the comfort of our home using online resources provided by groups such as Kotahi Mano Kaika – the Ngāi Tahu Reo Māori initiative or Te Taura Whiri i te Reo Māori – the Māori Language Commission; or attending free classes offered at organisations such as Te Wānanga o Aotearoa, the opportunities are endless.

Let’s be honest, it isn’t easy learning a second language, but nothing worthwhile ever came easy. It is a doorway to another world view, another perspective. It is a journey and like all journeys there is a lot to be discovered about this language and about ourselves.

Te Reo Māori (the Māori Language) is not a ‘one week, once a year’ language, it is a living language and as such it should be used at home, at work, at school, everywhere and anywhere. As the saying goes ’a little word can save a language’, so why not give it a go, start small and aim big! Help us strengthen te Reo Māori within our community, within our whānau (family) but most of all within ourselves!

Recommended title: Māori at home by Scotty and Stacey Morrison

Māori at home by Scotty and Stacey Morrison is a fantastic starting point if you are looking to increase your usage of te reo Māori at home. With 18 different sections, the book covers handy words and phrases to use around behaviour and chores, before and after school, at the playground or supermarket.

One of my favourite sections in this book is the one on Te Ao Matahiko – The Digital World. As our families and children embrace the latest technological advancements keeping up with all the new kupu becomes quite important. With that in mind I have found Māori At Home really useful in our whare. A few of my favourite handy phrases from this book:

Māori at home is an easy read and a very functional resource. If you haven’t already I encourage you to have a read, introduce a new Māori phrase into your family’s daily routine.

Throughout Te Wiki o te Reo Māori we’ll be blogging about ways you can help strengthen the reo.

The theme for this year’s Māori Language Week is –

During te wiki our normal Wā Kōrero (Storytime) sessions for preschoolers will have added stories and songs in te reo Māori.

We’ll be having a couple of Ngā Pakiwaitara (bilingual storytimes) sessions with even more te reo, delivered by Whaea Rochelle from our Ngā Ratonga Māori team.

And our wharewhare (housie) event at Linwood Library, 3.30-4.30pm Thursday 13 September is perfect for the whole whānau to join in with.

If you enjoy some waiata (and why wouldn’t you?) head along to one of the kapa haka performances by local tamariki that we’ll be hosting during the week.

Court Theatre in the Shelves

As part of New Zealand Theatre Month, during September actors from the Court Theatre will read extracts from their favourite Kiwi plays – including a very special Māori Language Week performance which will take place on Thursday, 13 September at Upper Riccarton Library at 10.30am, and at South Library at 3.30pm.

After their readings, the performers will tell you why they’re drawn to the piece they perform, what it is to be a theatre practitioner in this country and answer any questions you might have. So, come along to see the best Kiwi theatre amongst the shelves at your local library.

Te Reo Māori at the library

Adding te reo Māori to your library experience can be as straightforward as the tap of a screen – why not simply try out the reo Māori option on our māu e tuku (self issue) machines?

Or learn a new kupu (word) by reading our bilingual library signs or even just learn to say the Māori name of your local library.

Practise your reo at a library café

Order your drink of choice in te reo Māori at any of the cafés in our libraries (South, Upper Riccarton and Te Hāpua: Halswell Centre) or at The Kitchen café on the first floor of the Christchurch City Council building on Hereford Street and from 10-16 September you’ll get an extra sweet treat to go with your drink. Need help with how to place your cafe order in te reo? Te Taura Whiri o Te Reo Māori (The Māori Language Commission) has produced this fantastic guide to awhi you. 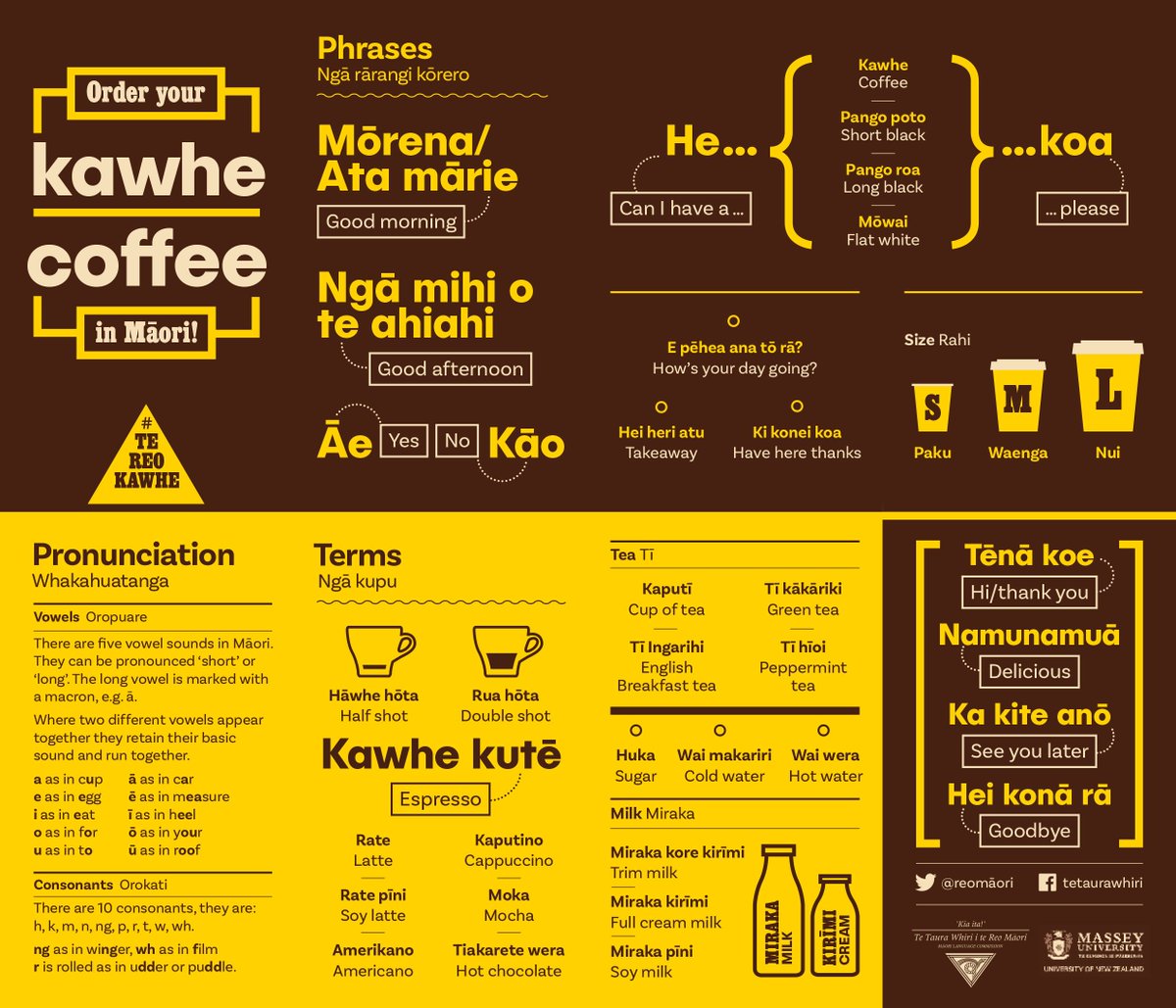 There are many resources available for anyone wanting to strengthen their te reo Māori knowledge, for both adults and children.

If you know of other resources, events or initiatives in Ōtautahi to help people celebrate Te Wiki o Te Reo Māori, please feel free to let us know about them in the comments below.

30 years ago, on the 1st August 1987, the New Zealand Government passed the Māori Language Act 1987 making Te Reo Māori an official language of New Zealand. While this should be celebrated, it is worth noting that it took 127 years for the indigenous language of this Country to be formally recognised by the Crown.

I had initially planned in this blog to recount the various ways that the speaking of te Reo Māori was suppressed over those 127 years. I was going to outline the various Crown policies and laws that were implemented to ensure that the language was suppressed and literally ‘beaten’ out of Māori. Laws such as Native Schools Act 1867 that enforced the non-speaking of te Reo Māori in public spaces, in particularly schools.

I had intended to remind people that “It takes one generation to lose a language and at least three to restore it”. Thus given my previous statement it is no wonder that te Reo Māori was in a complete state of decline by the late 20th century, beginning the proactive movement to rejuvenate and revitalise te Reo Māori within all aspects of our lives.

But that all changed on Saturday morning while watching a video post from a prominent te Reo Māori tutor.  He, along with his whānau, was abused in their local supermarket in their hometown for speaking Māori to each other. The tutor and his partner had made the decision to raise their children in te Reo Māori. Therefore, by their own choice, they speak Māori to their children and around their children wherever they are.

Imagine while talking among themselves, their shock being confronted by an irate woman telling them in a loud aggressive voice “this is New Zealand, we speak English here not that gibberish!” Aware of their children, they thanked the woman for her opinion and continued on with their shopping. A few minutes later, while the son was speaking to his mother in te Reo Māori, the woman started to mock the boy, telling him to speak English, the real language of this country. Naturally the parents interjected, politely rose above it, collected their children and shopping and left.

Naturally I was angry and sickened that someone would do this to a child.  But more importantly, I was sad and disappointed that in this day and age there are still people with these antiquated views.  We might be an educated and progressive society, but for some people it’s still 1867.

But don’t be disheartened. When we measure the tangible achievements of the last 30 years, we clearly see how far the revitalisation of te Reo Māori has come. How well this rejuvenation has worked:

Ah yes we have come a long way in 30 years, we do have much to celebrate.  But imagine how much more we could have achieved if we, as a nation, had embraced te Reo Māori 127 years ago. All New Zealanders would be bilingual for starters. There would be no need to repair 127 years of attempted cultural and language genocide. All New Zealanders would know the true history of their country. We would perform (properly) more than one haka for all occasions – and understand them. We would all sing both versions of the National anthem. These are just some of the things WE could have done. But we didn’t do that and now we are where we are.

Sadly haters are always going to hate.  What happened to that young Māori whānau the other Friday night vocalised thoughts born of ignorance and fear of the unknown. This an evolution people, not a revolution. Yes this might be New Zealand and we might speak English here, but the indigenous language is Māori. A language I, like that young whānau, are proud to reclaim as our birthright. Learn it, live it, love it!

So, 30 years on how far has the revitalisation of te Reo Māori come I ask? Well, a lot further than some expected, but considering that incident in a large supermarket in Hastings, perhaps not as far as most of us would have hoped.