Love reading and drawing your own comics? Do you want help with your drawing, assistance with your technique and tips on comics, publishing etc and a free comic? All of this for no charge? Right then get yourself signed up for our free comic drawing workshop at Papanui Library with Spencer Hall, artist/cartoonist. The workshop is for ages 12-18, registered attendees only and a limit of 30. We won’t let you go hungry either, there will be pizzas from Hell. 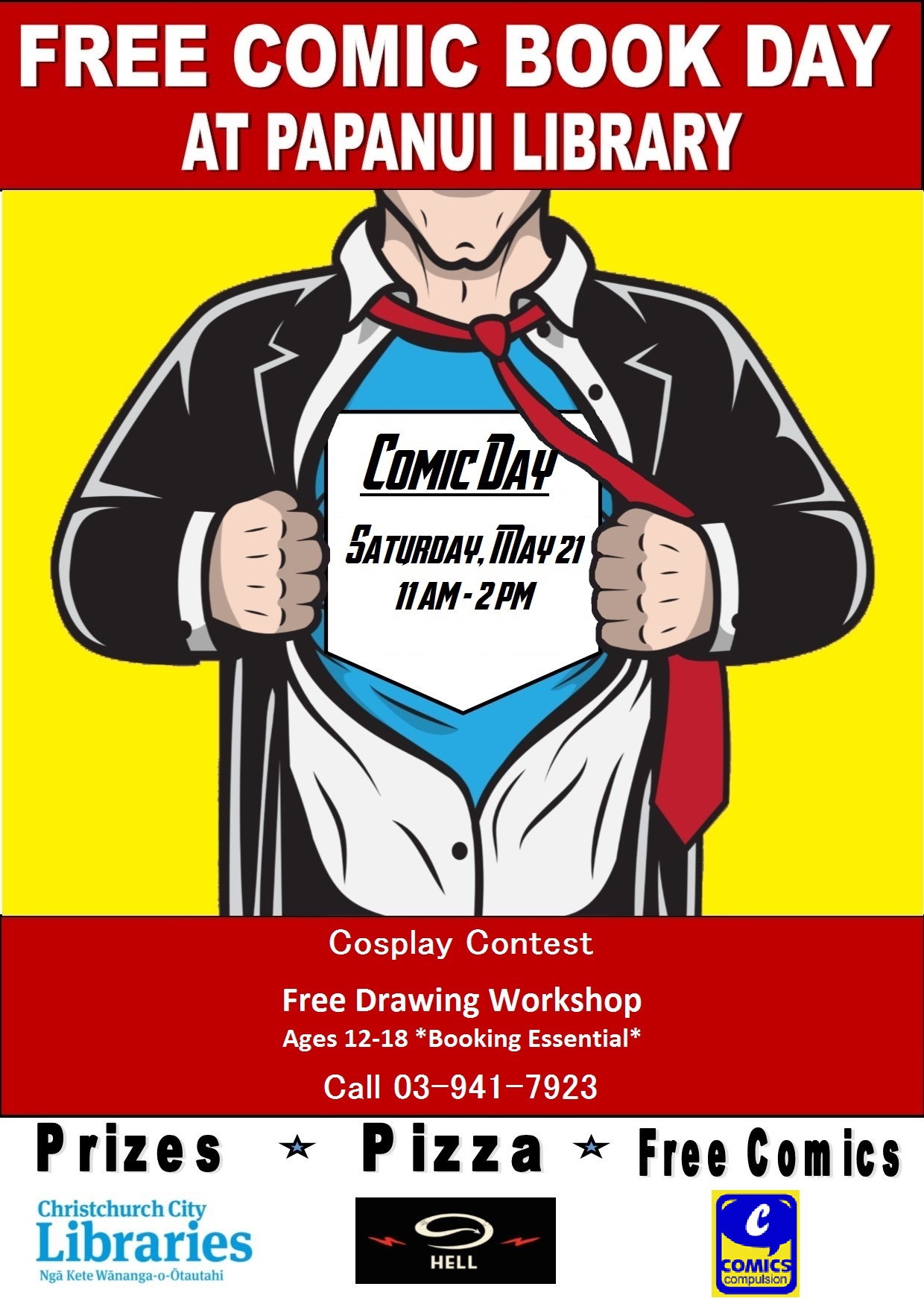 There was a waiting list of disappointed young cartoonists last year so don’t delay, break out the light sabers, shake out those capes, slap on the face paint and come dressed as your favourite comic book/Manga character and be in for a prize.

International Free Comic Book Day is on Saturday 7 May this year but our event, which will include free comics courtesy of Comics Compulsion, will be on Saturday 21 May.

The selection of free comics this year ranges from Dark Horse to Archie to Strawberry Shortcake to Titan’s Assassins Creed to Love and Rockets. Something for all tastes.

To see what you might be missing check out last year’s pictures.

Meanwhile back at the library our comic book collection grows apace. We have comic books about Men who dress as Bats, Women as Cats, Green Men, muscly men, and animals that talk, Bart Simpson and Adventures, Mysteries, Funnies, Scareys, the lot. I was delighted to see Scrooge McDuck, nephew Donald and the Beagle Boys make a comeback in hard cover. Made me quite nostalgic for my young reading self.

So we’ve made it through Day One of possibly the most unusual convention that Christchurch sees each year.  For those who don’t know, Armageddon is a yearly sci-fi/ fantasy/ comic /anime /manga /gamer /f an-based event that runs in two or three cities around New Zealand.  It’s a chance to dress up (or cosplay), to see tv and movie stars, watch anime on a big screen, buy really cool stuff, beat people up with giant inflatable sticks, or just hang out and talk nerdy.  There are teenagers EVERYwhere, and I am very jealous.  They get to wear cat ears, bear suits, capes, wigs and wings, while us grown-ups have to make do with buying steampunk jewellery and talking to internationally famous authors.

Robert Rankin is here, promoting his latest book Retromancer, and happily having his photo taken with librarians.  We talk about kiwi book events, and he says he is astonished and appalled at book prices here.  No wonder we don’t buy his books in the shops here, he says – he wouldn’t either, at more than $40 for a paperback.  He is charming, and witty, and we rush off to the library to get a FREE copy of one of his books to take home.

We also stop by the main stage to hear Paul McGann talk about Doctor Who, Hornblower, Withnail and I, Aliens and dozens of other movies and shows he’s been in.  The level of fan love is scary, but also kind of inspiring.

There are signing tables with voice actors from Naruto, X-Men and Dragonball Z, comic artists Christian Gossett, Michael Allred and Francis Manapul, and, mesmerisingly, a large wrestling ring with mostly naked men leaping around and yelling a lot.

Best costume of the day:  my pick is L from Death Note, just because he really does look just like him.  Most classic moment:  a fan asks Paul McGann to sing the Doctor Who theme tune, AND HE DOES.

Day Two brings the cosplay competition, panels with Star Trek and Heroes stars, an Easter Egg Hunt and a giant pillow fight.   And possibly some more of that steampunk jewellery …