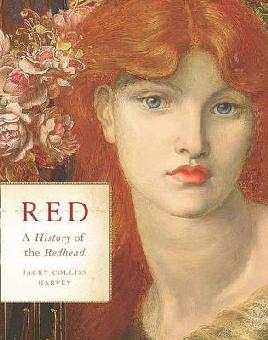 Life dealt me the recessive gene MC1R (only achievable through both sides of the family) and I arrived with a ‘reddish’ hue to my hair – together with the obligatory pale skin and, a few years later, a mass of freckles.  I managed to avoid the ‘Tudor’ blue eyes so I actually have discernible eyebrows.  Phew…

When I found this book on the shelf recently it screamed ‘Read Me, Read Me’.  So I did.

What a revelation!  Little did I know about my heritage and what different cultures felt about my red/auburn/ginger ancestors and modern-day counterparts.

Stereotypes of redheaded women range from the fun-loving scatterbrain to the fiery-tempered vixen or the penitent prostitute. Red-haired men are often associated with either the savage barbarian or the redheaded clown.

I’ve never been a great fan of ‘stereotyping’ and especially not of this negative variety.  My only negativity was related to the pitfalls endured on summer holidays where I always ended up swimming in more clothes than I normally wore, in addition to ‘slip, slap & slopping’ in a frenzy and still missing bits that needed TLC in the evening by use of cotton wool balls and calamine lotion. All this angst whilst my so-called friends gambolled and frolicked in the surf like slippery little seals and acquired golden overtones by the minute!

Anne Shirley in Anne of Green Gables was one of my childhood heroines (for obvious reasons) and when she finally walloped Gilbert Blythe for pulling her pigtail and teasing her mercilessly – OK so she might have been fiery but he certainly had it coming!!

Maureen O’Hara was famous for her fiery nature and red hair in the films but she always had to endure John Wayne – so who wouldn’t want to vent their spleen!  Can you see where I am going with this – provocation.  Tease a blonde, brunette and any other hair colour under the sun and you would get the same result.

Dwelling in the past isn’t good for you so I quickly read on and sure enough, there were also positives such as redheads being considered the darlings of the Renaissance period.  Acclaimed artists such as Degas, Titian and Rossetti couldn’t do without their favourite ‘red-haired’ muses – the first one of note and possibly the first supermodel of her time being Elizabeth Siddal.

I was unaware that many differing cultures to mine (Northern Hemisphere Celt) such as Russian, Italian, Chinese and even some Pacific Islanders also have the recessive gene that sits on Chromosone 16.

But true amazement came in the form of googling – apparently there is Calendar of Redhead Events, Ginger Pride Rallies all over the world and Melbourne has been voted as Host City for the 2017 Ginger Pride Rally which is being held on 29 April – the event raising funds and awareness for, both children’s anti-bullying and skin cancer non-for-profits.

You know it’s a bad day when you stumble myopically to the bathroom, ‘cos you can’t find your glasses without the aid of glasses; open the bathroom cabinet and spray your luxuriant locks with anti-perspirant and only realise your mistake when you locate aforementioned specs and can see that you are about to apply the hairspray where it will just prove ineffectual!

If you’re an optimist I suppose you would simply remark: “Well, if it gets really hot today I’ve taken appropriate action to avoid head sweat.”  If, on the other hand, you are me then you step wearily into the shower to try and rectify the damage.

Washed and blow-dried to the best of your limited capabilities, your ‘crowning glory’ is no longer glorious…  It’s at this point you decide that a radical restyle is in order; but how to achieve it?…

The answer lies with your library card and password / PIN.  Simply search in the catalogue for hairstyles and – voilà –  books and magazines galore devoted to the subject that are the answer to a distressed maiden’s prayer.  The 1920s, 1930s, 1940s, 1950s Look, Big Hair, Curly Hair, Long Hair, Short Hair, Fantasy, Dreadlocks, Braids, Buns, Twists, Marcelle Waves, Beading and Bows are there for the taking.  And for those who are stunningly reckless there is always the ‘cut’.

So, to all those ladies (and gents!) out there stressing about their tresses, remember, the research can be done via your local Library.

Christchurch City Libraries may just have the solution for you.

Check out our many books, e-books, dvds and magazines on do-it-yourself:

These are just a small sample of the many resources we have on our shelves. So, how about giving it a go? It’s inexpensive and very rewarding. Be adventurous – try something new and do it for you!

As a self-proclaimed fashionista (is there any other kind?) it was with some interest that I pounced upon a new biographical offering on one of the first ladies of New Zealand fashion, WORLD powerhouse, Denise L’Estrange-Corbet, namely All that glitters.  However, rather than diving straight into the book to find out more about the “outrageous, fascinating and impish” doyenne I found myself quite taken aback by the cover photograph which features the impish one looking decidedly grey of hair.  One of L’Estrange-Corbet’s signatures, other than her bright red lipstick is the sleek black bob that she usually sports and taking into account her high-flying fashion designer lifestyle the obvious lack of colouring on her head came as a bit of a shock.

It was then that I remembered an article that I’d read some time back about a movement among “ladies of a certain age” to eschew hair-dyeing in favour of a more “authentic”, age-appropriate look (they’ve even got their own graygirls website)  So the question is, which one of the following books has Denise been reading, and as something of a trendsetter will fashionable ladies everywhere be following suit?

Oh, and I think the gray looks fabulous on her, in fact I can’t wait until the bob turns completely white.  She’ll be quite striking! And do check out All that glitters – she has had a fascinating life, dahlings.