Shakespeare with tentacles, teenage sex, dead bodies galore, and nerf guns. Yup, you heard right. Hamlet: The Video Game (The Stage Show) is on now at The Court Theatre until June 24, and it is nothing like the Shakespeare you learnt at school.

Kathleen Burns is one of the cast, and we had a chance to ask her some questions about Hamlet, gaming, and this show.

Shakespeare! Guns! Gaming! Kicking ass! Hamlet: The Video Game (The Stage Show) at The Court Theatre sounds awesome! Thanks for chatting to us about it – it sounds like a really interesting mix of everything.

Before we start, let’s play ‘Two truths, one lie’ to get to know you. What are two interesting facts about yourself? And what about one thing that’s not true? We’ll see if we can guess which one’s the lie.*

1: I am really good at saying the alphabet backwards super fast.

2: When I was a girl, I had webbed fingers and had to get them surgically un-webbed.

That first one’s an impressive skill – I hope you’ve found some way to get that into one of your shows! Now that’s out the way, on to the important stuff. Old Will Shakespeare. We had to study one of his plays each year at high school. I think I just about died of boredom watching every girl in my class act out Romeo’s death in a Yr 11 English assessment – do you know just how long a 16-year-old can drag out a death scene?! It was painful!

What about you? Did you have to suffer through the plays in English class or did you actually enjoy learning about the Bard?

At first it was totally daunting… like… what are all these people on about…? But, I had good English teachers who broke it down. It’s actually super easy… this person wants to kill that person, this person wants to sleep with that person… Also I often got asked to read it out loud, and you know… any chance to be centre of attention haha!

What about now? Have your thoughts on him changed, or do you still feel the same way?

The older I get, the more I either love or hate it. Like… “Yay! Titus Andronicus is so cool! Let’s put people in pies!” or “OH EM GEE Hamlet is so annoying, I wish he would just make up his mind…” 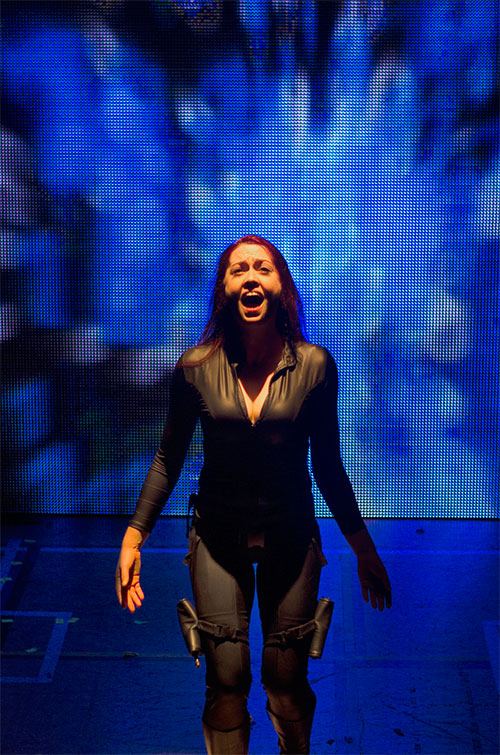 So … Hamlet: The Video Game (The Stage Show). That’s quite a mouthful! I looked it up on The Court’s website, and the description for the show was:

“Rebooting the story of Hamlet as a video game, this show blends Shakespeare with modern gaming culture to create a uniquely entertaining live experience. You’ve never seen the Bard this bad-ass!”

What does that actually mean? Most people would say video games and 17th century plays don’t really go together. What exactly are we going to see when we go see Hamlet: The Video Game?

Are you kidding me? Shakespeare and video games are pretty much the same thing. Bloodthirsty violence, revenge, high body count, teenage sex… all of the fun stuff. In this show you can expect to see an epic nerf gun battle, an abundance of gaming jokes, and hearts torn out of chests both literally and figuratively.

So it’s not going to be an old guy standing alone on a dark stage talking to a skull in Ye Olde English that we’re not going to understand? Phew!

Hamlet: The Video Game (The Stage Show) got shown for the first time back in 2015. It obviously did well to come back for a second go, so who is the show *actually* for? Usually people who go and see plays are not the people who’ll spend time playing computer games, so where did the decision to merge classical theatre and gaming come from? And who’s the target audience?

The idea came about from Simon Peacock, who started as a court jester here in Christchurch but now works in the video game industry in Canada. He directed the voices on one of my favourite games: Assassins Creed! This show is totally for gamers. I mean yeah, Shakespeare lovers are loving it too… but it so so packed full of jokes for gamers.

In video games, the gamer is in charge of choosing what their avatar is going to do next, or where they’re going to go, and that happens in this show too, right? So it’s kind of like a choose-your-own-adventure version of Hamlet! That’s pretty cool.

Hahahaha no. It’s not a pick-a-path. Any experienced gamer will tell you that video games only offer the illusion of choice. At its heart, it’s the story of Shakespeare’s Hamlet. But with video game tropes over top, like, at the start, the audience get to customize their Hamlet character. So far the mohawk has been really popular. But can you please come along and choose the beret for once??? It looks kick ass and the audience hasn’t chosen that one yet!

Got it. Always choose the beret.

Back in the day, girls and women weren’t allowed to act in old Will’s plays – apparently boys and men did a better job of playing the female characters than actual females did. That’s pretty dumb, I reckon, but I guess that was just the way society was back then. There’s a real live female actor in this show though, right? Playing a real live female character? Does she get to do really cool stuff, or is she stuck at home doing embroidery and cooking and looking after the kids? Of course, if a female wants to stay in and do sewing, she totally can – you be you, girl, and do what makes you happy! Anyways – what are the girls up to in Hamlet?

Well actually it’s funny you mention that because…. I am totally a girl. Yip. Boobs and everything. And I’m a gamer too. (Pause for shocked silence) The most domestic thing any of the female characters get up to in this is when Gertrude in her bed chamber brushing her tentacles. Yip, that’s right, her mighty tentacles that come out of her head. When she’s not doing that, she’s kicking ass. 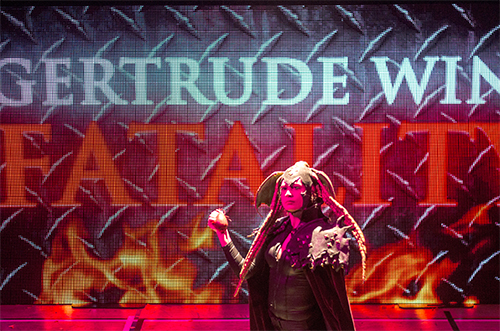 Shakespeare and the tentacles. Not a sentence I thought I’d be writing, but there it goes.

Lots of schools use Hamlet as one of their English texts. How close is this play to the actual Hamlet play? If I go see it will I be able to write about it in my NCEA exams?

It would actually totally help you to understand the basic story of Hamlet… I wish I had something like this when I was in high school!

All right, so you must have thought about this – if Hamlet actually got released as a video game, who would you choose to voice the characters? And why?

I will voice them all. With a million different hilarious voices. And maybe some voice changing technology to make my voice sound deep and evil for Claudius.

Right … you did say you wanted to be centre of attention at school. I guess some things don’t change.

How many of the folks involved in this show are actually gamers? And what’s the fave game at the moment? Although I bet they’re all pretty busy at the moment making sure this is  finished and ready for the audience.

All of us are either current gamers, or have been at some point in our lives. Personally, I’m looking forward to playing Andromeda because I’m a huge Mass Effect fan!

So… Hamlet: The Video Game (The Stage Show) is at The Court Theatre until June 24. It sounds like it’s going to be an amazing show to watch and should have something for everyone.

We’ve opened already! Only a week and a half left, so get in quick!

Thanks for chatting with us, Kathleen – have you got any last words for people out there trying to decide if this show’s for them?

It’s for you. If you come to the show, and then are like “maybe that wasn’t for me”, I will personally come into the foyer and admit to your face that I was wrong. (THIS HAS NEVER HAPPENED)

So there you have it, folks – Hamlet: The Video Game (The Stage Show) is for everyone. If you love Shakespeare but don’t game, or play video games but aren’t a fan of the Bard, or love Shakespeare AND gaming, go see it – it’s only $26, and it’s Shakespeare and tentacles. What’s not to love?!

Images supplied by the Court Theatre.