Mary Shelley was just 18 years old when she began writing the English language’s most successful gothic horror tale, Frankenstein, which was first published  200 years ago. So after all these years what do we know about her, the story, and the circumstances that led to the creation of Frank Jnr.?

The story of Frankenstein is now so embedded into our popular culture that there have been countless depictions and references all through the history of film and television; think Hermann Munster, the film Young Frankenstein, British tele series The Frankenstein Chronicles, and even with the fantastic kids film Tim Burton, Frankenweenie ,we see that this story of horror has even entered into the realms of children’s literature and culture.

But have we stayed true to Mary’s idea?? Does the monster still serve the same purpose as she intended; a lesson in mortality, human desire for control and intolerance for the different, perhaps even describing the perils of parental abandonment…? This series of charts from the Guardian suggests there have been some major deviations.

So how will you celebrate the outstanding achievement of Mary Shelley? Perhaps by reading some classic gothic/horror/monster literature, there’s plenty out there and I’ve created a short list of titles for you, all available through the Christchurch City Libraries catalogue and across many formats; books, audiobooks, ebooks, and graphic novels…

Happy and spooky reading to you….

In June 1816 a young woman awoke from a terrifying nightmare. Later, she would recount the vision which had left her so unsettled.

“I saw the pale student of unhallowed arts kneeling beside the thing he had put together. I saw the hideous phantasm of a man stretched out, and then, at the working of some powerful engine, show signs of life, and stir with an uneasy, half-vital motion.”

What was the source of this night terror?

In the days prior, she, and a group of other English expatriates had spent their evenings gathered around the fireplace of Villa Diodati on the shores of Lake Geneva, Switzerland. Climatic changes, brought about by the eruption of Mount Tambora in Sumbawa, Indonesia, on April 10-11 1815, had left the world experiencing what later came to be termed ‘The Year Without Summer’. Temperatures plummeted and terrifying lightning storms raged across Europe. Forced to stay indoors, they read Das Gespensterbuch (German ghost stories which had been published in French in 1812 under the title Fantasmagoriana). Naturally, this gloomy atmosphere soon led to further discussions about ghosts, vampires, and the theories of reanimating the dead.

Such was the impression that the nightmare had on the young woman, that she soon took pen to paper, turning it into a tale of her own. In doing so she was joining a Gothic literature tradition started by earlier novelists, including Eliza Parsons (1739-1811), Regina Maria Roche (1764-1845) and Ann Radcliffe (1764-1823).

When it was published in 1818, under the title Frankenstein; or, The Modern Prometheus, its author remained anonymous. Only later would the reading public learn that it had in fact been written by a woman.

Her name was Mary Shelley.

Born 30 August 1797, Mary Wollstonecraft Godwin was the daughter of two intellectuals. Her father, William Godwin (1756-1836) was a writer and philosopher. Her mother, Mary Wollstonecraft (1759-1797) also a writer and philosopher, was a proponent of women’s rights who, in 1792, wrote A Vindication of the Rights of Woman: with Strictures on Political and Moral Subjects. Unfortunately, Mary Wollstonecraft died soon after giving birth, but her ideas would be inherited by her daughter who would often read her works during visits to her grave. From her father, Mary learned of the latest scientific endeavours. These included the experiments of Italian physician Luigi Galvani (1737-1798) who exposed the limbs of dead frogs to electricity in order to observe the movements, and his nephew, Giovanni Aldini (1762-1834) who built upon his uncle’s work by running electrical currents through the heads and bodies of executed criminals, causing their limbs to twitch and their mouths to open.

In 1814 Mary met the Romantic poet, Percy Bysshe Shelley (1792-1822), at her father’s house. Although he was already married, the two formed a relationship and in July of that year they eloped to Europe. Accompanied by Mary’s stepsister, Claire Clairmont, they roamed through France before eventually arriving in Switzerland. Unable to survive on Shelley’s meagre savings, they eventually decided to return to England, via the Rhine River. In doing so they passed through a landscape of castles set atop prominent cliffs and hilltops, some of them in a ruined state. One such ruin they may have learned of, during a brief stopover in Mannheim, was the nearby Burg Frankenstein which was associated with alchemist and theologian, Johann Conrad Dippel (1673-1734) whose mysterious experiments had earned him a sinister reputation.

Upon returning to England, the couple continued to live together. Mary later gave birth to a daughter on February 22 1815. Unfortunately the child died, leaving Mary to confess in her journal that she wished for a way to restore life to the deceased. In January 1816, she gave birth again, this time to a son.

The creation of the monster

By 1816 Percy Shelley’s health was deteriorating and his unpaid debts were increasing. In May they left England returning to Switzerland, where they joined another Romantic poet, Lord George Byron (1788-1824) and his physician companion, John William Polidori (1795-1821) on the shores of Lake Geneva.

On June 15, as a storm continued to rage outside Villa Diodati, the group decided to hold a ghost story competition. A few days later, Mary would soon find inspiration for her own story in the nightmare of a scientist reanimating a lifeless corpse. Although Frankenstein contained elements traditionally found in Gothic novels (ruined castles, dark forests, storms), it departed from the standard Gothic novel of the time in that, rather than dealing with the supernatural, its horrific features had their origins in science.

The success of Frankenstein allowed Mary Shelley to embark on a career as a novelist at a time when writing was still considered a masculine domain. She would proceed to write further titles, including the post-Apocalypitc novel, The Last Man (1826), before her death in 1851.

On 16 June 1816, trapped inside a villa by insatiable thunderstorms erupting across Lake Geneva in Switzerland, Lord Byron challenged his party of young bohemians to a ghost story competition.

That night, Byron’s challenge gave birth to Mary Shelley’s Frankenstein, and Polidori’s The Vampyre, the first great vampire novel. Combining drama and a stellar cast of popular writers, including Neil Gaiman and Margaret Atwood, this documentary explores one of the most significant moments in gothic history and its lasting effect on modern literature.

View the video Frankenstein and the Vampyre: A Dark and Stormy Night. 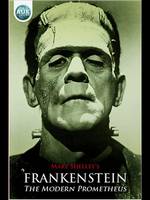 I’m one of the legion of fans who has been eagerly awaiting the third installment of Dean Koontz’s reinvention of the Frankenstein story and I’m glad to say it has finally been published.  We just received our copies at the library last week and mine is sitting by my bed on the top of my reading pile.

There has been plenty of talk on the Internet about the third installment, called Dead and Alive, and there were plenty of rumours about what had happened to the book.  From what I read, Koontz’s official explanation was that it was due to be released in 2005, but because the books are set in New Orleans and Hurricane Katrina hit, virtually wiping out the city, he felt that it wasn’t right to release Frankenstein’s monster as well.  Therefore the book was delayed and rewritten and we can now read the final installment.  If anybody has already read it,  I’d love to hear what you thought.  I have a feeling I may need to reread the first two books to refresh my memory.