Kaveh Akbar is more of a shepherd than a wolf. The internationally acclaimed Iranian-American poet not only produces amazing thought-provoking poetry, but nurtures other poets to achieve their full potential too. So it was a perfect date for us to be hosting him at Tūranga, the flagship of the future. We are all about helping our citizens to access all they need to reach for the top.

Hosted by local poet Erik Kennedy, this event was held in the brand spanking new Tautoru / TSB Space, and brought to us by WORD Christchurch in association with LitCrawl Wellington. View photos of Kaveh Akbar and Erik Kennedy event.

Mr Akbar is a really nice guy. Humble and quietly spoken (though this changes when he reads) Kaveh kept thanking us for coming. When reading, Kaveh is animated, moving with the lilting rhythm of his words, his voice rising with the swell of emotion and experience.

An Iranian-American, he sees his poetry as:

“the membrane between myself and the divine…a new idiom for ancient binaries.”

Binaries such as solitude and community, decay and rebirth, literature and culture.

Kaveh has been posting interviews with poets making waves on DiveDapper; a website he created as a platform for exposure, promotion and connection. It has become a community, bringing poets and enthusiasts together worldwide. The list of poets on this website is impressive! Akbar sees this as a way to “push (his gratitude) outwards.” He further demonstrated this by reading two poems by New Zealand poet Helen Heath. 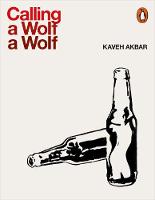 Kaveh’s book of poetry Calling a Wolf a Wolf was released to much acclaim this year. In it, Kaveh addresses difficult themes from addiction to desire; his poetry refreshing in a way that feels uplifting rather than downbeat.

Akbar’s work shares a sense of lessons learned and experience shared, as opposed to a self-indulgent train wreck. In all, there is a theme of hunger: for the physical sensation of being alive. Akbar’s poems grabbed me at first taste. Alliteration, onomatopoeia and themes of life, death and longing fill his poems. Addiction is portrayed as a kind of death; “a void to fill in wellness”. The poetry came from a need to fill the gap left after he became sober: “my entire life up to that point was predicated on the pursuit of this or that narcotic experience.” All this brings to mind a Persian poet who celebrated the wine and song of life, yet without the cautionary tale: Omar Khayyam.

In the light of current politics, Kaveh asserts that the ‘utility’ of poetry ‘forces us to slow down our metabolism of language’. A useful antidote to doublespeak, perhaps. He makes it sound like a science. And in fact it is.

Although he now only speaks a few words of Farsi these days, Akbar sees feeling as a ‘universal language,’ one that we all understand. The purpose of poetry, he says, is as Homer put it – to ‘delight and instruct.’  So often, we leave out the delight, loving to lecture others on the way of things. Pre-sobriety, Akbar the poet painted himself as the hero of his works; a ‘gloriously misunderstood scumbag.’ A way of being, he says, that’s insufferable (I’ve dated guys like that).

‘So you’re the sobriquet of the School of Delight?’ quips Eric Kennedy. Sobriquet. Oh clever. Thus begins a new Golden Age in Poetry. The interview website DiveDapper came from Kaveh’s hunger for dialogue with other poets while going through recovery. It’s a way to share experience with others – ‘a vast expanse of empathetic resources.’

The internet has meant that ‘the age of coy diminishment of one’s passions is over’…it is now an age of ‘unabashed zeal.’ Eric:  Zeal Land!”

Kaveh read a number of wonderful poems from Calling a Wolf a Wolf. I love the titles – so real but imaginative. He really does have a way with words:

“Poetry is the best thing that exists in the universe.”

Kaveh has been published by the New Yorker, The New York Times, Best American Poetry 2018 and The Guardian:

What you really want from a session called “You write funny!” is for there to be writers and for them to be humorous. It’s pretty much right there in the title. You’re expecting to laugh a bit. And certainly this Friday night session at WORD Christcchurch Festival 2018 MCed by the affable Ray Shipley filled the bill.

The laughing, however, was expedited by Shipley’s careful, “kindly primary school teacher” style coaching, leading the audience through some “little titters” to start with, and eventually even, some good, old-fashioned cackling. “All laughs,” we were told “are valid and important“.

So that was a good place to start from.

The line-up of reading authors was largely unfamiliar to me but the feelings of amusement and genuine laughter (did the coaching and practice beforehand make for a better quality of chuckle?) weren’t. This is what funny sounds like.

First up was Erik Kennedy (author of poetry collection There’s No Place Like the Internet in Springtime) who read three poems all with a wry serve of humour, “You cannot teach creative writing”, “Get a pet with a longer live span than humans have”, and in between, a strange take on Christmas heavily influenced by the content of spam emails. I can’t really explain this poem except to say that it was simultaneously more AND less weird than it sounds.

Megan Dunn read excerpts from her book Tinderbox, about her time working at a Borders bookstore. Much of the time Dunn read with a sly, knowing smirk on her face… that was fully justified. Her tales of retail reminded me more than a little of my experiences working in libraries as well as the self-confessional style of David Sedaris, in particular the essay Santaland Diaries about his time working as a Christmas elf at Macy’s Department store.

It eventuates that I find both David Sedaris and Megan Dunn hilarious.

Dunn was followed by poet Chris Tse (author of poetry collection He’s so MASC) and his poem, Wasted, was a hit with the audience. Wasted is a treatise on the sort of men who don’t get drinks thrown in their faces nearly as often as they deserve. Though he admits there are few workable alternatives,

Only a monster would throw a bowl of chips in this economy.

Lastly Annaleese Jochems took the stage reading, from her book Baby, an exquisitely awkward scene of backyard fitness instruction that made me feel more squirmy than amused, but many people in the audience let loose their best cackles in response, so I might have been alone in that.

All in all, You write funny! gave my laughing muscles a good, solid workout.