Earlier this year we were told by our vendor Newspaper Direct that PressDisplay would be changing. Due to its popularity and the number of complaints we receive if there is even a small upset with this eResource we were all a bit terrified! The main market for PressDisplay though is not libraries but individual subscribers and business people who all require it to have a more mobile friendly interface which now sees the introduction of PressReader. Which thankfully has introduced a series of improvements.

PressReader still contains same day access to more than 2,000 newspapers and 500 magazines including The Press, The Listener and the New Zealand Women’s Weekly. The way these are displayed though is different and I encourage everyone to have a play with the new look. To fully enjoy all the benefits of PressReader – including the ability to customise what you see –  it is recommended that you set up your own account using your email address and a password.

You can also get 10 newspapers or magazines a day on your phone or tablet by downloading the PressReader app to read online or offline so you will never be short of reading material. 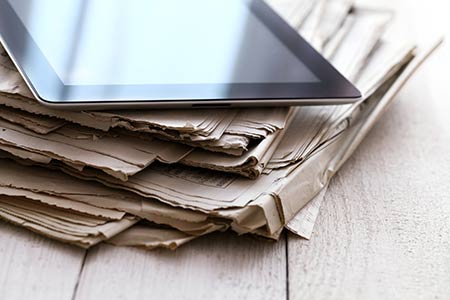 There can be no denying how popular PressDisplay is. Over 19,000 newspapers were read in June alone and if there is ever a delay from PressDisplay (based in Vancouver) in getting the latest edition of The Press up then the phones here at the library run hot with angst.

Like all things technical upgrades are necessary to keep pace with the environment around them. PressDisplay is no different and in the coming months will shed its old interface like a caterpillar sheds its cocoon to evolve into a butterfly or in this case PressReader. There will still be unlimited access to newspapers and magazines from around the World but PressReader will be much more mobile friendly and provide access to features like instant translation and social sharing.

You can even set up your own account and customize what you want to see when you first open it. Personally I have the local newspaper the Press set up as a favourite as well as the Southland Times and the magazine Healthy Food Guide. You also get to download publications for later reading online or offline so you will never be stuck for quality reading material again.

At the moment when entering PressDisplay you will have the option to either try PressReader or PressDisplay. Feel free to use this time to investigate the changes to come or even set up your own account. The permanent swap over from PressDisplay to PressReader will happen on the 30th of August.

You can also get a look at PressReader here

Online newspapers are popular at the library and come in a variety of forms. There is the instant appeal of today’s news with PressDisplay or there are newspaper archives, such as our latest arrival to eResources – The Independent Digital Archive 1986-2012.

We have a number of these newspaper archives. Our customers like their historical, genealogical, political and social coverage. So why add The Independent? As per per its name, it aims to be a broadly centrist publication. It offers an alternative voice to the centre-right and right-wing views of The Times and the Daily Mail which we also provide access to. With no affiliations to any major political party or corporation it has taken some controversial stands including opposing the 2003 Iraq war and criticising the UK and US governments policies in regards to the War on Terror.

In short, it offers balance to the collection we already have. You can cross search this newspaper with numerous others using Gale NewsVault to help formulate your own balanced opinion or just browse through its issues and contemplate the fashion, gossip and news of the day. If it is news you are after – from today’s headlines or the headlines of 400 years ago we have online newspapers for you! 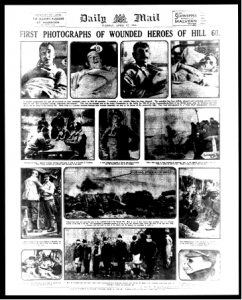 Described by the New Yorker as “the newspaper that rules Britain”, the Daily Mail has been at the heart of British journalism since 1896. Nowhere is this more obvious than during the First World War. Before the start of the war the editor, Lord Northcliffe campaigned for German power to be curtailed and predicted war. His influence on public opinion was so strong that it was believed that a German war ship was sent to shell his country home in Kent in an attempt to assassinate him – shells did fall near his house.

Once the First World War had commenced, Northcliffe wrote an article criticising the national hero Lord Kitchener for ordering the wrong sort of shells for trench warfare. Northcliffe’s wartime criticism would see copies of the Daily Mail burnt on the floor of the London Stock exchange. In time though his criticism proved correct and pressure from the revelations would see the resignation of the then Prime Minister H. H. Asquith (The actress Helena Bonham Carter’s Great-Grandfather) and the appointment of a new PM, David Lloyd George. The Germans acknowledged Northcliffe’s part in their downfall by striking a bronze ‘hate medal’ of him.

You can read the thoughts, motivations and feelings of all those involved in this heartbreaking time period using  The Daily Mail Historical Archive 1896-2004.  All you need is your library card number and password/PIN

This may be one of our lesser known eResources, but for an understanding on the build-up and reaction to the First World War at ground level, then it remains a gem. 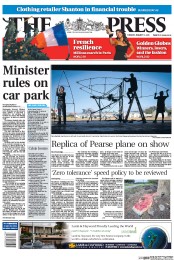 One of our most popular electronic resources PressDisplay has been a victim of its own success for some time now. In the morning between 7am and 9am people were getting turned away from the site as it was simply too busy. Apparently lots of you like to read the Press over your Weetbix in the morning and it was overloading the system!

Luckily we have been granted a wonderful New Year’s gift with unlimited access now available to PressDisplay. No more turnaways, no more disappointments – just online newsy happiness to be had by all! Well, as much happiness that the news can ever bring …

Prince Charles has created a storm by being heard to draw comparisons between Putin and Hitler. Certainly Hitler started by annexing  a few territories whom Germany had historical links to, much like Putin did with Crimea. The question Prince Charles asks is will Putin stop there, because Hitler didn’t.

Tim Finn may tell himself history never repeats before he goes to sleep, but many others would disagree and say history is cyclic. If you are a bit of a history buff, then we have so many great online resources for you to help form your own opinions. Here are a few:

For even more historical resources check out the Source. All you need to a gateway of information and glorious interactivity is your library card number and password/PIN.

There is only one newspaper in the world that can claim to have helped bring down a British government and also been sued by Elton John. Love it or hate it the British newspaper the Daily Mail is loved and loathed in equal proportions. Catering to readers who want entertainment from their newspaper as well as coverage of important news events, the Daily Mail has criticized everyone from Lord Kitchener in 1916 for not properly supplying British troops to Kim Kardashian and her baby weight.

Its founder Lord Northcliffe identified a gap in the market for a paper that delivered the three things that are always news – health, sex and money. By offering short engaging stories with pictures, the news for the first time reached into the homes of millions, many of whom had never bought a newspaper before.

We now have access to the Daily Mail Historical Archive 1896-2004 with more than 100 years of this major UK national newspaper in fully searchable digital format, with all the  advertisements (including family notices), news stories and images that capture 20th century culture, society and tastes. Love it or hate it, it is a wonderful snapshot of ourselves at our best and worst. You can cross search this newspaper with several other major historical newspapers at NewsVault or search it individually from home or in a local library at the Source or in the catalogue. Have a gander today!

One of the perks of my job is I get to explore the limitless charm of our collection of historical newspapers including the British Newspaper Archive which brought this to my attention….

According to the Evening Telegraph on June the 17th 1901 it was reported in the ladies column that it is  “Quite the latest idea to have a Face-Book“! Maybe Mark Zuckerberg isn’t so clever after all? Without the benefits of online technology in 1901, the ladies were encouraged on visits to friends to draw their face or the face of someone else in the lady of the house’s sketchbook and to put their name underneath it. This gave the lady of the house her very own “Facebook” which one could chortle over the teacups while viewing the varying drawing skills of their friends.

I don’t know about you but I think this idea is perfectly charming – despite my illustrating abilities rarely progressing past stick men. At the end of the day the ladies of the Evening Telegraph have at least come together for a laugh and aren’t discussing their woes by abbreviated texts. Oh for simpler days? Maybe. I sure would missed those funny cat videos though!

cture Post was an iconic British newspaper published from 1938-1957. At its peak 80% of the British public were reading it. Why? Well, a large part of this was its pioneering use of photojournalism. No longer were pictures just portraits of the great and good,  but they reflected the stories of those on the street in all their joys and worries. There was a lot to worry about with this newspaper covering the stormy years leading up to World War II to the first decade of the Cold War.

It is positively fascinating to see the prevailing attitudes and the discussions of everyday Britain in this time period. The Picture Post  Archive contains fully searchable reproductions of every issue of this newspaper for you to explore.

This archive is a goldmine for historians or anyone with an inch of curiosity in their bones. You can access this from home or at any community library with your  library card and password / PIN. I encourage you to have a read and fall into a world preparing for and enduring war and facing the nuclear age with bravery and humour.

My great, great grandfather left Galway, Ireland with his parents and siblings on a boat to travel to New Zealand to start a new life. I can only wonder what would push people to undertake a voyage of months with so many unknowns.

That is what can sometimes lack in family history. You need the stories not just dates. This is where the British Newspaper Archive can help. It contains digitized searchable historical newspapers which cover every aspect of local, regional and national news in the United Kingdom and Ireland from the 18th and 19th century. Newspapers let us hear what it was really like from those who were living through it at the time.

Many of these newspapers have never appeared online before. Until now you would have had to visit the British Library to see them. Access to this product is free but available only in libraries. You will also need to enter your email and a password. This allows you to save your searches, bookmark articles and see you own search history. Basically you can start off where you left off next time you visit.

Take some time to explore your family story with this and our many other family history resources.