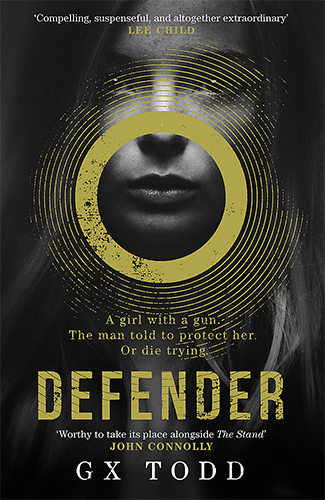 Defender is set in a dystopian future where most humans have succumbed to a disease that makes people crazy – hearing voices that tell them to kill others and then themselves.

In the first book of a four-part Voices series, Defender sets the scene as protagonists Lacey – young, cheeky but calculating and Pilgrim – tough on the outside but with a seriously soft heart – meet for the first time.

In Defender, Todd sets up the relationship of Lacey and Pilgrim, who she only knows as “Boy Scout.” Pilgrim’s character is world weary. He reminds me of Bruce Willis. Perhaps this is because he was The Last Boy Scout but I’m already imagining the movie.

Lacey is desperate to find people. But not so desperate that she doesn’t use her wits. Or the shotgun she’s very competent with.

Not at all stupid, Lacey is a young woman to be reckoned with. Pilgrim would do well to listen to her instincts. She soon finds that the escape and community she had hoped for will not be easily won: not all survivors want community; many want power.

Pilgrim dispatches these human predators with expertise. Pilgrim just keeps moving. Wary, he keeps to himself. He relies on his wits, avoiding others who could slow him down or worse.  He hasn’t counted on picking up two women and a cat in the first few chapters.

He keeps the Voice in his head to himself as well.

Over a glass of lemonade Lacey cleverly tricks Pilgrim into taking her away from the home town she’s been stuck in for seven years.

Some of the content in this book is brutal: it’s a brutal world – yet Todd conveys characters’ suffering with sympathy; the brutality is integral to the plot. Yet there is a layer of female self-awareness in the text. GX Todd writes with feeling without being sentimental. She writes with a mastery of language: her physical, descriptive passages are so well written that they aren’t flowery or wordy, but give the reader a clear perception of events:

(Pilgrim) eased lower into the seat, his eyes heavy-lidded. “Get off the highway at the next off-ramp…and don’t stop for anybody.” He sank down, down into the seat’s foamy embrace, until he was encased on all sides, as if lying in a plush, slumberous coffin.” (p. 130)

Chapters alternate between the points of view of the two main characters, often replaying a scene from each character’s point of view. Until the lines become crossed…

This book brings to mind Stephen King’s The Stand ; a classic post apocalyptic battle of good vs evil. In this story there is also a man collecting people he deems special to master plan…

It Defender also makes me think of Bird Box – another great dystopian story in which most of the world have not only been driven murderously crazy, but also blind…

Dystopia : a community or society that is undesirable or frightening …

My first couple of reads for the year have been dystopian novels and this looks to be a growing trend in Young Adult fiction. Personally I love dystopian novels.  I love the imaginations of these authors who build a society that could easily exist in the not-too-distant future.  They take a small piece of today’s society, such as social networking or consumerism, and ask ‘what if this got totally out of control?’

In Rae Mariz’ debut novel The Unidentified, 15 year-old Katey (AKA Kid) goes to school in the Game, an alternative education system run by corporations.  These ‘Games’ have been set up in disused shopping malls, so where there used to be shops, there are different spaces that students can go to try new products and participate in activities to increase their ‘score.’

The students vie with each other to be noticed and sponsored (or ‘branded’) by the corporations, thereby giving them celebrity status and financial freedom.  Students each have iPad-like devices that they use to update their profile pages and live streams. When Kid witnesses a mock suicide staged by an anonymous group called the Unidentified, she begins to doubt the system. The story will strike a chord with teens and they’ll be able to really relate to Kid and the suffocating world she lives in.

If you’re a fan of  YA dystopian fiction there are plenty of titles to choose from.  Suzanne Collins’ Hunger Games Trilogy is the most obvious choice (and the most popular) but here are a few others I recommend:

There are five Young Adult titles shortlisted for the NZ Post Book Awards. Tonight I will be on a panel discussing them at the opening of the new Te Tai Tamariki premises in Victoria Street.  It seems trite to say the standard is very high, obviously they wouldn’t have been nominated if they weren’t excellent books! Suffice to say, after reading all five, I didn’t have a sense of one particular book as being a clear favourite for the top spot. Each one has its own star appeal. But I think it would be hard to overlook Mandy Hager’s The Crossing and Tanya Roxborogh’s Banquo’s Son for emotional punch.

The Crossing is described on the cover by Margaret Mahy as “1984 for teenagers”. Conceptually it is a brilliant dystopian sci-fi fantasy. The survivors of an ocean liner that has grounded on a tropical island during a world-wide plague outbreak have gradually enslaved the locals. They prey upon them for new slaves and their plague-free blood. It is an appalling vision of what a powerful elite can achieve when morality is thrown out the window. The hero, young Maryam, is the equivalent of Winston Smith – she gradually realises that being one of the privileged chosen is a two-edged sword. And she decides not to stay around to be slowly bled to death.

To be honest  I didn’t find the comparison to 1984 to be particularly relevant when trying to convey to someone else the emotional climate of the story. It is far more like The Handmaid’s Tale than Orwell’s great classic. And it does read like a winner – not surprisingly, because Mandy Hager has already won the LIANZA Esther Glen Award for fiction in 2008 for her novel Smashed.

Yesterday, I was privileged to hear Tanya Roxborogh speaking at Avonside Girls’ School about her novel Banquo’s Son. I had intended reading it anyway, but started unenthusiastically with the thought: I have to read five books by … so I had better get moving … My plan was to read a chapter or two, then switch to the Lee Child on my bedside table that constitutes my real reading pleasure. But I found pretty quickly that I didn’t want to put Banquo’s Son down. Like Tanya I had taught Macbeth for years in the classroom and always wondered how Banquo’s children got to be the rulers of Scotland, when the play ends with Malcolm and Donalbain (the dead king’s sons) firmly back in the running. Tanya explores the “what if” raised by the Scottish play and introduces us to a Fleance any mother would be proud to call her own.

She mentioned in her talk that the young man’s face on the cover is not the perfect Fleance she imagined in her dream of him. But I don’t think there were razor blades in medieval Scotland, let alone hot showers and deodorant. It’s a great cover image and it manages to convey the dark elements of the narrative. Although, not a tragedy – in the strictest sense, it is a tale full of sound and fury. Plenty of action for boys and a strong romantic thread for lovers of that genre. It is the first of a trilogy, the next is about to go to print.

So in conclusion, the world of YA literature in New Zealand has plenty to write home about. Although I wondered whether one of these two novels might be the eventual winner, the one that kept me up late on a Saturday night turning pages as quickly as I could, was End of the Alphabet by Fleur Beale. It is a deceptively simple tale of Ruby Yarrow, who decides one day after talking with her friend, that she is not going to be a doormat anymore. If you want to find out more, I recommend you get a copy … it’s not surprising that Fleur’s book is so readable because she is also a past LIANZA Esther Glen Award winner: Juno of Taris in 2009.

But of course, half the fun of literary competitions for readers is trying to guess the winner and I am sure you will have your views on who it should be. I am content to wait and see.