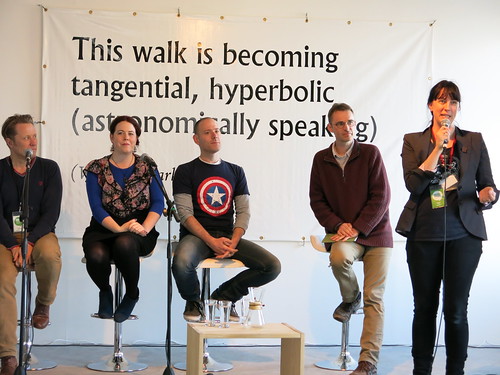 I can’t remember a time when I didn’t know I was going to write comics. When I would read Tintin, even the individual panels seemed like a little window I wanted to climb inside. Creating my own comics is a way to climb in that window.

Dylan Horrocks was born in 1966 and raised on a diet of Asterix, Tintin and Captain Marvel. He was part of the 80s zine revolution, photocopying his own comics at school and giving them away. Despite learning (to his surprise) that writing comics is not a high-paying profession, he moved to London with the intention of making his way in the European comics market. It was in London, pores full of smoke, that he began to write comics set in New Zealand.

Hicksville started off as a side project, emerging from the stories I was writing for Pickle. Eventually Pickle was swallowed into Hicksville and that became my main thing.

Given the option by his publisher to either finish off the Pickle series or bring out Hicksville as a graphic novel, Horrocks decided to publish Hicksville.

After working on something so carefully planned out (Cafe Underground), I wanted to do something I could just make up as I went along.

As someone who is fascinated by concepts such as Jasper Fforde’s Well of Lost Plots, writing ephemera and the mystery of unfinished drafts, I was excited to discover Horrocks is a fellow fan of the unpolished product (which I might have guessed from his recent title Incomplete Works). There’s just something alluring about the idea of what might-have-been:

versions, all the drafts and different endings the author gave up on.

It reminds me of an anecdote in The  Changeover session, where Karen Healey recounted the experience of re-reading her own work and discovering she’d accidentally created a time capsule of pre-quake Christchurch. Every written word is a moment captured in time. Sometimes it can be a thought that will ring just as true across several centuries, and sometimes it will be a mystery to be puzzled over by a future reader.

Sam Zabel and the Magic Pen

Titular Sam Zabel is in Christchurch for a conference when he is catapulted into a comic set on Mars. His adventures and attempts to make sense of himself make up the book soon to be published by Fantagraphics, and otherwise available on his website.

I just wanted to set up a situation that had plenty of potential for exploration. I wanted to ask: Does it matter ethically what we fantasise about? Do we bear a moral responsibility for our fantasies?

If you know the answer, please leave a comment and let me know!

I have a great view of the stage for this session – for one thing, the audience here is a lot shorter than previous ones; and I’ve also chosen to sit up the front – I am here to see Oliver Jeffers, critically acclaimed award winning author and illustrator of multiple bestselling picture books, and he’s going to be DRAWING. On stage.  Right in front of us.

New Zealand’s own award-winning graphic novel artist and author Dylan Horrocks introduces him. Oliver has chosen to tell us his bio using slides, and once again I have to make Choices – do I Write or do I Watch? Clearly I watch (and you can too, here, although we get to see some extra special bits here at the Festival that he’s added just for us). He talks his way through the slides, and as well as photos of him as a child, and some of his work, we also get to see lots of pictures of things people have sent him, from crocheted penguins, to crazy glasses, and frighteningly, an oversized, realistic model of a human heart. On a pedestal. The room is already full of Warm, and Happy, and by the end of what is, after all, just an introduction, we are all in love.  Everyone, including all the grownups, is wearing an identical goofy grin.

We are still wearing the grins an hour later as we leave. Thanks to an outstanding tagteam live drawing collaboration with Dylan, we now know