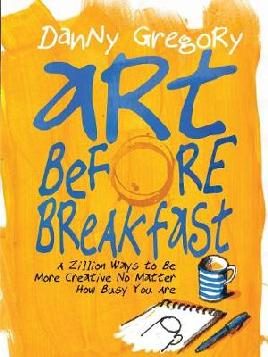 In any interaction where I mention that I try to draw every day, there is a point straight after the words leave my lips when I can hear the drawbridge being cranked up, and see the intervening moat filling up with tablets, apps, Pokemon and the sundry small, useless products of 3D printing. And, as if from a distant galaxy, I hear the person on the other side of the moat say some variation of the following: “Oh I can’t draw a thing. I can’t even draw a stick man.”

And let’s say, just for the moment, that you are stick-man challenged, still I bet you had the chance to draw and paint and play music when you were at school. What is a great concern for many educators nowadays is that the swing to a predominantly technology-based education system like STEM (Science, Technology, Engineering and Maths) means that many children will be deprived of the opportunity to develop their own direct, tactile creativity, and will be doomed to a life of thinking that creativity is the manipulation of someone else’s genius.

Which is why I am such a huge fan of The Big Draw – The world’s largest drawing festival. Most education systems nowadays focus on STEM curricula. The Big Draw is part of an initiative to change STEM to STEAM through the addition of the Arts. And we have a chance to be part of this initiative at Art Box Gallery in Christchurch until Friday 28th October. Art Box is the venue for the Christchurch Big Draw which has invited 20 New Zealand artists to show us just how important drawing is. How we simply cannot afford to let Art slip through the cracks. How the British Arts Education Trust believes  “Art can change lives”.

I went along to The Big Draw with my colleague and art-buddy, Masha. Debra McLeod was in attendance to share some arty gems with us – she is always so welcoming and knowledgeable. It was a struggle to drag Masha past Ina Johann’s Parallel Lines – mapping another life (and it was only exhibit 2 of 20), and I wanted my little drawing books to morph into the likes of Mario Luz’s Sketchbooks.

All the artists in this Big Draw exhibition are known in their field and for sure you will come away with a different slant on life. But here’s an idea – maybe the next Christchurch Big Draw could feature the sketchbooks of ordinary, everyday sketchers: the people who draw though they will never be known for it, and the children who are just starting out on drawing.

Back we meandered to Central Library Manchester – just that little bit altered. There to search out more beautiful drawing books. Paul Klee is reputed to have said that drawing  “is the act of  taking a line for a walk”. To-day Masha and I took a walk for the lines!

Toby Morris is an Auckland-based illustrator, cartoonist and comic artist. You might know him from The Pencilsword and his drawings (with Toby Manhire’s words) for RNZ’s That is the Question.

It’s been a while! I used to come to Christchurch when I was touring in a band, and by that point in the tour everything was always a bit hectic and exhausting. I’m looking forward to being in Christchurch without being stressed and tired! The programme looks great, I’ll probably check out a few talks and park myself up with a sketchbook somewhere to do some drawing – seems like there are lots of beautiful spots of park up.

I love libraries, one of my favourite places. So many of my favourite memories have happened in libraries – whether it’s finding something mind blowing in a strange book that called out from a shelf, or finding a new favourite band in a CD with a curious cover, or even just flirting with girls on the top floor of Wellington Central when I’m supposed to be studying for exams. I love writing and drawing in libraries. Now that I’ve got kids I’m reminded of the power of libraries all over again – such amazing safe spaces to lose yourself.

My go-to comfort read is Tintin in Tibet. It’s such a simple story that I find it kind of pure and clean, it’s quite perfect. All the white space of the swirling snow is quite calming.

I have no sense of smell.

On Free Comic Book Day – Saturday 2 May 2015 –  I went to Comics Compulsion in Papanui, and we bought a My Little Pony comic and got some freebies. 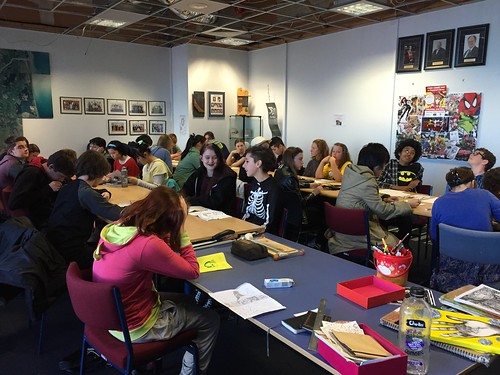 Spencer thought the teens “made some really great work!” He animated some of their pictures together on his blog.

I thought my holidays would be filled with reading, gardening and wondrous dinners out. How wrong I was. Instead it was filled with Zentangles, cleaning out cupboards, a sojourn to Timaru and the third season of The Killing.

I first came across Zentangles through a library blog, thanks to tazliz. I dutifully put my name on the holds list and received a copy of The Joy of Zentangle right smack in middle of my break.

I’ve found it to be just as described. Relaxing, easy, cheap and as challenging or simple as you want it to be. I’m not sure I’ve reached any zen state while doing it, but it is a great way to unwind. You feel no pressure to create a masterpiece, but you can really get into it and try more and more complex designs and ideas. I love the concept that there are no mistakes and if you mess something up, you just work out a way to disguise it or incorporate it into a new design. It’s very portable and I’ve brought it to work to do in my lunch hour as well, so my reading is even more neglected.

The Killing, a Danish murder mystery series, has gripped me from the very first episode of the very first season, and I’m now two thirds through the third and final season. The Library collection has all three seasons. The first season, an epic 20 episodes, had  more twists than an extremely twisty thing, and this season, mercifully only 10 episodes, is just as tangly.

The Danes appear to love their politics, so there is a healthy mix of mystery, mayhem and political intrigue, and it got me hooked on all things Scandinavian with subtitles. I’m thinking about reading the book by the same title by David Hewson. I’m unsure though as it was based on the series as an afterthought, so may not live up to expectations.

Mind you, with all the Zentangling going on, it might be a while until I get to it anyway!

What great books did you read over the holidays, or did you get side tracked?

I first came across zentangles when I was searching through the library new titles lists. I was fascinated. Could there really be an art form I had never come across before?

Well, yes there is. Zentangling is new, it’s fun and (truly) anyone can do it.  It’s a simple process. You take a pencil, draw a frame, add a string then fill in the spaces with ‘tangles’ or patterns using a black ink pen. There’s no rubbing out. You have to trust your intuition and let the design evolve in its own way – very Zen. The results are striking and it’s easy to produce a good looking piece of artwork in a short time.  I guess you could call it doodling with purpose.

Zentangles have been developed by calligrapher, Maria Thomas, and her Buddhist partner, Rick Roberts. One day Rick observed Maria drawing background patterns on a manuscript and noticed she was in a calm state of well-being similar to that achieved through meditation. The couple decided to develop a system that would bring this good feeling to others and zentangles were born.

You do need to become a Certified Zentangle Teacher to teach the system correctly. There are beautifully textured cards to tangle on, micron pens and pencils to buy through the Zentangle website but if you’d like to give zentangling a go without investing more than a couple of dollars – grab a notebook, a black pen and one of the titles available at Christchurch City Libraries. These books will teach you the basics and set you on the path.

thoroughly enjoying the process. I’ve heard of many creative types who’ve struggled to produce any work recently. If you’re like me and are finding it hard to concentrate, this may just be the way back to the creative zone. Limiting colour and size simplifies your choices and you never feel the need to produce something impressive or ‘worthy’. Time disappears and each line takes on its own dimension and purpose.

A zentangle is a puzzle of your own creation and only you know how to solve it. Highly recommended creative escapism.

I have a great view of the stage for this session – for one thing, the audience here is a lot shorter than previous ones; and I’ve also chosen to sit up the front – I am here to see Oliver Jeffers, critically acclaimed award winning author and illustrator of multiple bestselling picture books, and he’s going to be DRAWING. On stage.  Right in front of us.

New Zealand’s own award-winning graphic novel artist and author Dylan Horrocks introduces him. Oliver has chosen to tell us his bio using slides, and once again I have to make Choices – do I Write or do I Watch? Clearly I watch (and you can too, here, although we get to see some extra special bits here at the Festival that he’s added just for us). He talks his way through the slides, and as well as photos of him as a child, and some of his work, we also get to see lots of pictures of things people have sent him, from crocheted penguins, to crazy glasses, and frighteningly, an oversized, realistic model of a human heart. On a pedestal. The room is already full of Warm, and Happy, and by the end of what is, after all, just an introduction, we are all in love.  Everyone, including all the grownups, is wearing an identical goofy grin.

We are still wearing the grins an hour later as we leave. Thanks to an outstanding tagteam live drawing collaboration with Dylan, we now know