Every three years, the Christchurch City Council reviews their 10-year plan. It is your chance to share your views on how best to manage the infrastructure and services that make Christchurch work.

You can read the Long Term Plan documents online. If you want to read the paper copies, libraries and service desks have them available.

Have we got the priorities right? Newsline

On 2 May 1917, Ada Wells was the first woman elected to the Christchurch City Council.

I stand for better housing, for municipal markets, for proper working conditions for all employees, for rest-rooms and play gardens for mothers and children, I shall work for municipal activities in the direction of the uplifting of the people. We should have municipal educational lectures, music, encouragement of drama. We should have women inspectors. It must not be permitted that young boys shall sell newspapers on our streets until late hours… Municipality means the place which gives us freedom and shelter.

Reported on in the Maoriland Worker, 25 April 1917, the successful election of Ada Wells to the Christchurch City Council was “looked upon as certain” due to speeches like that above, her experience and her long standing commitment to improving the condition for women and children. She was 54 when she was campaigning to be elected to the Council for the St Albans Ward on a Labour ticket. Labour had only officially formed in 1916 in New Zealand, and they had the polarising campaign of being against compulsory military service during the First World War.

Her outspoken opinions made her a controversial figure to some, and a trailblazer to others. Ada was in favour of economic independence for married women, free kindergartens, universal access to secondary education, and the repeal of the Contagious Diseases Act 1869. Her involvement with the Peace movement (anti-militarism and anti-conscription) were causes she fought for throughout her life.

Ada Wells had been instrumentally involved in the Women’s Rights campaigns with Kate Sheppard in the 1880s, and she knew that winning the vote for women in 1893 was only a step in gaining equality for women.

She became involved with many societies and organisations that aligned with her opinions. She established the Canterbury Women’s Institute with Professor Alexander Bickerton in 1892, and held the position of President for many years and was a founding member of the National Council of Women of New Zealand in 1896, also serving as their first secretary for many years.

Ada was also heavily involved with the Children’s Aid Society, Peace Society, and was on the Board of Governors of the Christchurch Technical Council as a representative of the Council.

In 1899 she became the second woman elected to the Ashburton and North Canterbury Charitable Aid Board (a precursor of social welfare). She wasn’t shy about stating her opinion on the causes that she was passionate about. Ada often received antagonism from male members of the board when she stated how she thought the aid should be administered. She believed that children should be looked after in cottage homes, rather than boarded out in large orphanages. While on the Charitable Aid Board, she helped instigate an investigation into the treatment of the children at the Waltham Orphanage that the Board itself had responsibility for, even though “the progressive ideas of the lady members had not always been concurred in by the members of the Board”.

Running for Council was the logical next step in a tireless fight for women’s and children’s rights and actioning change at a higher level. Standing with Labour aligned with her anti-militarism ideals. The final outcome for the 1917 Christchurch City Council election was 9 Citizens’ Association nominees, 5 Labour nominees and 2 Independent nominees. Successfully being elected to the Christchurch City Council in 1917 threw the majority of the council into a tail spin on two points, that there was now a female Councillor, and she was with Labour!

Many heated discussions were had in the Council Chamber meetings and the newspapers of the day reported on  Ada Wells speaking her mind. The discussions were varied and often reflected her anti-militarism ideals. There was talk on where war trophies that were presented to the city should be located. Ada stated it was a pity that the war spirit should be fostered at all, and she often often argued for peace rather than continuing the war. She visited the imprisoned conscientious objectors during her time as a councillor, once with her young granddaughter in tow who later recalled him as a nice man.

When the Council declined to support the Canterbury Society of Arts, she said that they might well consider themselves a huckstering, pettifogging people and pleaded in favour of the arts.

While she did stand again in the next election in 1919 her campaign was unsuccessful.

Born Ada Pike on 29 April 1863 in Oxfordshire, England, her family immigrated to Christchurch in 1873. She attended Avonside School and then Canterbury College in 1881 after being awarded the university junior scholarship. She then worked as an assistant teacher at the Christchurch Girls High School.

Ada was 20 when she married the Cathedral Organist Harry Wells (11 years her senior) on 7 January 1884. In 1885 the couple welcomed their first child, a daughter Christabel, and completed their family in quick succession by 1889 with the addition of 2 more daughters (Alma and Alice) and a son (John Stanley). The marriage was not a happy one and Ada often provided the only source of income for the family through teaching, or working as a healer through massage therapy which she learnt from her mother Maria Pike.

She juggled raising and supporting her family while working for the equality of women and this demonstrated her admirably strong character. When she was campaigning to become a councillor, she was already a grandmother of five.

A cause might be despised, obscure, rejected, she not only helped it all the same, she helped it all the more, and in the dark and stormy days of unfounded truth she was always to the front.
Press, Volume LXIX, Issue 20812, 23 March 1933, Papers Past

In 1933 the Ada Wells Memorial prize was established for undergraduates, or graduates of up to three years, and awarded for an essay on the exposition of some subject chosen from literature having reference to social ideals. This prize is still awarded annually.

For a lively fictionalised account of Ada Wells, her eccentric unmarried daughter Bim, and Kate Sheppard I can certainly recommend Farewell Speech by Rachel McAlpine, who is a great-granddaughter of Ada Wells. Based on family stories and talking to those who knew the women, three very strong, different personalities come clearly through.

Women In The Council Chamber: Ada Wells
This brief political biography originally featured in an Our City O-Tautahi exhibition from 19 – 30 September 2006, featuring Christchurch’s own “Women in the Council Chamber”, initiated and co-ordinated by Cr Anna Crighton.

Road cones and Christchurch. It’s a thing. Not so much a symbiotic relationship as a grudging one. We need them more than they need us, I think.

They’ve also become something of a symbol of the rebuild and there’s no surer sign that an item has wormed its way into the collective psyche than when it turns up in our art. So it’s no great surprise that the humble road cone has once again provided inspiration for CPIT Certificate in Design students in the exhibition ‘Road Worthy’ that is currently on in the Christchurch City Council foyer.

I happened upon the exhibition earlier in the week and it is filled with whimsy and humour. It is intended to acknowledge road workers and show appreciation to those still busy repairing our city’s infrastructure.

The exhibition is on until the end of next week, 20 November, at Civic Offices, 53 Hereford St and is guaranteed to give you a wry smile.

If you can’t make the exhibition you can see photos of some of the pieces on our Flickr. 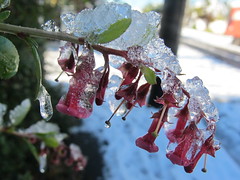 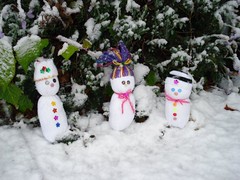 Is it art or graffiti? If you’ve been meaning to check out the record breaking Rise street art exhibition, that is showing at Canterbury Museum, you’ve only got a little while before it wraps up on March 23rd.

I expect the huge colourful murals created by local and international artists currently adorning walls around the central city, will be with us a lot longer and may continue the discussion that’s been sparked over what constitutes art as opposed to graffiti.

Vigorous debate has played out in Christchurch newspapers over the past few weeks, but you can make your own mind up!   For more on the world of street art, there are plenty of books available, and an excellent starting point would be the seminal work Subway Art by Martha Cooper & Henry Chalfont.

The exhibition features a private collection of works by Banksy, who is no stranger to public comment and curiosity. More on this mystery man can be found at our libraries.  I’ve just finished Banksy: The man behind the wall which, while it could have benefited from some judicious editing in my humble opinion, does give an insight into the secretive artist and his street art/graffiti origins in Bristol.

One of my Banksy favourites of the exhibition, was ‘Kids on Guns’, but ‘Kids on Gins’ by the artist known as Milton Springsteen is a brilliant take on the original.  As are his subversions of iconic New Zealand art works.  His series of ‘Corrupt Classics’ was one of the exhibition delights for me.

On the flip side, if it’s graffiti and tagging that’s an issue for your own property or neighbourhood, the Christchurch City Council wants to know.  If you’d like to take an active role in helping remove graffiti from around the city then the team at the Graffiti Programme would love to hear from you!

Two of my favourite large street art works are these ones on a couple of walls in Sydenham.

What’s your take on this style of art? Love it or loathe it?