29 October 1830
Te Rauparaha charters the “Elizabeth” (under the unscrupulous Captain Stewart) and sails for Akaroa.

1 November 1906
New Zealand International Exhibition (the biggest in the country to that time) opens in Hagley Park. Over 1 million people visited the exhibition during the next few months. A branch railway line was built across North Hagley Park to service the exhibition. The attractions included New Zealand’s first professional symphony orchestra [conducted by Alfred Hill], and the first Dominion pipe band contest which was won by the Dunedin Highland Pipe Band.

2 November 1899
Balloonist Captain Lorraine lost at sea after an ascent from Lancaster Park.

2 November 1914
Riccarton (Deans) Bush presented to the city by the Deans family.

More October and November events in our Christchurch chronology.

11 September 1928
Kingsford-Smith and his crew (Ulm, Litchfield and McWilliams) land at Wigram in “Southern Cross” after the first trans-Tasman flight. A crowd of 30,000, alerted by all-night radio broadcasts, had gathered at the airfield.

13 September 1877
Christchurch Girls High School (designed by Thomas Cane) opens on the corner of Hereford Street and Rolleston Avenue. The school moved to its present Cranmer Square site in 1881. The original school is now part of the Arts Centre. The Cranmer Square building was demolished in 2011.

14 September 1976
Inter-island ferry service from Lyttelton ends with the last sailing of the Rangatira.

More September events in the Chronology.

4 September 2010
The Darfield earthquake woke Canterbury at 4:35am. The magnitude 7.1. quake was centred 40km west of Christchurch.

More September events in the Chronology.

11 January 1851
First copy of the “Lyttelton Times”, edited by J.E. FitzGerald. Read the first issue online.
In January 1988, construction began on what was once Christchurch’s tallest building to date, the 76.3m Price Waterhouse building.

1 January 1908
Shackleton expedition sails for Antarctica in “Nimrod”. A crowd estimated as high as 50,000 watched the departure – probably the largest in Lyttelton’s history.

4 January 1876
First meeting of the Christchurch Drainage Board.

More December and January events in our Christchurch chronology.

26 December 1863
Opening of the Royal Princess Theatre, the city’s first true theatre. It had been the Canterbury Music Hall.

27 December 1850
“Cressy” arrives. These 4 ships brought a total of 773 settlers. Although Cantabrians like to commemorate these “first four ships”, there were actually 8 chartered vessels which brought 1500 Canterbury Association settlers in the first few months. By the following December, 19 ships had brought over 3000 settlers.

16 December 1864
149 years ago the foundation stone was laid for ChristChurch Cathedral. The weather was atrocious. 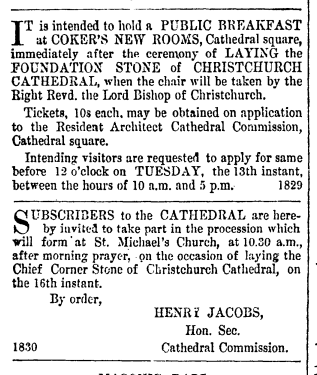 20 December 1955
First Antarctic flights by USN Operation Deep Freeze from Christchurch. Browse our page on Antarctica and its Christchurch connections.

22 December 1885
Statue of William Moorhouse unveiled in the Botanic Gardens.

Like Loading...
9 December 1867
Lyttelton railway tunnel was the first in the world to be drilled through a volcano rim. It was New Zealand’s first tunnel, and at the time was described as one of the longest in the world, yet had been planned and financed by this tiny colonial settlement whose population was just over 9000, (6,647 in Christchurch and 2,510 in Lyttelton.)

12 December 1849
New Zealand Company agrees to reserve two and a half million acres as a site for the Canterbury settlement.

13 December 1942
Premiere in Christchurch of Landfall in Unknown Seas by Douglas Lilburn and Allen Curnow.

15 December 1848
Captain Joseph Thomas, William Fox, and surveyors Cass and Torlesse arrive at the site of Lyttelton in the “Fly”. Thomas names the harbour “Port Victoria”. He and his party had been sent by the Canterbury Association to choose a site for the new colony and make the necessary preparations for the arrival of settlers in 1850.

27 November 1985
Remains of swimming pool uncovered when excavating behind No 1 stand at Lancaster Park. Pool used as venue for 1907 Australian and New Zealand Swimming Championships.

28 November 1893
Women vote for the first time in parliamentary elections.

28 November 1964
Opening of Cashin Quay, Lyttelton Harbour. The engineering techniques used in reclaiming this area were unique in the world.