The winners of the 2015 Carnegie and Greenaway Medals were announced on Monday in the UK.  Tanya Landman was awarded the CILIP Carnegie Medal for Buffalo soldier and William Grill was awarded the CILIP Kate Greenaway Medal for his debut picture book, Shackleton’s Journey.  They each received a medal and £500 of books to donate to their local library and William Grill also received the Colin Mears Award of £5,000.

Charley, a young African-American slave from the Deep South, is freed at the end of the American Civil War. However her freedom is met with tragedy after her adopted mother is raped and lynched at the hands of a mob, and Charley finds herself alone with no protection. In a terrifyingly lawless land, where the colour of a person’s skin can bring violent death, Charley disguises herself as a man and joins the army. Trapped in a world of injustice and inequality, it’s only when Charley is posted to Apache territory to fight “savage Indians” that she begins to learn about who she is and what it is to be truly free.

The judges said: Engrossing from the very beginning, the strong narrative voice engages the reader in the world described; perfectly conveying raw emotions without the overuse of sentimentality. This is a beautiful, powerful piece of writing that will remain with readers long after the last page.

In the last days of the Heroic Age of Exploration, Ernest Shackleton dreamed of crossing the frozen heart of Antarctica, a place of ferocious seas, uncharted mountains and bone-chilling cold. But when his ship, the Endurance, became trapped in the deadly grip of the ice, Shackleton’s dreams of crossing Antarctica were shattered. Stranded in a cold, white world, and thousands of miles from home, the men of the expedition set out on a desperate trek across the ice in search of rescue.

The judges said: This beautiful non-fiction book seems to effortlessly bring a modern and fresh feel to the story of Ernest Shackleton, whilst remaining traditional and classic. This is an exciting, quality book which provides a true experience and reminds us that it is the people, not the journey, that truly matter.

I haven’t read either of these books but they both sound really interesting.  My picks were More than this by Patrick Ness for the Carnegie and Goth Girl and the Ghost of a Mouse, written and illustrated by Chris Riddell for the Greenaway.  There were certainly some great books on the shortlist and I’m sure it would have been a tough decision.

The Carnegie Medal is awarded annually to the writer of an outstanding book for children. The shortlisted books this year were:

The Greenaway Medal is awarded annually for an outstanding book in terms of illustration for children and young people. The shortlisted books this year were:

The New Zealand Book Awards for Children and Young Adults are trying something new this year with an expanded Children’s Choice Awards. Children in schools from around the country have been given the opportunity to select their own list of finalists for the 2015 Children’s Choice Award.  More than 6,500 children and young adults from 106 schools from throughout the country have selected their own finalists from the 149 books submitted for the Awards  It’s an awesome opportunity and something that I wish I had had the chance to do when I was at school. I think it’s a great list and it’s good to see the difference between the children’s finalists and those of the judges.

Voting for the Children’s Choice is open now and closes on Friday, 31 July. This year there will be a winner in each category. We’ll be reviewing some of finalist books and interviewing some of the finalist authors here on the blog. Go and vote for your favourite book now.

Check out the finalist list for the 2015 Children’s Choice Award:

Congratulations to all the finalists and the winners!  Here are the winners:

Grab a copy of these award-winning books at your library. To find out more about the LIANZA Children’s and Young Adult’s Book Awards check out our page on the awards.

Have you ever wanted to come to the library in your pyjamas? Next week you’ll get the chance to do just that when Christchurch City Libraries celebrates the New Zealand Post Book Awards for Children and Young Adults Festival. The Festival, which runs from 17-25 May, gives children, young adults, and their families the chance to celebrate the finalist books, authors and illustrators at various events around the country.

Here in Christchurch we are running Books Before Bedtime Pyjama Parties at Papanui, Shirley and South Libraries, where children and their families can come to the library after dark and enjoy stories, craft activities and have fun with iPads.

For teens and adults we also have The Great NZ Children’s Book Quiz, a fun night where you and your friends can test your knowledge of the book awards and this year’s finalists.

One of my favourite events during Festival week is visiting local primary schools to read and promote the finalist books. As well as encouraging children to read the wonderful finalist books, we also give away heaps of books and other goodies, including holographic bookmarks. It’s tonnes of fun and the children always enjoy it.

We hope to see you at one of our events next week. 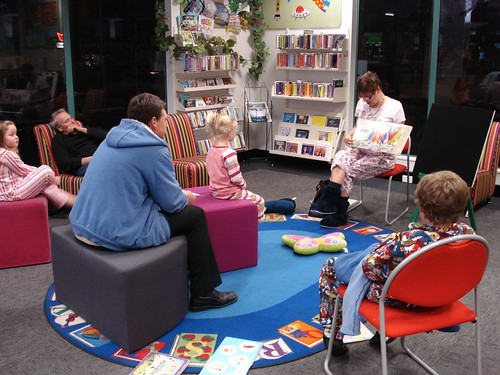 Here are the Picture book finalists

The finalists in the 2013 New Zealand Post Children’s Book Awards gathered in Christchurch on Monday night for the awards ceremony. The awards night is always themed, and this year the organisers went for a Witch in the Cherry Tree theme in honour of Margaret Mahy. The book of the year was also renamed the “New Zealand Post Margaret Mahy Book of the Year”.

I was  nervous myself, hoping that my favourites would take out the award, so I’m sure the authors and illustrators themselves were incredibly nervous. Overall, I was pleased to see a couple of my favourites win awards, but I was disappointed that others missed out. I think that Red Rocks and The Nature of Ash are amazing books and if I could give Rachael King and Mandy Hager an award I would.

Our pages on the NZ Post Children’s Book awards list current and previous winners, as well as category finalists.

The LIANZA Book Awards are a chance for librarians across New Zealand to pick their favourite New Zealand books of the year.  The winners have just been announced and they are:

Congratulations to all the winners!  We are lucky enough to have the winner of the Esther Glen Award, Richard Newsome, coming to Central Library for the launch of the Christchurch Kids Blog on Wednesday 8 September, from 7-8pm.  We will also have an interview with Richard on the blog after the launch.  To find out more about Richard Newsome’s visit, check out the What’s On page on the library website.

Have you read any of the winning books?

Neil Gaiman has been awarded the most sought after prize for children’s fiction in the UK, the CILIP Carnegie Medal, for his book, The Graveyard Book.  This is the second major prize that Gaiman has won for The Graveyard Book as he won the US equivalent of the prize, the Newberry medal, making him the first author to win both the prizes for the same book.  Although it wasn’t my favourite book in the shortlist (I would have voted for Patrick Ness’ Ask and the Answer) Neil Gaiman is a fantastic writer and definitely deserves the praise.

Australian illustrator, Freya Blackwood is the winner of the 2010 CILIP Kate Greenaway Medal, the UK’s most prestigious award for children’s illustration.  Her book, Harry and Hopper is a moving book about a young boy Harry, who has to come to terms with the sudden death of his best friend, his dog Hopper.  The judges commented that “Freya Blackwood excels in her use of muted colour, perspective, and exterior and interior space to give a powerful take on the father-son relationship, and a much-loved pet’s death. A sensitive issue for young children is beautifully handled, with Harry’s emotions and memories of Hopper expressed visually to great effect.”  It is a beautifully produced book and a well-deserved winner.

Check out the shortlist from this year’s Carnegie and Kate Greenaway Medal , as well as videos from the awards presentation on the awards website.

It’s children’s and young adult’s book awards season at the moment, with the shortlists for two prominent awards being announced.  The main award that recognises excellence in teenage fiction is the Booktrust Teenage Prize and the shortlist this year is very strong.  I was pleased to see that one of my favourite authors, Patrick Ness, was shortlisted again this year for his heart-stopping follow up to the award-winning The Knife of Never Letting Go, The Ask and the Answer.  The other titles on the shortlist include Auslander by Paul Dowswell, The Graveyard Book by Neil Gaiman, Ostrich Boys by Keith Gray, Ant Colony by Jenny Valentine, and The Vanishing of Katharina Linden by Helen Grant.  All of these books have got fantastic reviews and are all very strong contenders for the award.

The other main shortlist that has been announced recently is for the prestigious Guardian Children’s Fiction Prize.  While there are fewer contenders for this prize (only 4) they are all extremely good writers who have writen some interesting and varied stories.  Siobhan Dowd, who sadly passed away from cancer several years ago, wrote some very unique stories and her books have been nominated and won several awards in the past few years.  She has been shortlisted this year for her novel, Solace of the Road, alongside Then by Maurice Gleitzman, Nation by Terry Pratchett, and Exposure by Mal Peet.

Who do you think should win?  My picks are Ask and the Answer for the Booktrust Teenage Prize and Solace of the Road for the Guardian Prize.