165 years ago this January, a ship called the Mary arrived in Lyttelton bringing two hives of honey bees from Nelson.

The history of introduced bees in New Zealand is unusually linked with women named Mary. Back in 1839, a woman called Mary Bumby first brought European bees to New Zealand. Miss Bumby, with her appropriately bee-ish name, was the sister of a missionary, and she was bee-autiful:

“A vision of delight. Soft brown hair, worn in ringlets after the fashion of that time, a complexion that entitled her to the name of the ‘Bonny English Rose’ and a smile that lighted up gentle hazel eyes, out of which beaned only loving thoughts.” ‘The Immigrant Bees‘ Peter Barrett (p77).

How she managed to keep a hive of bees alive on a ship for the seven month journey with only loving thoughts in her head, I can only wonder. Mary Bumby and her bees buzzed into Hokianga harbour in March 1839. Before then, we were not entirely bee-reft of bees – New Zealand has 28 species of native bees, but they weren’t great for making commercial honey. And kiwis are sweet on their honey – on average, we eat about 1.5kgs of honey a year – each!

Three years later in 1842, bees arrived the South Island. They were sent over from London by Mrs Mary Anne Allom and sailed into Nelson alive and well. Her reason for sending them over is remarkable:

“My son formed one of the ten cadets who sailed last year for Wellington. After he was gone, I began to reflect upon the many things he would feel at a loss for when he arrived, one among the many, butter; this, I thought might be remedied by substituting honey, when I found there was no bees, at least honeybees, in New Zealand, I accordingly determined that I would send some.” p95, The Immigrant Bees.

Some parents send money to their kids on their OE – Mary Ann Allom sent a colony of bees. You only hope her son (Albert James Allom, who was 16 when he left home and his mother in London) appreciated the effort. The Society for the Encouragement of Arts, Adelphi, London certainly did – and awarded her with the silver Isis medal in 1845 for her successful introduction of the bees.

It could well have been descendants of these bees that were sent down to Canterbury by yet another Mary – this time it was the ship Mary, a schooner from Nelson to Lyttelton that arrived on January the 10th 1852 with two bee hives on board. (See the newspaper article in the Lyttelton Times, 17th January 1852 on PapersPast.)

From there, bees have spread through the rest of New Zealand. Māori were the first commercial beekeepers; by the 1860s they were selling large quantities of honey from bee nests in the bush. William Charles Cotton, dubbed the Grand Beekeper in New Zealand, published many books about beekeeping including one entirely in te reo Māori ‘Ko Nga Pī’ (The bees).

For the buzz on bees:
Comb through our catalogue for books about bees or beekeeping. 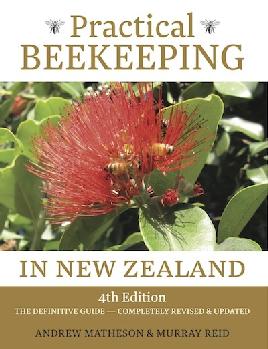 Swarm these eResources for more about bees:

September is Bee Aware Month, an initiative from the National Beekeepers’ Association that aims to educate us on the importance of bees to our livelihood, environment and economy.

Two thirds of the food that we eat is pollinated by bees so without them we will be in trouble. As September is the beginning of Spring it’s a great time to plan what you’ll be doing in with your garden over the warmer months. This year’s theme is “feed the bees” so now would be a great time for gardeners to consider adding “bee-friendly” plants to their property, if not an actual hive.

And don’t be fooled into thinking that if you live centrally there’s not much point in having plants that bees like. There are “urban bees” in Christchurch (and most cities). For instance, did you know there’s a hive on the roof of C1 espresso? Honey bees can travel several kilometres to find nectar producing flowers so even if there are no hives on your block, your potted lavender may still be visited by a bee (or several).

If you’re keen, to either make your garden a bee-haven or maybe get a hive yourself, or even just rent one, you might want to have a look at –

I don’t believe I have ever read a fantasy book before, science fiction sure, but not fantasy.  After a long reading hiatus, I was perusing a list of books nominated for various recent awards to kick-start me into reading again.

I must confess it was the cover of The Bees by Laline Paull that hooked me in – embossed and golden. Only when I started reading did I notice ‘fantasy’ on the spine. I always think about witches, dragons and ‘far away lands’ when I think fantasy, so a book about a plucky and rather magical bee and the hive she lives in didn’t fit the narrow idea I had of the genre.

The book is a debut novel for Laline Paull, a playwright and screenwriter, and was shortlisted for the 2015 Baileys Women’s Prize for Fiction, with judges calling it “an Animal Farm for the 21st century”.

We meet Flora 717 at her birth, fighting her way out of her hive cell.  She is of the worker class, destined to clean and tidy after others for her short life. But this wee worker is different. She speaks, unlike others of her class, and she has an intelligence that soon sees her crossing antennae with those in the hive of higher classes. As the seasons progress, changes in the hive bring on new challenges to both Flora and the hive.

As Flora’s tongue unrolled toward the head of nectar, tiny particles of orange pollen tingled against her fur. The taste of the nectar was so bright and the energy release so sudden that she almost fell off the flower head.

I didn’t think I’d find myself rooting for a humble bee, but I was willing her on to achieve, find joy, survive the horrors of wasp attack, disease and resentment from those who believed she was getting above her station.

Well written, tense in places and tender in others, it’s a great read. I recommend you add it to your list. Oh and it gave my husband and me an excuse to have silly pun duels. “Honey, I’m hiving trouble bee-lieving you.” “I shall wax lyrical.”

My neighbours are doing it. Michelle Obama is doing it. They’re keeping bees! The National Beekeepers’ Association of New Zealand is highlighting the importance of bees, and this month is Bee Aware Month.

Bees around the world are in trouble. A world without bees would be a very bleak place indeed. Much of our food depends on pollination by bees as do our gardens and a lot of other products we rely on. Over $5 billion of New Zealand’s agricultural exports also depend on bees. Bee numbers worldwide are in decline and we must do all that we can to save them before it’s too late.

So how can you help? Easy ways you can give these hardworkers a happy life include planting bee friendly plants, and being careful when using pesticides in your garden, or better still stopping using them altogether.

You could also start your own hive. The Beekeepers’ Association has helpful information, and in Christchurch you can now rent a hive and have someone else come and do all the work for you. The library of course has a large number of beekeeping titles that will help make your garden and your hive a bee mecca.