This year the masses will descend on Horncastle Arena for the annual Armageddon convention on the weekend of 2-4 June. The 4th of June being, conveniently, Queen’s Birthday holiday.

I myself have attended Armageddon religiously since 2012, after discovering that an actor from one of my then (still) favorite television shows would be in attendance. Last year I somewhat satiated my Tolkien obsession and obtained Pippin’s [Billy Boyd’s] signature on my beautifully illustrated yet dog-eared copy of ‘The Lord of the Rings.’ Other highlights include spending my hard-earned money on a replica Evenstar and discovering the stall that sells moonshine in hipster-ish mason-style jars. Does this still exist? Where was it last year? ;-(

Not much has changed. Still a shameless fan girl.

Because I get excited about these things, in preparation I will be wading through several of my favourite Armageddon-worthy television shows over the coming weekends: check out our catalogue for inspiration, and for my top picks.

And if you have a lot of time on your hands…check out these books:

A Game of Thrones – George Martin’s epic fantasy is intimidating to say the least, but well worth the time. Pick it up now and you just might get through it before the long-awaited Season 8 is released.

Supernatural – Ah, Dean and Sam. Sam and Dean. The excellent chemistry between the two lead actors carried me through a whooping 13 seasons of the TV show, but this fan-fiction is helping with my withdrawals somewhat. 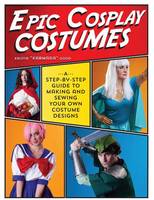 Epic Cosplay Costumes – Who doesn’t love a good dress up…and the chance to upstage all the other Armageddon-goers.

Star Trek – Star Trek 101. Visually stunning effort by DK. If not the most comprehensive of guides, a great intro to the world of Star Trek for budding fans!

Photos from our Collection

For those of you who haven’t had the pleasure of attending an Armageddon convention before, here is some of what you’ve been missing out on:

For all you gamers and budding artists out there, in honour of Youth Week we are putting on some exciting events at Shirley Library. Come along to our Playstation Tournament this Friday to WIN great prizes, and get in on this Drawing and Visual Storytelling Workshop, hosted by comic illustrator/fantasy artist Ryan Green, this Saturday.

Will you be dressing up this year? See you there 🙂

Inexplicably she looked worried, “But I’m not ready for the end of the world yet!”

Ooh, we are obviously talking about two different events – the one I want to go to is the Armageddon Entertainment Expo which is happening in Christchurch at the Horncastle Arena, costs $15 to get in (or $6 for children aged 5-12 years), and involves lots of fun, not the one talked about in the Book of Revelations…

The Guest list shows some great people will be there:

Or try the following –

There was much excitement in the Beecrafty household last weekend! We went to Armageddon and met Marina Sirtis (a.k.a. Deanna Troi from Star Trek: The Next Generation – see the signed photo we got)! 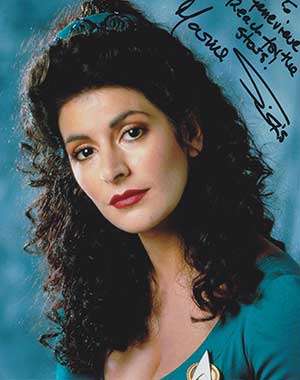 Even Mr Beecrafty was so star struck that he lamented having to wash his hand after shaking hands with the beautiful Betazoid heroine! Marina (yes, we’re on a first name basis now) was just lovely, so warm and funny despite saying that the hardest things about conventions was having to be nice to people for so long! We were all amazed to hear her British accent, so different from her screen persona’s voice. I asked her whether she thought Riker was more handsome with or without the beard – she preferred without, while I preferred with which she said was no surprise when she saw my bewhiskered husband. I admitted that the Young Lad actually preferred Star Wars, as I haven’t fully indoctrinated him yet, and we left to her cry of “Bad parent, bad parent!”

All in all, as Miss Missy put it, it was the best day ever. So, in honour of this momentous fangirl experience, I have scoured the catalogue for all things Trek. Naturally we have Star Trek on DVD, and plenty of Trek fiction of course. But wait, there’s more!

If cosplay is your thing, then Star Trek: The Visual Dictionary: the Ultimate Guide to Characters, Aliens, and Technology or the five decades of fashion from the final frontier found in Star Trek Costumes are sure to inspire.

For fans of Mr Spock:

I’ll have to take a look at Star Wars Vs. Star Trek – even though we all know that Stormtroopers are the worst shots in the Galaxy, not to mention their susceptibility to Jedi mind tricks would surely mean they’d be no match for the Vulcans. Now to convince the Young Lad…

And if you still want more, then why not take a look at my Trekdom list?

Despite having lived in Christchurch for six years now, somehow I’ve never quite made it to Armageddon Expo, the annual celebration for pop culture geeks: always something else to do, somewhere to go, or something else to pay for… But this year it falls on my birthday, so I am going instead of just dropping off the teenagers.

Phew! Sorted!  How about you?  Are you going to Armageddon Christchurch this weekend?

Every year at the beginning of July, Christchurch is over-run by hordes of Doctor Who devotees, Star Wars Storm Troopers, anime kids, and all sorts of assorted science fiction, fantasy, comic-reading, game-playing fans. And every year we send intrepid (if slightly fearful) library reporters to cover the weekend.  You can read up on previous years’ visits here, and here; we will be covering the event again this year, with blogging, pics on Flickr, and even hopefully an interview with one of this year’s star visitors, best-selling author Christopher Paolini.

Visit the Armageddon website for more information, and don’t forget that the library has a great selection of graphic novels, DVDs, and all things fan-related (including cosplay and costume books if you fancy a last-minute spot of dress-ups, for you or the kids …).

However you choose to dress, we’ll see you Saturday at the icecream-eating competition.  Or the anime screening. Or maybe next to the time-machine display. Or stocking up on comics and replica swords …

The country’s biggest pop culture expo – Armageddon – is coming to the Christchurch Convention Centre this weekend. We’re giving away tickets to 12- to 18-year-old library members. Two double passes are up for grabs over on thepulse.org.nz. You could make a young person’s weekend by telling them about this competition – so pass it on!

The full calendar of events for the weekend is available on the Armageddon Expo website. You can also read our previous reports from Armageddon on The Pulse / Te Auaha.

Customers’ entries have to tell us the name of their favourite pop culture character or personality appearing at the Armageddon Expo and the question they’d most like to ask them. So who would you pick, and what would you ask?

With the Armageddon Expo coming to Christchurch on the 26th and 27th, what better time to have a wee

rave about what is (along with mills & boon romance novels) surely one of the most underrated and often ignored literary forms… the super-hero comic book. Sure, there is a lot that’s best avoided unless you’re a teenage male with a fascination for spandex clad bodies, but here are some essentials from our library catalogue you really should give a try.

The comic book (since a recent interview I read with Ed Norton about his role on the upcoming Incredible Hulk movie I’ve sworn off using the g word) that has kept my faith in the genre in recent years has been Daredevil. Wipe your mind of the terrible movie from a few years ago, this is one of the best titles on the comic book racks today. Take your favorite Scorcese gangster flick, throw in blind superhero Daredevil (and the occasional supervillain) and you’re close to why this title works so well.

One of the most creative writers in comics today is Grant Morrison. Almost anything penned by Morrison is comic book gold. Try his run on X-Men or his current reinvention of the big blue in All-Star Superman.  Buffy the Vampire Slayer creator Joss Whedon has been doing epic sci-fi adventuresomeness* with the X-Men recently also.

Currently being made into a Hollywood blockbuster is the ‘unfilmable’ Watchmen by comic deity Alan Moore. On its publication 20 years ago this book turned the comic book world on its head and proved that comics could be ‘real literature’ too.

Comics without pictures… hmm? Austin Grossman’s novel Soon I Will Be Invincible follows the triumphs and downfalls of evil genius (and wannabe world dominator) Doctor Impossible. Superhero novels (hey! where are the pretty pictures) are usually doomed to failure in what is essentially a visual medium but Grossman’s mix of humour and pathos really clicks in this unique first novel.

There you go, a few starting points for anyone wanting to sample this multi-coloured world of diabolical schemes and utility belts. Hopefully, you’ll be hooked (and I’ll have someone else to talk to about Matt Murdock and his latest run-in with Mr Fear).

*it’s in my dictionary