With temperatures that can fall to -60 degrees celsius, months without sunlight, and a desert landscape nearly devoid of moisture, the continent of Antarctica is perhaps the most desolate place on earth. Yet every September, foreign scientists and military personnel descend upon the city of Christchurch in preparation for their journey to this frozen landscape. In doing so they are continuing a tradition which is well over a century old.

Situated at a latitude of 43.5321 South, Christchurch is one of the five official world gateway cities for Antarctica. By the end of September, the first flights to the ice start to depart from Christchurch International Airport. The city marks this occasion with a series of programmes and events known as Antarctic Season Opening.

Christchurch was first used as a port of call for scientific teams journeying to the Antarctic during the British National Antarctic Expedition (1901-1904), also known as the Discovery Expedition. Led by Robert Falcon Scott, the Discovery arrived in Lyttelton on 29 November 1901.

During his time in Christchurch, Scott was a guest at the Rhodes family home in Merivale, Te Koraha. To assist the expedition, a magnetic observatory was constructed in the Christchurch Botanic Gardens to allow the members to conduct magnetic surveys. Quail Island in Lyttelton Harbour was used to keep the expedition’s 23 Siberian dogs in quarrantine. The kennels where these dogs were housed have recently been restored.

Prior to his departure, Scott wrote a letter to the Town Clerk of Christchurch, thanking the people of Canterbury for their hospitality and the donation of sheep to his expedition. The city remained in the memory of the men during their time on the ice, with fish trap hole number 3, used by marine biologist Thomas Vere Hodgson to capture samples of marine life, being renamed “Christchurch”.

Ernest Shackleton, who had served on the Discovery Expedition, also made use of Lyttelton during his Nimrod Expedition (1907-1909). As with the previous journey, Quail Island acted as a quarantine station for the expedition’s dogs and Manchurian ponies.

Historic footage shows the ponies being loaded on to the Nimrod against the backdrop of Lyttelton port. Departing from Lyttelton on New Year’s Day 1908, the Nimrod was towed to the Antarctic Circle by the Koonya which had been loaned by the New Zealand Government. Shackleton’s Whisky from this expedition was recently discovered in 2007 and thawed out in a temperature controlled room at the Canterbury Museum. On his return from the Antarctic, Shackleton donated money raised during one of his lectures to the foundation of the Christchurch Girls’ Training Hostel.

Robert Falcon Scott returned to Christchurch in October 1910 at the beginning of his ill-fated Terra Nova Expedition (1910-1913). Mules from the hill station of Simla in India were donated by the Indian government in 1911 and housed on Quail Island prior to the expedition’s departure. Following the death of Scott, a statue carved by his widow, Kathleen Scott, was shipped to New Zealand in 1916 and unveiled on 9 February 1917.

Later that month, on 24 February, after returning from his Imperial Trans-Antarctic Expedition (1914-1917), Shackleton planted an oak on the grounds of Christchurch Girls’ Training Hostel.

In preparation for the International Geophysical Year (IGY) 1957 various nations prepared to send teams of scientists to the Antarctic. The cooperation of the nations would eventually lead to the establishment of the Antarctic Treaty of 1959.

New Zealand contributed to the IGY by playing an important role in the Commonwealth Trans-Antarctic Expedition (1955-1958). Sir Edmund Hillary led the New Zealanders who oversaw the establishment of Scott Base. While laying supply depots for the British party that was crossing Antarctica from the Weddell Sea to McMurdo Sound, Hillary, Murray Ellis, Peter Mulgrew and Derek Wright reached the South Pole on 4 January 1958 in converted Ferguson tractors. This was the first overland expedition to reach the pole since Scott and Amundsen. The Tucker Sno-cat, named Able, which was used in the crossing by the Trans-Antarctic Expedition leader, Vivian Fuchs, is now housed in the Canterbury Museum.

Known as cheech to the Americans based there, Christchurch became the base for the United States own contributions to the IGY. Between October and December 1955, US aircraft arrived at Wigram to prepare for Operation Deep Freeze I (1955-1956). On 10 December, the US navy icebreaker, USS Glacier departed from Lyttelton Harbour. On 20 December, in the early hours of the morning, two ski-equipped Lockheed P2V-2N Neptunes took off from what was then Harewood airport (now Christchurch International Airport). Fourteen hours later, the first of the two Neptunes successfully landed at McMurdo Sound, Antarctica.

For its role in Operation Deep Freeze, the United States gifted the Native American totem pole (carved in 1959) which stood in Little Hagley Park until 1980 when it was transferred to the entrance of the airport.

Wishing to highlight the strategic role it played in Antarctic operations, the Christchurch International Airport opened the International Antarctic Centre, with its main feature, the Antarctic Attraction, in 1992.

Despite many different organisations with connections to Antarctica being based in Christchurch, there was no local body to act as a mediator between them. In order to coordinate the efforts of these various groups, an Antarctic City Strategy was developed by the Christchurch City Council which, in 2016, led to the establishment of the Antarctic Office.

It’s all go portside at the moment, as we at Lyttelton Library watch the repairs proceeding apace from our temporary perch up the hill in the Recreation Centre’s Trinity Hall on Winchester Street. The in-progress library now has a dashing white coat of paint (goodbye pink!), lovely new double-glazed windows, and a smart new resident outside… 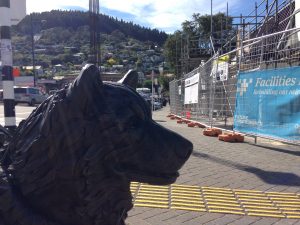 This gorgeous bronze sled dog, nicknamed Hector, was sculpted by Mark Whyte and stands guard by what will be our new customer entrance. He’s looking towards Quail Island, where his real-life predecessors were housed and trained. Hector is there to recognise and celebrate Lyttelton’s contribution to exploration in Antarctica and the Southern Ocean and he symbolises the courage, commitment and comradeship of all those involved. (He’s also a hit with local kids and tourists – it seems the thing to do is have your selfie taken with Hector wearing your sunglasses!)

Meanwhile, inside the library, the new spaces are starting to take shape. Here are a few shots of the work in progress:

We’re enjoying our current sojourn in sunny Trinity Hall (particularly with Jenny the giraffe watching over everything) and looking forward to next year, when we’ll be back in the heart of things (and the Saturday market) again!

Lyttelton Library is due to reopen in March 2017. 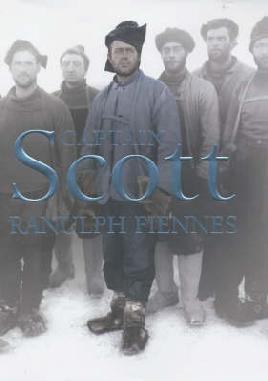 But once a man has faced the unknown, that terror becomes the known.
Antoine de Saint-Exupery.

I can’t wait to see The Heart of the Great Alone: Scott, Shackleton & Antarctic Photography at the Canterbury Museum (the library has copies of the book).

H. G. Ponting’s images record Scott’s Terra Nova expedition of 1910 – 1913 and F. Hurley’s icescapes were taken during Ernest Shackleton’s polar expedition on the Endurance in 1914-16. They were presented to King George V and today belong to the Royal Photograph Collection.

From 20 August 2010 to 20 February 2011 Canterbury Museum is the only venue for this exhibition outside the Queen’s galleries. Not bad, eh?

I’m amazed by how they managed to get such good photos in such weather conditions, it demonstrates that it’s not the equipment that matters but the photographer’s ability (remember to breathe in when you press the shutter!).

If you want to hear and see how Antarctic photography works nowadays, book your spot at the Canterbury Museum for New Zealand’s independent publishing mogul, photographer and conservationist Craig Potton‘s presentation on the 26th of August 2010.

Or perhaps you might prefer to listen to the Curator of the Royal Photograph Collection on the 24th of August 2010.

Who is your favourite great outdoors photographer?

I am very fond of Light and Landscape by Andris Apse, beautiful New Zealand. And it’s hard not to be moved by Ansel Adams‘ black and white masterpieces.