Ant Sang has worked on a diverse range of projects, ranging from solo novels such as Dharma Punks and Shaolin Burning to collaborative projects such as working on bro’Town, or their most recent collaboration with screenwriter Michael Bennett on graphic novel Helen and the Go-Go Ninjas. Writer and comics fan Tracy Farr questioned Ant on his artistic process, the ideas behind his works, and his progression as a cartoonist.

How does he translate someone else’s words into pictures (as in Helen and the Go-Go Ninjas)? Through reading the script, trying to get a feel for the characters and the world and what that looks like, and doing a lot of sketches. This can take time because they aren’t his creations, having to figure out what his connections are to the characters. This is often an evolving process — for example, Helen at one point had a shaved head, but Ant joked that she looked a bit too Charlize Theron in Mad Max and so her hairstyle changed.

When asked about his decision to include strong female characters in his work, Ant seemed understandably baffled.

I didn’t set out consciously to do it… I write a lot of Asian characters because I am Chinese, but I didn’t set out to represent them, it just felt natural. I’m very interested in where you fit in the world, what makes you comfortable in your skin, as I always feel like an outsider. In pākeha culture I’m conservative, coming from a Chinese background, but I’m a weirdo in the Chinese community. I’m looking at how we find ways to fit in.

This comes through in his exploration of martial arts and training in his novels, as a transformation physically, emotionally and mentally — “How you get from one state of mind to another is really interesting to me.”

Regarding his use of colour, it all comes down to practicality. The Dharma Punks was in black and white because in the 90s most cartoonists were photocopying their comics — “We’d exchange tips on which photocopiers in Auckland produced the purest black with no smudge lines” — whereas Shaolin Burning was intended to be sold in bookshops and therefore required a more subtle shades of grey approach. Helen and the Go-Go Ninjas is in colour due to the go-ahead from the publisher, which suited the vibrant and hopeful Helen. Similarly the decision to tailor the story to young adults came from the publishers, who thought it suited a teen audience. Ant and Michael bounced some ideas off each other and Helen became an environmental activist rather than an unhappy wife.

Ant’s next project will be smaller scale, a futuristic dystopia featuring a young character on the run being hunted down by a sinister group. Something to look out for! 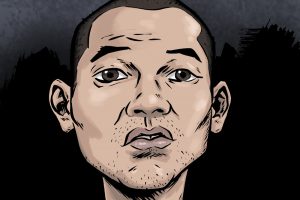 Ant Sang is one of New Zealand’s most acclaimed cartoonists and graphic novelists.

Graphic novels are very popular here across all age groups, as are animated series and films. New Zealand artists compete well in this genre. Can you say why you think the comic strip and cartoon has remained a popular genre?

I think cartoons are naturally appealing to people, from a young age.

And with the breadth of work being produced in the comic form there really is something for everyone; from easy-to-read comics for younger readers, experimental ‘alternative’ comics, Japanese horror and romance manga, superheroes and so much more.

As a kid I read Monster Fun, The Beano and Judge Dredd. What early cartoonists and artists appealed to you as a young person?

I read so many comics when I was young. Asterix, Tintin, Footrot Flats, Beano, Tarzan, Uncle Scrooge, Richie Rich; anything i could get my hands on really!

I enjoyed the clear black and white plates of Shaolin Burning, not to mention the great plot and strong characters. It appeals to those (like me) who don’t like too much text, or are reading graphic novels for the first time.

Was Shaolin Burning your interpretation of a folktale, or a myth of your own creation?

Thanks. Shaolin Burning was a retelling of kung fu myths and Chinese history, interwoven with my own original characters. I really liked the idea of creating characters who were written out of history, but who might have interacted with famous kung fu personalities such as Wing Chun.

Helen and the Go-Go Ninjas is a standout as your first foray in colour comics. How did you make this transition and how did you find it as a medium?

I loved working in colour for Helen and the Go-Go Ninjas. I’ve worked with colour previously in my illustration and comic projects, but never on the scale of this book. To make it visually interesting I wanted to use different colour palettes for different locations and times of day so that there was a sense of a varied landscape and a long passage of time throughout the book.

The Dharma Punks, Shaolin Burning and Helen and the Go-Go Ninjas feature strong female characters. How did you develop Helen’s character?

Helen was created by my co-author Michael Bennett, who originally wrote the story as film script. As we developed the graphic novel, Helen did evolve; for instance in the original script she was married, and a few years older. But at the heart of it, it’s always been a story about a young woman finding herself and her place (or time) in the world.

Not just action-adventure, your comics address strong themes. In Helen we touch on disability, environmental destruction, state control and domestic violence, to name a few. Were these issues part of Michael Bennett’s original script idea, or did they develop as you responded to it?

A lot of these were very much a part of Michael’s script, though we did emphasise the environmental issue as we developed the script into comic form. Originally the collapse of civilisation was more mysterious and wasn’t fully explained, and Helen wasn’t an environmental activist.

These things became clearer as we collaborated on the comic and dug deeper as to Helen’s motivations and character. That’s something I really love about collaborating with other creatives; the process of pushing our work into new and undiscovered directions.

How do you think zine culture and comic strip writing could be better nurtured and preserved in New Zealand?

Do you have any advice tor people planning to run a comic or ‘zine workshop?

I’ve been teaching comics at MIT here in Auckland for the last two years, and I think it’s a good idea to give participants an environment where they can create in a hands-on way. For short workshops, I like to focus on one topic and let participants get into it.

Lastly, we all loved Bro’ Town. Can we hope to see more of your series animated? (Helen and the Go-Go Ninjas would make a great film!)

The Naked Samoans have been busy writing a bro’Town feature script, and I really hope it goes into development. It’d be great to get together with the bro’Town crew again. As for my other projects, I’d love to see them all adapted into films. I’m currently making an animated kung fu short film about the young woman Wing Chun, so that’s a start.