The John Gray who writes on the big questions drew a pretty full house on Sunday. Chairing the session was Tim Hazledine, Economics Professor at the University of Auckland. He got it off to a good start by saying he was going to have a different format for questions at the end. To sort out blusterers, fools, irrelevance and Scotsmen (don’t know why they got a mention but lucky for him that Joyce wasn’t at the session to give him what for), he had a new system whereby any questions would be put on cards and then enveloped and delivered by the two pages so that only sensible coherent questions were asked. Given some of the questions we had heard from the floor at most sessions, this was a good idea.

Is progress an illusion? Gray feels that in some areas – e.g. science and technology – progress is a fact but in areas like ethics, politics and art it’s a myth. he used as an example, what he called “the rehabilitation of torture” whereby it had moved from an absolute and a huge prohibition to the recent use of torture by the world’s largest democracy (waterboarding as a tool by the U.S.) As another example, slavery may have been abolished in the 19th C. but it essentially returned in the 20th under Stalin and Mao.

END_OF_DOCUMENT_TOKEN_TO_BE_REPLACED

The Man Booker winner 2008, Anne Enright, predictably drew a big crowd on Sunday morning and she proved to be an excellent speaker but the speaker and the chairperson didn’t jell particularly and it led to the session being interesting but somewhat frustrating.

The chairing was done by a local based writer, Kapka Kassabova, who was very intense. The role of the other person on stage is to ask the questions and guide the session along. They don’t have to be self effacing but they do have to realise the session is centred primarily on the guest. I am pretty sure it wasn’t an ego thing with Kapka who certainly sounded sincere and interested throughout but she got too caught up with the questions she asked to concentrate enough on the answers!

When Anne Enright was asked what “breaks” the women in her fiction, the answer she got was that we could just as easily ask, what breaks men as Anne E. felt wearied by questions that start “women….” as she is not necessarily putting herself out there as some sort of spokeswoman for the women of Ireland or for women in general. Unfortunately Kapka K. wouldn’t give up on this and kept it going.

END_OF_DOCUMENT_TOKEN_TO_BE_REPLACED

… and not a whimper. It’s all over now, the authors are flying off, many heading to the Sydney Writers Festival.

I took in 3 sessions on Sunday, An hour with Anne Enright, a session with Loretta Napoleoni and John Gray and the grand finale. Standouts of the day:

Books on buses – now this was genius.

So big thanks to my colleagues Richard, Joyce and Philip, and the team back at Christchurch for making this happen, and  to all the authors and book lovers we’ve met. Ka kite ano.

So the festival comes to an end. In Richard’s words “we are knackered, but we made it.”

Hear the Christchurch City Libraries festival team sum up their thoughts on the final day, and on the festival as a whole as they head back to the Garden City. Duration 5 mins 24 secs. Listen on our Festival page, or right here.

Although the carnival is over, the team have lots of nuggets still to post here and publish on the library website, and of course all of our permanent festival content will stay on our festival page.

Joe Bennett stepped more or less straight off a plane from Hong Kong onto the stage at the ASB Theatre. You would never have known it, because he leapt about the stage with a manic energy that kept the sizeable crowd happily entertained for a full hour. It wouldn’t have been out of place at the comedy festival.

Bennett also took the step of encouraging questions from the outset, which was appreciated by those in attendance. Where underpants come from is the story of Joe’s journey to source the origin of a five-pack of man-skin style gruds and a pair of “Authentics” – for “special occasions” back to their origin – the economic powerhouse of China.

END_OF_DOCUMENT_TOKEN_TO_BE_REPLACED

Thomas Kohnstamm caused a bit of controversy when his book Do travel writers go to hell came out. There was a lot of outrage over ‘desk updating’ of travel guides and Kohnstamm’s description of how travel books were written. An article even made the front page of the New Zealand Herald. 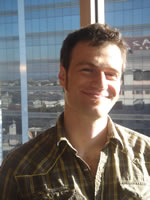 I’m sure that took its toll on him in an I’ll-never-work-again kind of way, but if there’s one quality that screams out from his work it’s that you can’t keep a good man down. Which is just as well – on the way to the airport to catch his plane to New Zealand his car was hit by a “large commercial truck”.

“The car looked pretty much like a cigarette butt,” he laughed, adding something to the effect that hindsight is a great rear view mirror.

Kohnstamm is irrepressible – he has seen some wild and crazy times. Cue predictable comparison to Hunter S. Thompson for his drug-dealing attempts and other, ah, sexploits, but the salutory lesson from reading Kohnstamm is that every choice has its price.

And the price of his travel writing workshop today was a bargain for those that attended. The place was packed – and audiences have been wall-to-wall this weekend – and the book signing queue took about 20minutes to die down. If there are more writers as honest and courageous as Kohnstamm I think the travelling pu blic is better off.

He is now looking forward to the Sydney festival and planning a book about “the joys of illegitimate fatherhood”.

I sat with the team from Palmerston North City Library for this session; it was good to chat with a lively bunch of librarians and erstwhile bloggers. This was a ripper; chair Harry Ricketts observed that Simon Sebag Montefiore and Hermione Lee were pretty much doing all the work – this gave the event a natural flow. The hour was up in no time.

END_OF_DOCUMENT_TOKEN_TO_BE_REPLACED

Joyce and I went to this session featuring Mo Hayder, Joan Druett, Peter Temple and Philippe Claudel with Mike Johnson in the chair.

Philip:It was an interesting session but somehow it didn’t really catch fire, did you think, Joyce?

Joyce: It was a bit flat wasn’t it. Mike Johnson the chair didn’t seem vastly knowledgable about crime fiction and some of his questions were drearily longwinded. His opening gambit was about genre fiction and the perception that genre fiction is somehow inferior to literary fiction. What did you think about what that cheeky minx Joan Druett said?

Philip: You mean the bit where she blamed libraries for categorising fiction into genres? That was a bit rich considering that bookshops do the same and so do publishers in the first place.

Joyce: She better watch herself, don’t dis libraries Joanie. Mo Hayder’s take on the genre issue is that the lines are currently blurred with people like Kate Atkinson and John Banville previously considered to be literary authors moving into crime

END_OF_DOCUMENT_TOKEN_TO_BE_REPLACED

Hermione Lee characterised biography readers as “greedy readers with an insatiable appetite”. Her biography of Edith Wharton at over 800 pages would represent using that analogy a very hearty three course meal. The biography took seven years to research and write and following in the Wharton footsteps involved Lee in travel to Italy, France, England and New York.

Lee accessed Wharton’s diaries, letters, notebooks, unfinished works, her library and annotated books and also made use of Wharton’s two autobiographies. There are however many gaps in the archive, few family letters and very little about her unhappy marriage. As the research progressed Lee felt she grew to like and admire Wharton more and more; her humour, her stoicism and the variety of her tone.

END_OF_DOCUMENT_TOKEN_TO_BE_REPLACED

Quick, droll, self-effacing and effortlessly amusing, Peter Temple delivered the goods in his hour in the sun at the Writers and Readers festival 2008. Originally hailing from South Africa and an Australian since 1980, Temple has a muted South African accent but for those who’ve read his novels he certainly knows how to capture the Australian idiom.

Temple taiked about his experience of working as a reporter and sub-editor in South Africa during the apartheid era. He said it was clear what could and couldn’t be said, the line was drawn. The options were pretty stark, either you accepted the status quo, spoke out and went to jail, or left the country. He ultimately chose to leave but recognised “the extremely brave journalists in South Africa who paid a high price for protest”, he also noted that “for people with no social conscience it was an extremely pleasant life” in South Africa.