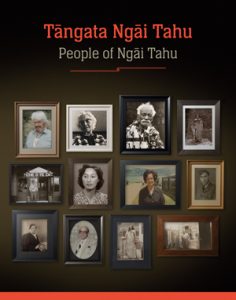 Tāngata Ngāi Tahu: People of Ngāi Tahu. Volume One is a new book celebrating the rich and diverse lives of fifty people of Ngāi Tahu. It was published by Te Rūnanga o Ngāi Tahu and Bridget Williams Books in late 2017, and released to coincide with the twentieth anniversary of the Ngāi Tahu Claims Settlement.

The book emerged from the work of the Ngāi Tahu Archives team on Kā Huru Manu, the amazing Ngāi Tahu digital atlas. While collecting and recording places names around Te Waipounamu, the research team realised they were also discovering the names and stories of people who were the very heart of Ngāi Tahu whakapapa. This book is intended to be the first of a series born out of the work of the atlas, and a second volume is already in process.

The individual biographies in Tāngata Ngāi Tahu cover 200 years of Ngāi Tahu whānau history, producing a ‘tribal family album’ of stories and images. Editor Helen Brown talked about how among the stories of the ordinary, often household names in te iwi, have been revealed the extraordinary lives of so many Ngāi Tahu people.

The book has been arranged by person/name, which Helen said gives a more nuanced history than a book based on themes or a more traditional history book arrangement, perhaps in alphabetical or chronological order. The order of the book does invoke a back-and-forth journey across time, with people from the 1800s to more recent times spread at random throughout the book. The effect embraces serendipity, with a mix of stunning, historical black-and-white photographs between more modern colour images drawing the reader into the rich history within.

Each biography had a limit of 1000 words, and editing to this limit Helen described as often excruciating. “Whole books are needed,” she said. Perhaps for individual whānau this book will plant the seed to pick up the stories and expand on them for their own tīpuna?

The biographies have been written by a team of writers, whose writing experience in this context Helen described as ranging from gathering the purely anecdotal to more academic pursuits. We were lucky to have some of the writers present in the team of speakers at the WORD event, and each speaker featured an individual from the book, giving the audience a summary of their whakapapa and life.

Robyn Walsh talked about her mother Dorothy Te Mahana Walsh of Ngāi Tahu and Ngāti Kahungunu decent, a leader heavily involved in the ‘hui hopping’ during the Waitangi Tribunal Hearings and a keen performer who travelled to San Francisco supporting the Te Māori exhibition. Robyn concluded “we need and must remember these histories and people.”

Others spoken about on the day were Amiria Puhirere – a stunning figure standing in her full-length korowai in the photo on page 86, she was a prominent leader and renowned weaver who lived at Ōnukū on the Akaroa Harbour; Trevor Hapi Howse – a major part of the research team that led the long work for Ngāi Tahu Te Kerēme/the Ngāi Tahu Waitangi Claim and a key figure in the Kā Huru Manu project; and William Te Paro Spencer – a seafaring kaumātua and muttonbirder, described as “proudly and strongly Ngāi Tahu” and “very much a Bluff local but wordly with it”.

As mentioned above, one of the strong features of the book are the photographs, many of which are from iwi archives and other private collections, and often have not been published or displayed outside the embrace of whānau before. It is clear that it is something special these photos are being shared not only with iwi whānui but with the whole country, and such a personal act of whakawhanaungatanga is to be valued and cherished.

Although the prime audience for the book is Ngāi Tahu tāngata there has been huge interest in it since media company The Spinoff published an article about Mere Harper, who helped setup the Plunket organisation. The audience has since become national and international, with a strong focus on the book’s contribution to the historical narrative of Aotearoa.