I’m still recovering, weeks later, from the season 2, final episode, final scene of The Handmaid’s Tale. It had both my husband and I screaming “NO!” at the television.

Not usually a great fan of movies or television made from great books, this depiction of The Handmaid’s Tale was produced with the author of the book being consulted and directing the story arcs and character development and it is one of the best adaptations of a book I’ve watched.

I read this stunning book by one of my all time favourite authors, Margaret Atwood, years ago. It set me on a path to dystopian books with women as the protagonists.  Women throughout history have borne the brunt of societal ignorance, discrimination and violence, either directly or indirectly. In dystopian fiction, there are several great books where women fight against the system, lead the change that is needed to free themselves and those around them or uncover the truths behind a  regime that is hell bent on holding onto power.

I wrote about Gather the Daughters by Jennie Melamed in an earlier blog. It’s a great example of putting women’s stories front and centre. It’s interesting when I put this list together, how much of the control and evil perpetrated on the heroes in these books is around contraception and rights over their own bodies. Here’s a quick list of others well worth checking out:

When she woke by  Hillary Jordan: A fundamentalist right wing agenda is spreading through America, forcing those who commit crimes to be ‘Chromed’ their skin changing colour to fit a particular crime. Hannah finds her skin turned red to punish her for an abortion she had after an affair with a high ranking official. How she finds her way in the world and seeks refuge is at the core of this story.

The Power by Naomi Alderman: What if women suddenly became the stronger more deadly sex, able to inflict pain and even death by just a touch and there was a sudden shift in power? How does this change both society and the women and men in it?

The Book of Joan by Lidia Yuknavitch: In the near future, the earth has become a radioactive battleground and Humans live above the earth on a platform called the CIEL. The character Joan, is reminiscent of Joan of Arc and when she is turned into a martyr by the forces waging war – there are astonishing consequences.

Carhullan Army by Sarah Hall: This is a great story about a woman trying to escape a totalitarian state that enforces contraception and other restrictions on women. Sister has heard of a mythical commune of women who have fled and sets out to join them.

Wool by Hugh Howey: Another devastated world, and this time the few remaining people alive are in many leveled underground silos. Jules is one of the young women living in a silo, it’s all she’s ever known. But her curiosity leads her to discover the truth may be a lot different than what she has been told.

Red Clocks by Leni Zumas: In a small Oregon town, several women are coping with the fallout of strict government rules around contraception, abortion and believing ‘every life is sacred’.  They find themselves thrust together in a modern day witch hunt and a struggle to survive.

I found it interesting how many of these books are American and how many of the new ones seem to be commenting on the present government policies and alluding to the rise of the right wing agenda around women’s rights and the states’ intervention into their lives.

I seem to come back to this topic in my fiction reading time and again. It may seem a little depressing, but the women are strong, determined and more than often triumph and this is why I like the genre.

Like most kids my son enjoys stories before bedtime (which is just as well because his mum is a librarian and he was going to be getting them regardless).

Like a lot of Kiwi parents I do my best to add some te reo Māori into the mix where I can, but my own Māori language knowledge is a bit patchy in places – I’m a work in progress. So how to expose my 4 year old to some te reo, but also read a story so we’ll both understand it and enjoy the experience?

I’ve found that reading te reo Māori versions of books we already know really well in English has been a fun way to do it. It helps if it’s a book that you’ve read so many times, you’ve practically got it memorised. That way you can “read” the English language version (out loud from memory), and then read the te reo version from the page.

Our latest success with this method has been with Stephanie Blake’s Poo Bum aka Paraweta, which has just come out in te reo. 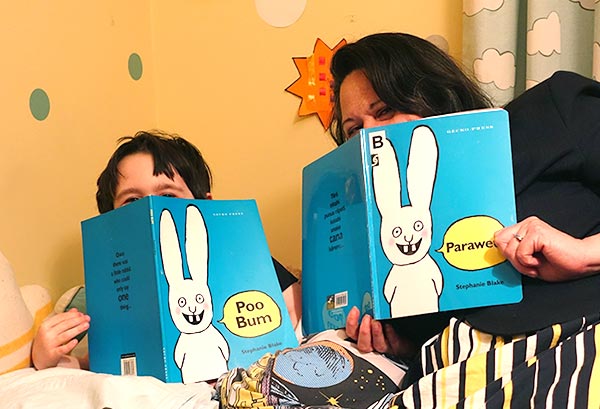 I let my tamaiti hold the original version and turn the pages of that one, while I hold the Māori language version, and he yells out “Paraweta!” at the appropriate points in the story.

Here are some other te reo Māori versions of children’s classics we’ve enjoyed that you might like to try:

If you’re a te reo beginner then start with simple stories like The very hungry caterpillar, Where’s Spot or even Kei te pehea koe? / How do you feel? (which is in both English and Māori and is really easy to follow).

Or try stories in English that incorporate some te reo Māori words like The kuia and the spider (because it’s never to early to learn words like “hōha“), or Row, kiwi, row your boat, which you can sing together and includes simple Māori greetings (and a full te reo version for more confident speakers/singers).

Even if I trip up on a word here and there I’ve found that as long as I’m doing the silly voices and engaging with the story, my son is pretty happy to have a te reo Māori story at bedtime, in fact… Paraweta is his new favourite.

Throughout Te Wiki o te Reo Māori we’ll be blogging about ways you can help strengthen the reo.

In the library collection