My next adventure was waiting for me at The Piano; a port in a storm after The Hunt for Moby-Dick at the Christchurch Art Gallery.

Curiosity is the seed of adventure. For Dr Paula Morris and Tina Makereti it has led to historically sensitive, lyrical works of fiction based on both fact and social myth.

Paula (Ngāti Wai) is the author of Rangatira, winner of the 2012 NZ Post Book Awards and Nga Kupu Maori Book Awards. False River is her new collection of short stories; topical as Dr Morris will be the Pacific Region Judge for the 2018 Commonwealth Short Story Prize.

Well-travelled, Paula teaches creative writing at the University of Auckland and has appeared at festivals and conferences worldwide. She is the founder of The Academy of New Zealand Literature.

Introduced by Nic Low (Ngāti Tuahiri), our two curious writers treated the audience at the Heartland Chamber to readings from their works.

Paula read from both Rangatira, and False River, Tina from her new book, The Imaginary Lives of James Poneke, for an audience full of writers, if question time was anything to go by.

False River is an unusual collection of contemporary stories in that some are fiction and some are non-fiction; blurring the lines between story and fact. This can be said of historical fiction also; where it may only be possible to imagine the world of our ancestors, based on myth or archaeological evidence.

Tina Makereti (Ngāti Tūwharetoa, Te Ati Awa, Ngāti Rangatahi), also a PhD and winner of the New Zealand Manhire Prize for Creative Science Writing (2009) to name just one of her accolades, is the author of Where the Rekohu Bone Sings, a lilting and moving tale of cultural conflict, place and belonging told through characters that are between Moriori, Maori and Pakeha cultures.

In Tina’s experience, fiction based on a real person involves letting go of reality. The historical figure is a flat image to be turned into narrative.

Something like performing your identity on stage? asks Nic. There’s a pause as Tina contemplates this. Exactly that!

For me it’s more playing the New Zealander, having to say, “Fush and Chups.” But the character of James Poneke (in The Imaginary Lives) realizes that in ‘dancing’ for the Europeans (letting them exhibit him), he has been complicit in perpetuating their sense of ‘other.’ 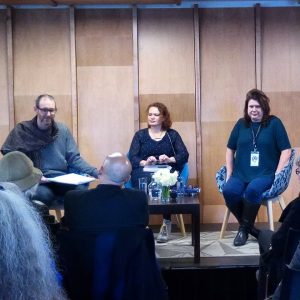 Tina : Just do it. Tell your own story, get it out in the world. There’s no guarantee but there is no one else to tell it. So much remains to be written.

Paula : We must do all we can. You can’t complain the field (of writers) is sparse if you haven’t sewn the seeds. Write the book you want to write : engage with language and tell your experience, your world view.

Lastly Nic asked how the two authors found material for their books; did they ‘plonk’ elements of their lives into their stories?

Tina : I prefer to call it artfully interwoven.

Paula actively purloins anecdotes and overheard scenes from her daily experience, using them to create scenes or characters.

Nic : “Your friends have to be careful”

Paula : “My enemies have to be more careful”