Welcomed with a mihi by Corban Te Aika from Ngai Tāhu, we were then invited to fill our boots with adventure by WORD Christchurch literary director Rachael King,  the tone was suitably set for our WORD Christchurch Festival journey, beginning with an author who embodies the spirit of adventure: Robyn Davidson.

In 1977 Robyn trekked across the Australian desert with four camels and a dog for company; becoming world famous at the age of twenty-seven. The articles she wrote of her experience, for National Geographic, and The Times, formed the basis of her first book, Tracks. Robyn’s incredible story of survival in the desert remains a best seller, and was made into a film in 2013. 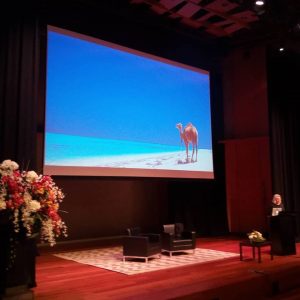 In the sold-out Philip Carter Family Concert Hall at The Piano, Robyn relived her 1700 km journey for an enthralled audience, accompanied by images by Rick Smolan.

Rick was sent by National Geographic to chronicle her adventures, meeting her three times during the nine month journey. The collaboration was uneasy at first. Although she needed the sponsorship, Robyn wasn’t keen to stage pictures re-enacting the story for a magazine audience, and she wasn’t willing to share her time alone in the desert.

Robyn felt “objectified” by the constant clicking, her depiction in the shots as a ‘Vogue model” and became increasingly aware that Rick was falling in love with her.

Raised on a cattle farm in Queensland, Davidson had a natural affinity with animals and later studied zoology. She spent two years working with camels before she felt ready to take on the unforgiving Australian desert.

Davidson practiced trekking with an Aboriginal guide, learning how to find water. She became interested in nomadic peoples, becoming something of an advocate for aboriginal land rights. The interest around the Tracks story led to a career as an explorer and writer.

Robyn conveyed some great messages to the crowd, empowering us with the idea that if a twenty seven year old Robyn, who was “terrified of everything’ could cross the desert, then “anyone can do anything.” She spoke of how we need to push through the boundaries of family, society and our own inner voices to command our own fate – to find a “better, larger way of being.”

The experience changed Robyn. When alone in the “singing desert” (i.e. not hounded by tourists and photographers) Robyn felt a sense of connectedness with everything.

“When all is connected, the boundary of the self expands.”

Therefore Robyn didn’t really feel alone in the wilderness, except when faced with life-threatening challenges such as an empty well or runaway camels. Even in the face of certain death, Robyn’s stoic sense of bravery came to the fore:

“I might have died, but we’re all gonna do that anyway.”

A master of understatement!

Robyn later joined Indian nomads on migration in 1990-2, publishing this experience in Desert Places, and writing another collection including Tibetan nomads No fixed address.

Travelling Light, published in 1993 covers a decade of doing without “life’s little props,” including a trek across the U.S.A. on a Harley Davidson. Way to go!