You can become part of Christchurch’s own River of Words.

River of Words is a ten metre wide installation in the South Quad of the Arts Centre, part of the House of Travel Botanic D’Lights (6pm to 9pm from Wednesday 8 August to Sunday 12 August). It is an interactive animation featuring a flow of words in six languages, and representing the changing nature of the people of Christchurch. Your shadow becomes a space for animations related to the words. We dived into the river last night, and had a ball – moving around, shining torches, and becoming part of the art.

River of Words has been developed by artist John Maillard from Ara (Programme leader, Photography), installed by Spectrum Lighting, and supported by Enliven Places Programme at the Christchurch City Council. 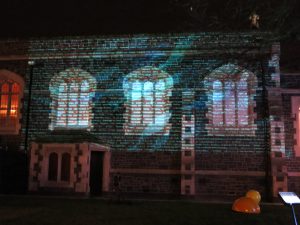 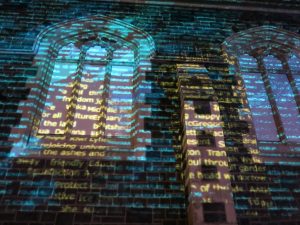 Making the River of Words

John had the idea for the river of words, and put out a call on social media for people to share their words representing Christchurch:

Making the most of the expertise at Ara, John worked with Te Puna Wānaka Māori and Pasifika – Ara who suggested appropriate Māori words.

Once he had the words and kupu, John explored game design and technology to see how it might work. The project started out as a mystery technically, but due to working with colleagues and experts like Spectrum Lighting, his knowledge grew exponentially. Using the programme Isadora (known for its use in theatre lighting and effects), vector animation, and security cameras, he came to a technical solution that brings his vision to life:

Christchurch has been through many painful experiences in the last few years, both personal to the people, who are the city’s lifeblood and to the buildings and roads that make up the city.
Even though the infrastructure of the city was damaged, the people of Christchurch have moved and flowed through its changes adapting and embracing its reinvention, though the process has been slow and stressful.

The inhabitants of this city are part of a human river, are always moving and flowing in this, our city. Each person is a part of the changes to the landscape of the city, and we are all linked by the words that we share about the city. These words bond us together. I have asked for people in the city, my friends and neighbours to lend me words that represent Christchurch, the people the cultures and the languages of the city. The words in the river represent the ever-flowing people in our city. The words within each person represent their humanity and resilience as we navigate through our lives in this city.

John says “I think people truly love Christchurch”. He’s right, and going into the River of Words feels like a warm embrace of Ōtautahi.

Creating this work is his way of giving something back to the community. It’s the antithesis of art as a commodity – this is art that can’t be bought. It is art for everyone to experience and enjoy.

River of Words – The Future 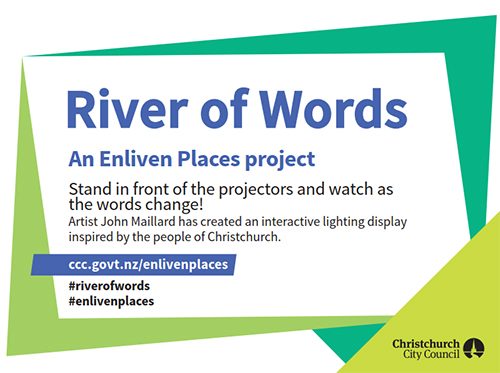 River of Words will carry on as a legacy piece from the House of Travel Botanic D’Lights. This 18 metre wide version will be installed for six months at 110 Cashel Street, and projected on to the vacant wall of 112 Cashel Street. This project is part of the Enliven Places programme, completed in partnership with the events team and Ara with the aim of enhancing the night time experience in Christchurch through innovative lighting.

One of the interesting aspects of River of Words is its adaptability. In September, it will be themed around Te Wiki o Te Reo Māori – Māori Language Week.

John Maillard has exhibited in galleries around New Zealand and the United Kingdom for over three decades. John has specialised in documenting people and landscapes. For the past sixteen years John has been studying New Zealand landscapes and in particular the culture of rural New Zealand, assembling a body of work which will reflect his love for this country.

He has published or collaborated in four books on native plants, New Zealand landscapes and cultural history. John is working on a new book documenting the location of native habitat for migrating birds from the Alps to the ocean with Canterbury University Press.

John has worked as a photographer in many countries around the world, notably, Gambia and west Africa, the United States and Europe.

A brief history of Botanic D’Lights

Light up the Leafy Night was an event run in July 2013 as part of the 150th birthday of the Christchurch Botanic Gardens.The gardens were lit up for 8 nights with installations and performances.

In July 2015, The Press Night of D’light in the Botanic Gardens took place (also part of KidsFest). It expanded in August 2016, and became Botanic D’Lights.

In July 2015, it began as The Press Night of D’light in the Botanic Gardens – part of KidsFest. It expanded in August 2016, and became Botanic D’Lights.

In 2018, the House of Travel Botanic D’Lights is bigger and better – and it’s on in both the Christchurch Botanic Gardens and the Arts Centre of Christchurch.

Come and visit – Wednesday 8 August to Sunday 12 August, between 6 to 9pm each night, with recommended last entry at 8.30pm. Prepare to be stunned! Here’s a sampling of what you will see: 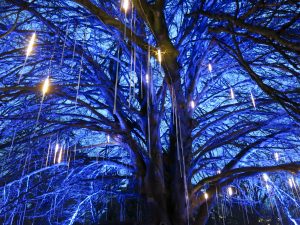 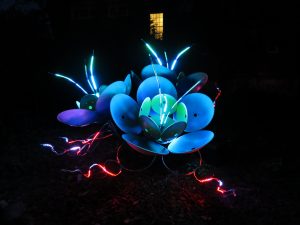 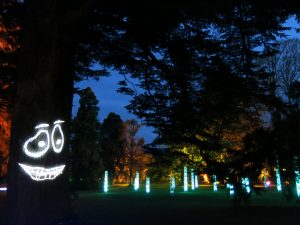 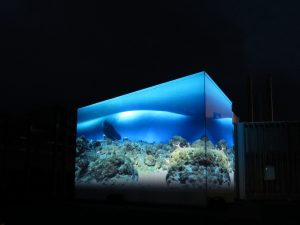 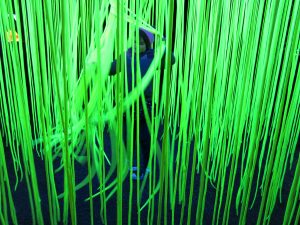 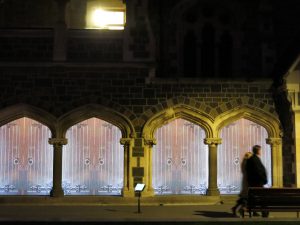