“Equipped with his five senses, man explores the universe around him and calls the adventure ‘science.’” – Edwin Powell Hubble

Famed astronomer Hubble articulated simply what great science teachers have always known:  science is based on exploration, interaction, and engagement. When students connect with concepts in a meaningful, tactile way, they learn in a more meaningful way.

That belief is the foundation of Gale Interactive: Science, a new resource with interactive 3-D models and authoritative, digital content that helps students experience science, not just study it.

Designed to supplement science course materials in a fresh, unprecedented way, the resource is brimming with relevant images that can be rotated, magnified, and closely examined to enhance experiential learning.  Students can explore on their own to assist with homework and research assignments, or teachers can use the online resource in the classroom to demonstrate concepts and expand discussion. Content supports the study of biology, chemistry, and earth sciences – making it an ideal resource for high school students. 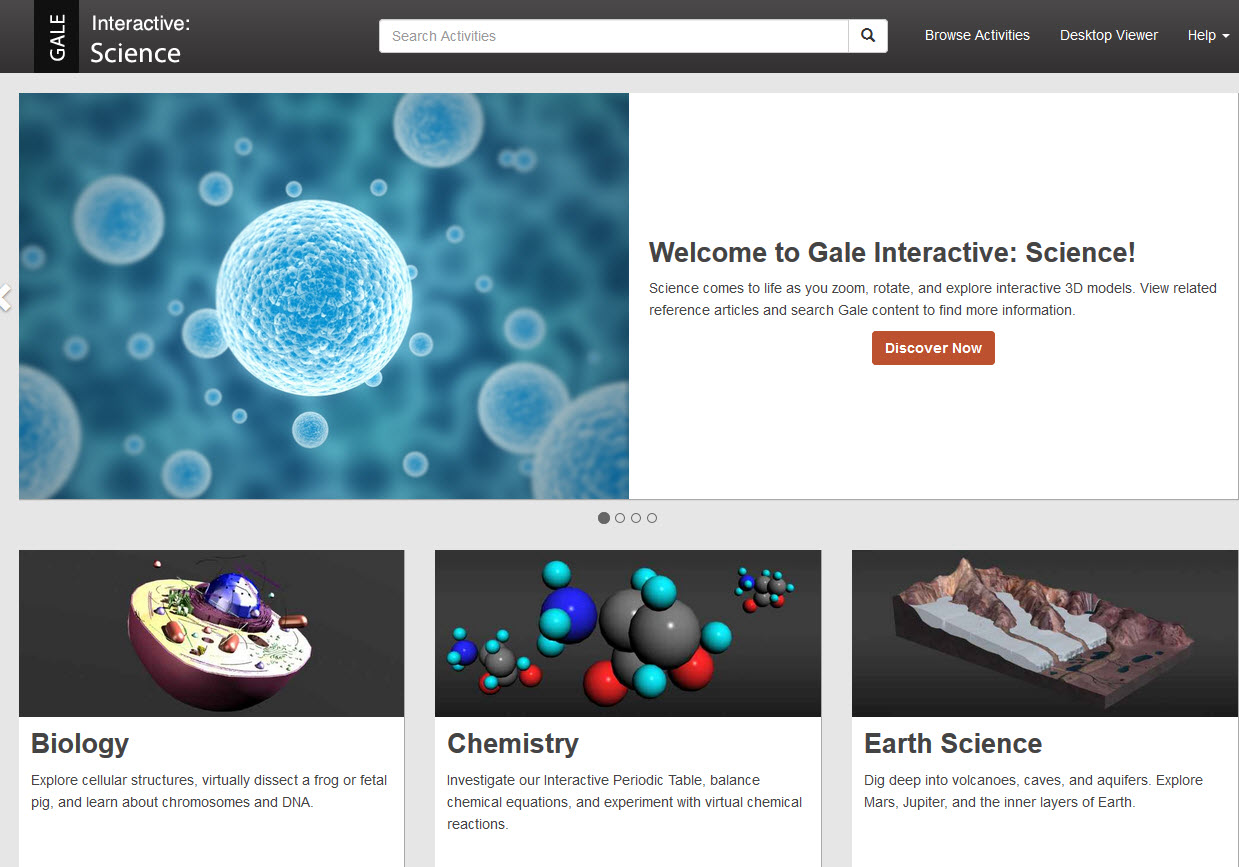 For example, when studying insects, students can find images of specific insect types which can be manipulated to allow different views.  It’s like examining each bug in person – but possibly even more useful, as unique features can be explored by zooming in. And with different resources available, such imagery as cross-sections and other scientific views are available to support in-depth investigation.

The Gale Interactive series all features special content and functionality that support learning, such as:

With eResources like these, science will become a fun, exciting subject. Gale Interactive takes the struggle out of science and it is at your fingertips 24/7. Take it for a test drive and see for yourself at:

Find more information about these products:

Have a look back at our April Holiday Programmes in the Learning Centres:
‘Lego Animation’ is always a good way to kick start the holidays! We had our young movie buffs directing and producing their own short animated movies over at Te Hāpua: Halwell Centre.

At Upper Riccarton, it was all about “reduce, reuse and recycle” with our new Earth Smart programme. The children loved the activity with the miniature recycling bins.

Here at South Learning Centre, the kids had fun completing challenges using the MBots in ‘Robofun’.

Kids at South also delved into 3D printing. Their challenge was to create their own desk organisers.

Everyone loves to receive positive feedback and we did for our ‘Chill Out Tunes’ programme in New Brighton.

“I’d like to provide glowing feedback. She loved it, learned a lot, and is excited and abuzz about the programme. As a parent, I loved that I got to hear the music she’d made, and got the music emailed to me. She also had a poster of herself as David Bowie, and a CD with a cover she’d made herself.  Big thanks and Kia ora to everyone involved”.

So, if you didn’t get a chance to pop in and see what was happening, then make sure to check out the ones coming up in July.  We have a few new goodies in there! So, watch this space (new holiday programmes will go live on Friday 1 June).

Long before I was born, my dad worked briefly for a firm of a stamp auctioneers in London. Apparently he helped, in some small way, to sell King Farouk of Egypt‘s stamp collection! He had a small collection of his own and he used to take me to stamp fairs, mostly I think to catch up with old friends. For me, it wasn’t so much the stamps I found appealing as the people who collected them, who seemed an unusually obsessive bunch with their own arcane rules, jargon, and preoccupations that appeared baffling from the outside.

I was therefore delighted to discover, in the Library’s catalogue, a book called “The One-Cent Magenta: Inside the Quest to Own the Most Valuable Stamp in the World” by James Barron, which is full of stories of people like those I remember.

This book tells the extraordinary tale of a single stamp, the only one of its kind, as it changed hands and rapidly increased in value with each new owner over it’s 150 year history. (The title of each chapter reflects the stamp’s value at that point in the story.)

The stamp in question is really just a tiny scrap of coloured paper bearing an almost indiscernible design. It was printed quickly in what was then British Guiana (now Guyana) to replace some stamps that had gone missing on their way from London. As stamps of this value (unlike the more common four-cent stamp that was also printed at the time) were mostly used for newspapers and magazines, almost all of the them were thrown away when they were finished with, but miraculously a single stamp survived and was rediscovered some years later in 1873 by a 12 year-old boy among papers in his uncle’s house.

After a number of changes of ownership, that stamp eventually sold at auction in 2014 for the astonishing sum of US$9.5 million (about NZ$13.5 million) – more than a billion times it’s original value! At just 2.5cm x 3.2 cm that means each square millimetre is worth nearly NZ$170, making it the world’s most valuable object for its size and weight.

The reasons why someone would pay such an inordinate sum of money for something with no real material value, and why some very rich people find extreme rarity of this kind so irresistible, is the central question explored in this book. It would be tempting to consider these people crazy, but they all made excellent returns on their investments, and future owners will continue to do so as long as the stamp remains so highly sought after.

The book is a real page-turner, and there are lots of astonishing tales along the way about the people involved, such as the man who tried (unsuccessfully) to use the stamp as a bargaining chip to get out of a murder charge, or another who may (or may not – no one really knows) have found a second one cent-magenta and destroyed it to maintain the value of the first. These stories may sound incredible, but in the bizarre world of high-value stamp collecting this sort of behaviour is not out of the question.

This book reminded me of the 1936 novel “Antigua, Penny, Puce” by Robert Graves, about a brother and sister who fall out in spectacular fashion over a dispute concerning the ownership of a rare stamp with many similarities to the one-cent magenta, which is well worth reading too if you find this sort of thing as fascinating as I do. The Library doesn’t have a copy, but as it’s out of copyright, it is available as an e-book from the Internet Archive, where you can also find the audio of a 1995 BBC Radio dramatic adaptation of the book.