Start championing the environment. Become an Eco Champ –  here’s how:

This year’s Primary Science Week (14-18 May) is where the action is. Have a look to see how you can take part.

Take a look at our Science Fairs page and books for more information on getting scientrific!

So why not pick a project you want to champion and get stuck in cleaning up the environment? Why not start a worm farm or compost heap at school for all those apple cores from your lunch boxes then use all that lovely compost to start a school vegetable garden? Be part of Sustainable Christchurch at home, in school or out in the community.

Become an environmentally friendly school with the help of Enviroschools and see what’s growing near you by visiting a community garden.

Learn how to grow your own food in school and start a school garden. There are lots of resources to help take a look at:

Clean up rubbish at your school beach or local park or start a recycling scheme at your school or find out more about soft plastics recycling  Check out information on tackling litter and resources for school  from  Keep New Zealand beautiful. Check out how the Recycling plant (Material Recovery Facility) works and how to recycle right with these videos:

Find out all about recycling  and the 4R’s Reduce Reuse Recycle and Rebuy in these resources:

Learn about what pests visit your school or park by making a tracking tunnel and chew cards. Find out how you can remove them from your school and community from Predator Free New Zealand.

Become a weedbuster by cleaning up a local beach piece of bush or participate in the restoration of a local stream. Take a look at what to plant streamside in this handy booklet on what to plant produced by Christchurch City Council.

Does your school already do a lot? Then share what you have done by making a poster, infographic, display or video.

Tell us what you are doing for National Primary Science Week. We’d love to hear.

He’s the author of the Diary of a Wimpy Kid series, creator of Poptropica, and thanks to WORD Christchurch I got to see him speak on Wednesday. 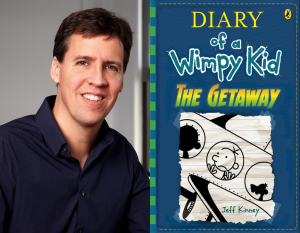 The auditorium was packed full of excited kids and parents. We were all waiting for 6 o’clock to finally arrive and the star to walk out on stage, I looked around at the demographics represented. It was wonderful seeing kids of all ages present – most clutching well-worn copies of Diary of a Wimpy Kid books. I’m sure one kid was carrying the whole series, his stack of books was almost too big to carry. Several kids got up to boogie along to the pumped vibe music – it was just too exciting to keep still.

Finally Jeff Kinney himself walked on stage – oh my gosh, one of the coolest authors for kids was actually within throwing distance!

If you want to get your kid into reading, introduce them to Diary of a Wimpy kid. You won’t regret it.

“Comics can also be literature” he said.

Remember that, pictures and the meaning they bring are so important. His books have his cartoons dispersed throughout the text. He describes this as “little islands to swim to,” which is why these books are so great for all levels of readers.

Encourage your kid to read comics, if that’s what they like.

Jeff’s iPad was hooked up to the big screens, so we could see him draw in action. He taught us how to draw his main characters, and showed us how a slight difference in line can make the character have a completely different emotion.

Have a go! Then try do it blindfolded. He had a couple of volunteers up on stage drawing with him, with hilarious results.

It all ended too quickly, and I can’t wait till I get to see him speak again.

*scurries off to read Diary of a Wimpy kid again*

Another great writer for kids coming to town …

Heads up! Andy Griffiths and Terry Denton (the Treehouse series guys) are coming to New Zealand! The Christchurch show is sold out – but there’s still space in the Dunedin one!