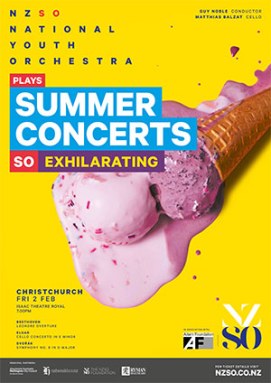 The NZSO National Youth Orchestra are performing next month at the Isaac Theatre Royal as part of their summer concerts series. The orchestra is made up of mostly university students and the standard of musicianship is high. Teenage prodigy Matthias Balzat (who has been playing cello since the age of three) will perform under the baton of conductor Guy Noble.

The pieces performed will be:

We have 2 double passes to give away to library members. All you need to do is tell us your favourite New Zealand songwriter or composer and complete the competition entry form. Entries close at 5pm on Thursday, 25 January and winners will be announced on Friday 26 January.