The Doll Master is the latest offering from Joyce Carol Oates (aged 79!).  And she’s as fresh as ever.

Highly recommended by Gillian Flynn, The Doll Master is a riveting collection of thrillingly sinister stories from the dark side of life. 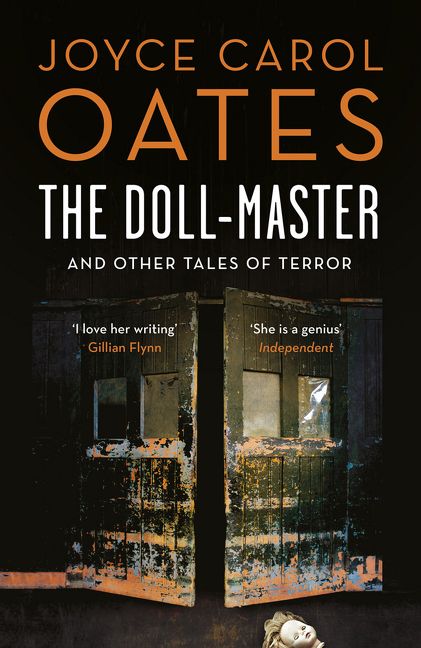 All is not as it appears. Each protagonist has a secret. Each story has a twist.

In the title story, a boy collects dolls after the death of his cousin. But as he collects more, it becomes apparent that his obsession is unhealthy. What does it have to do with a series of child abductions? And who is the ‘friend’ that urges him on?

‘Soldier’ plays with our sympathies while looking at the sides taken after a mixed race (accidental?) shooting. Receiving death threats from some, yet heralded for bravery by others, Brendan Shrank maintains his innocence. But why did he pick up his Uncle’s gun that day?

‘Gun Accident’ takes a fine-toothed comb to a shocking home invasion, in which a young man is shot. But what secret does Hanna hold? Why has she never spoken about what really happened that night? Why is she paralysed with anxiety when she revisits the scene, twenty years later?

‘Equatorial’ had me thinking of Vonnegut‘s Galapagos. I just couldn’t get him out of my head. But it fits, in this whacky story of a woman convinced that her husband is trying to kill her. Is it all in her (pounding) head? Oates draws parallels between the lengths will they be driven to and the fight for ultimate survival. Only the fittest will prevail…

‘Big Momma’ addresses the problems of working single parents, poverty, runaways, body image and abduction (but boy with a twist!). Where is the Clovis’ mother? And who or what is Big Momma?

I love the fluent and easy way Joyce Carol Oates writes, the (conspiratorial) asides she whispers in brackets to the voyeuristic reader. Oates wields a lovely turn of phrase;

A single high window overlooks, at a little distance, the rough waters of the Atlantic that appear in the moonlight like shaken foil.

She avoids bad language, (barring ‘Gun Accident’) and is not wordy, except in the more literary Edgar Allen Poe influenced ‘Mystery Inc.’ In this Who’s Who of mystery writers, invoking The Man Who Loved Books Too Much, Oates narration becomes more classically sinister; her protagonist a predatory bookseller, intent on adding to his empire by foul means.But again, a twist: “Charles” entertains the idea of being partners with his mark, Aaron Neuhaus. Will he change his murderous mind? Or has Neuhaus become suspicious?

The six stories in The Doll Master are a good length, almost novellas. Although I’m not a mystery reader, I was riveted to each twisted little tale, and couldn’t put this book down.

I had to find out what would happen… Did he, or didn’t he? Will she or won’t she? Is it HIM?

Read on if you DARE!

The Doll-master and other tales of terror
by Joyce Carol Oates
Published by HarperCollins New Zealand
ISBN:  9781784971038