“History is written by the winners”

This quote is attributed to either Churchill or perhaps Hermann Göring (the jury is still out!) and it’s pretty accurate – if yours is the only side of the story people hear, then its probably going to be the one that everybody believes. But the not-so-recent rise of fictional accounts of real historical events and significant historical figures has been trying to even the ledger by giving us the other side of the coin!

And we’ve had LOADS of writers contributing to this movement; think Hodd by Adam Thorpe – depicting Robin Hood as an outlaw, a thief, and generally a really bad man; or The Roving Party by Rohan Wilson – exposing John Batman as a scoundrel and murderer with his attempts to control (and/or massacre) the indigenous population of Van Diemen’s Land (Tasmania) and Victoria; and Wolf Hall by Hilary Mantel – the courts of King Henry VIII from Cromwell’s view-point.

Each of these stories seeks to expose the “truth” or at least broader context of historical events in whatever form that can take since so long a time has passed…And now there’s a new title to add! In his new book Fletcher of the Bounty, Graeme Lay recounts the story of the mutiny on the Bounty with Fletcher Christian as the central character. 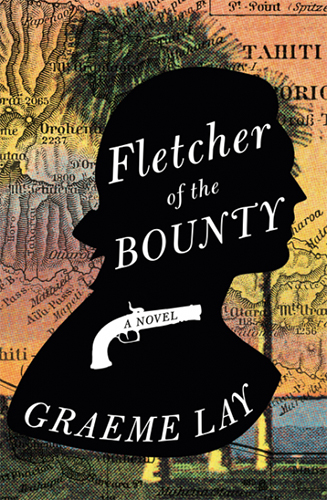 Lay’s skilled storytelling builds a world of contrast, between the confines of life on board a naval vessel adhering to authority and routine, to the freedom and love of life experienced during the time spent in Tahiti, connecting with people from another world and ultimately falling in love with an indigenous girl. He also describes well the slow unravelling of the ship’s commander William Bligh, and demonstrates just how alien he must have seemed while in Tahiti – clinging desperately onto his military ceremonies and brutal disciplines (continuing to wear full dress uniform in the sweltering heat, for example), while at the same time considering himself far superior to all others, crew and islanders both.

The story of the Bounty, one of idealism, betrayal and the resulting struggle to create a Utopian ideal, is familiar to all of us and as far as rewriting the story of the Bounty, the relationship breakdown between Bligh and Christian, and the inevitable mutiny, Lay doesn’t really push any boundaries beyond what we already know. It’s a well written sea-tale/love-story, and it does expand brilliantly on many of the themes dealt with in brief in the 1984 Roger Donaldson film The Bounty, (with the two leading characters played by the greats Mel Gibson and Anthony Hopkins).

His compelling character-driven narrative is highly descriptive and contextual and if you like a good nautical tale or are a fan of historical fiction then you should get a kick out of this retelling of the tale – I especially like the inclusion of regional languages as the crew travel around the Antipodes. Just don’t expect any new earth-shattering nuggets of insight.

Fletcher of the Bounty
by Graeme Lay
Published by HarperCollins New Zealand
ISBN: 9781775541066

And while we’re talking about stories in this vein, here’s a list of other titles that fall under the banner of Hard-Hitting Historical Fiction, explore, read, and enjoy!