James Gleick does not want to offend anyone.

The author of numerous books of a scientific bent is careful with his words and keen not to ruffle any feathers. It’s speculation on my part, but I wonder if his experience is that, on the topic of Time Travel, passions might sometimes become inflamed?

A curious full house gather at the Piano for this WORD Christchurch session featuring Gleick and fellow New Yorker Daniel Bernardi (erskine fellow, film and media studies scholar, science fiction expert and documentary filmmaker). They discuss the ins and outs, twists, turns and paradoxes of Time Travel. Before long there is, as is the new tradition when two educated Americans speak in the presence of non-Americans… a jocular swipe at the current US president.

Fortunately this science-loving audience is not in the least offended by the joke.

Gleick’s book Time Travel: A history is an exploration of the literature, science and zeitgeist of Time Travel. It’s far-ranging, smart and brain-expanding.

But what made him want to write on that topic in the first place?

I discovered this weird fact – that Time Travel is a new idea. That didn’t make any sense to me.

Why did it take until H. G. Wells’s novel The Time Machine for people to explore that as an idea? It seems a few things came together: photography and cinema were showing people a slice of the past in the present; instantaneous communication was suddenly possible making the lack of temporal alignment in different places more obvious; and time standards became a thing for the first time. As Gleick puts it, “the way people thought about Time was up for grabs”.

Then Einstein came along and things got really interesting.

Though Einstein’s theories allowed for the possibility of a sort of Time Travel, Gleick is quick to point out that it’s not the punching-a-date-on-a-machine or opening-a-portal-to-another-era kind. It’s really just the acknowledgement that there is no universal time. Everyone’s experience of time is personal and given the right set of circumstances (speedlight travel, for instance) your version of time can slow down relative to everyone else’s. This means that the Time Travel stories of the “Rip Van Winkle” (or Futurama) kind become technically possible. But Gleick doesn’t believe the imaginary, sci-fi type Time Travel that continues to excite our imaginations exists, or that it will. Though he seems apologetic about it, as if he’s mindful of deflating the aspirations of wannabe Time Travellers in the audience.

On the enduring appeal of Time Travel in literature and popular culture, Gleick feels that it lets people explore many things about families and relationships – it gives you the ability for “a do-over”. Like the movie Groundhog Day. He points out that a lot of Time Travel stories are about fathers and mothers, families and parents.

Take Back to the Future – isn’t this really just a movie about looking at your parents and realising they were once young like me, and wondering “what was that like?”

This is far from the only reference to Time Travel in popular culture, and many in the audience probably come away from this talk with a reading/watching list that includes:

Gleick is at great pains to try and describe these stories in a way that does not reveal any important plot twists. In the case of Planet of the Apes this is… is adorable the right word? The movie came out in 1968. But no spoilers!

Another appealing aspect to Time Travel is that it’s a way of escaping death. After all, (spoiler alert!) Time will kill us all in the end.

But what is Time (other than universally deadly)? Scientists may tell you that Time is the 4th dimension and that it’s similar to the other physical dimensions in that we inhabit one spot and the rest stretches out away from us, both backward and forward. This rather flies in the face of what Gleick says we know “in our guts” about Time i.e. that the past has happened and the future hasn’t.

It seems an oddly obvious statement to have to make, and Gleick says it’s not a scientific one but a religious one.

Some of the audience questions delve into this idea of religious thought versus Time Travel and at this point I get lost, draw a spiral in my notebook and label it “loop of confusion”. Questions like “is God in Time with us?” and “doesn’t an interventionist God imply that the future isn’t set?” do somewhat “screw my noodle”. Given the heady topic, it seems inevitable that I lose the thread of the discussion at some point in proceedings. Perhaps it always has, and always did happen?

Other questions posed include one from my colleague Fee (who wrote her own post about James Gleick) and wonders if the future is set, then what about premonition? Which Gleick says (gently) that he does not believe in, though it’s a powerful idea.

Another question asks how it is that Gleick can explain such scientifically complex stuff in ways that non-scientist folk can understand. He says simply that he’s a journalist so he asks lots of questions and that a big part of it is just getting scientists to talk you as they sometimes “live in their own abstruse world”.

I am lucky enough to get the last mic grab of the night and ask my own question (which if I could have a Time Travel do-over for, I would make slightly less waffley). It’s with reference to the way we think about Time in terms of spatial metaphor. In the Western world we conceive of the past as being behind us and the future in front of us but in Māori culture this is flipped around – the past is known and therefore visible before you and it’s the future that approaches you from behind. In the course of researching had he found any other cultures that view Time this way? Gleick replies that the language we use, the words that we use to describe Time really shape how we think about it and that in some Asian languages Time travels on an “up and down” axis or “right to left”.

And if I thought my noodle was screwed before it definitely is now. As I exit the theatre along with the rest of the audience I concentrate on travelling forward through space and backwards/forwards/vertically through time. 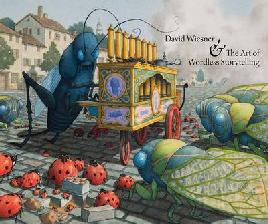 David Wiesner And The Art Of Wordless Storytelling
This is definitely a book for someone who has an interest in children’s illustration as it contains well-researched and far-reaching essays on the history and development of book illustration as an art form.

David Wiesner is of course the focus, and I enjoyed revisiting his wonderful illustrations. I remember sharing these books with my children, all of us having varying viewpoints about what was happening, delving deeper into each illustration with each reading. This is a beautifully produced book. 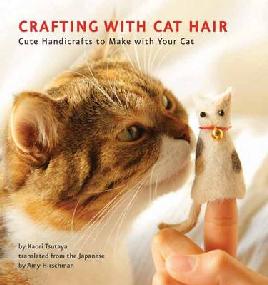 From the sublime to the ridiculous! Crafting with Cat Hair is the sort of book you just have to have a look at because it is so unlikely. Taking itself completely seriously, this book gives you in-depth instructions on how to use your moggie’s fluff for felting crafting pleasure.  Perhaps if you are so inclined, it could be a way to immortalise your feline friend.

Food Fights and Culture Wars
Chomping away on my couple of pieces of dark chocolate, it was interesting to read about the violent past of chocolate. The chocolate we eat today is barely recognisable as the cacao that was produced by the early Mayan people.

Cadbury (whose Dunedin factory is set to close next year) was founded by Quakers. Their desire to fend off slavery underpinned the chocolate trade. Filled with beautifully reproduced pictures from the British Library, this is a fascinating romp through history and food.