For a story with a lot of loud sound effects, David Walliams latest literary romp The Midnight Gang seems to have quietly tiptoed into publication, with this children’s chapter book sneaking up just in time for Christmas.

Shhhh! Here we are on the 44th floor of the Lord Funt Hospital in the Children’s Ward. Be quiet, it’s bedtime. This is not so much a home for peculiar children as it is for physically-impaired children. There’s a big cast of characters to get to know…some actually in casts! Meet 13-year old… Tommy? Tommy! (even he wasn’t sure of his own name after a bad knock on the head from a cricket ball), who finds himself stuck in the ward with his new and equally recovering friends like young Sally (bald from her ‘treatment’), wheelchair-bound Amber, tonsil-free George and temporarily blind Robin. They are overseen by a matron who despite running a children’s ward hates children, a young doctor who can’t stand the sight of blood and support staff that includes an unsightly Porter, Mr. Dead Squirrel on his Head, Mrs. Google-Eyes and Professor Comb-over, all delightfully illustrated by the illustrious Tony Ross.

But surely hospital has to be better than the boarding school his absent parents practically abandoned him at? It wasn’t less miserable for long! The hospital matron and his school headmaster are soulmates it seems. Lunch was awful offal… and boiled eel, roasted badger, pigeon soup, boiled cabbage and toads on toast – hilariously pictured. And in what might be a reference to Walliams’ own The Boy in the Dress, Tommy suffers his worse humiliation ever when the matron makes him wear a Pink-Frilly-Nightdress to bed. Midnight is the time when all children are meant to be fast asleep, except for the secret Midnight Gang! That is the time when their adventures are just beginning… Cue 12 chimes and we all know what happens in children’s stories at the stroke of midnight – magical and dangerous things of course.

“…the Midnight Gang is nothing more than an idea really,” mused Robin. “One that’s passed on from child to child.”
“Like nits?” asked George unhelpfully.
“Yes, exactly like nits, George!”

Their ‘idea’ and secret aim is to bring children’s dreams to life. So it’s a shame Tommy can’t think of a dream he might have that’s worthy of coming true. And with their collective impediments, how can they possibly achieve their dreams? And who is the real leader of this gang anyway? George’s dream to fly goes awry in the gang’s biggest adventure and challenge thus far. First they have to work out how many balloons it takes to lift an elephant (97,282 apparently). And can you imagine a naked 99 year-old flying over the rooftops of London? You don’t have to, that’s in here too.

Walliams is the Dr. of Fun and even his fonts are having a good time – the louder it gets, the bigger the type. There’s plenty of indirect messages broadcast here too: Don’t judge someone by their looks, life is precious and oh, it’s no big deal that girls can marry girls. When Sally’s condition takes a turn for the worse her dream “to live a big, beautiful life” inspires them all, leading Tommy to finally find himself by caring about others. 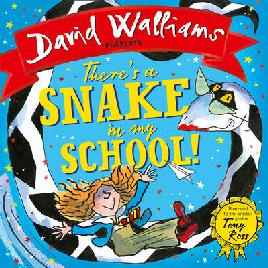 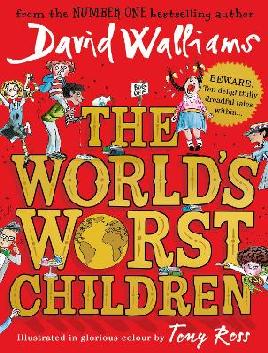 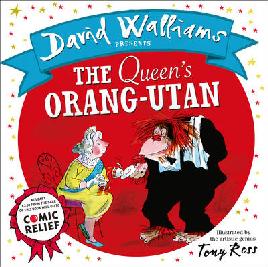 Walliams, of Little Britain fame, turned his comedic talents to children’s novels including Mr. Stink, Awful Auntie, Grandpa’s Great Escape, Gangsta Granny, Demon Dentist, Billionaire Boy, The Boy in The Dress, Ratburger … whew, I’m exhausted just listing them – how does he do it? And there’s The World’s Worst Children also released this year. His stellar output is nearly annoying when my son tries to bring all his favourite books into bed with him. The Midnight Gang (perfect for ages 8 to 12) may be his biggest book yet – 416 pages.

Walliams has been compared to the irreverent Roald Dahl, one of his own favourite authors when he was growing up. A new generation of young children (like mine) are now growing up with both authors amongst their favourites. And now that he has a young child of his own, Walliams has branched out into picture books with his third one There’s a snake in my school recently published and reviewed on our site.

According to Walliams, New Zealand is one of the countries with the highest readership of his books. We were lucky to see Walliams when he visited Christchurch in 2015 at a WORD Christchurch event and he spoke to a sold-out audience of 700. There he gave advice on how to write a good story (have a good villain, write what you love…) and talked about the inspiration for some of his characters based on real people, such as Raj his neighbourhood dairy owner and his ramshackle shop. So the burning question is: Is Raj in this new book? Nobody likes a spoiler. All I can say is: Poppadoms anyone?