My colleague Katie and I learnt something new this Adult Learners Week – how to make stuff and 3D print it! We visited the learning centre at Te Hāpua: Halswell Centre. Thanks to excellent training from Danny McNeil, Learning Specialist (and 3D wiz), we went through the whole process of creating an object and printing it. We learned how to design stuff using 123D (software now on library computers) and Inkscape.

Words like extrude and chamfer are now in my vocabulary. I saw how a background in gaming – particularly Minecraft – can help kids (and adults) design. It gets you familiar with working in a three dimensional space –  orbiting, rotating, and viewing objects from all angles can be tricksy and new when you are not used to it.

Danny took us through the process from woah to go – you can watch his how-to videos 3D modelling a step by step guide and have a try. People who’ve done his class have gone on to make all sorts of interesting things – new bits for their tools, flying vehicles, and more.

I highly recommend getting out of your comfort zone and learning something new – this week or any time! 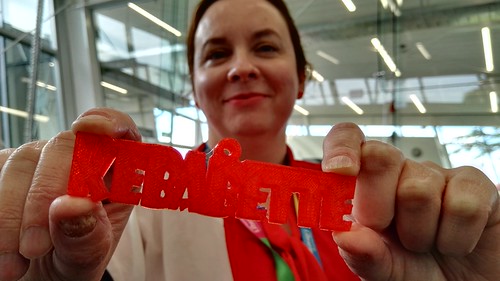 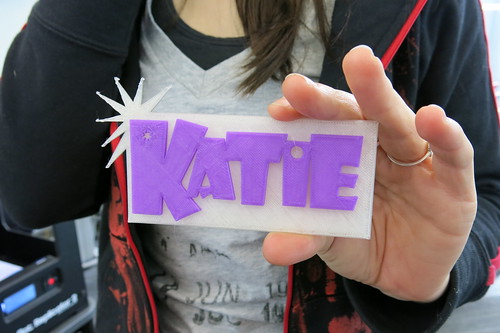 More photos from our training.

Together We Read allows readers across Australia and New Zealand to borrow the eBook Worlds Apart simultaneously for free.

For a two-week period beginning today, you can borrow the eBook Worlds Apart by Ber Carroll. There will be no waiting for this popular modern family story.

Worlds Apart is about two women, cousins and best friends, who are worlds apart and one secret that changes everything. As two women desperately try to find their place in this world in Ireland and Australia, a shocking family secret comes to light, and nothing will ever be the same again. Ber Carroll’s novel is a story about modern-day women, their relationships, family dynamics, conflicts and ambitions.

Canada’s Elizabeth Hay and New Zealand’s Tanya Moir and Emma Neale talked with Morrin Rout about their novels – all of which feature a boy finding his way.

Each author talked about their boy before reading a passage from their novel. Elizabeth Hay introduced Jim, ten years old, and in a car on the way to Lake Ontario, asks of his parents “what’s the worst thing you have ever done?” Jim is a boy out of step with where he is in life, a cross border boy (a Canadian mother and New Yorker father) sorting out who has claims on his love and loyalty.

Tanya Moir introduces us to Winstone Blackhat at age 12, he is living on his own, living rough above the dams in Central Otago, sees himself as an outlaw and is surviving by fishing and stealing food from tourists.

Emma Neale’s Billy is 8 (going on 9) and is a quirky, imaginative child whose vivid imagination becomes a problem to his parents when he believes he is a bird.

Each author read a passage from their novel. There is something magical about authors reading aloud from their own work, the characters come to life as the writer intended and the audience is left wanting to know more.

Morrin asked how did they each decide how to tell the story of their boy? Elizabeth said “His Whole Life” came about from a long drive she was on with her own son and he asked that question “what is the worst thing you have ever done?”. She was unable to answer that question at the time and he was unable to tell her in return his worst thing but the question remained. She wanted to explore that question further so created her fictional characters and set them on a journey to further explore the mother / son bond. The character of George the husband explores the notion of the husband as a fifth wheel.

Tanya said “The Legend of Winstone Blackhat” told Winstone’s story through the mechanism of a Western film inside his imagination. Winstone’s thoughts and feelings are described by a third person character, not by him directly.

Emma “Billy Bird” said she wanted to write a verse novel with three distinct voices, the three voices are those of Billy, his mother and his father. This allowed her not to be limited to the child’s perspective but his voice was playful and madcap and lifted the book when the subject matter deals with tragedy.

Elizabeth’s novel deals with the question “what’s the worst thing you have ever done?” but links in Canadian politics and the question of “will Quebec ever leave Canada?”  Canada and Quebec is described as a bad marriage – where Quebec really needs to leave. Quebec can also be described as an adolescent who will never achieve independence without leaving Canada.

Tanya’s novel is cinematic, she has taken the devices and clichés of cinema and put these back into words. She described writing her novel as imagining it as a movie scene with a camera tracking though the shoot and taking that and turning it into a sentence doing the same tracking with words.

Emma explored the family seeking counselling help to deal with their tragedy. Billy’s bird behaviour is a problem so she looked at what options would a family have to get help? She did this through researching and talking to professionals – but noted that sometimes the writer needs to abandon the research and let the character lead. 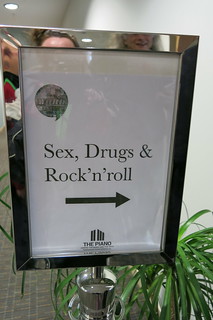 There is nothing like being ushered into a writers festival session with the question”Sex, drugs, and rock n roll?” It feels very non-cardigany!

The readings were fabulously varied in their saucy flavours. After an intro by Aotearotica editor Laura Borrowdale, Melanie read a sexy jewel from Anaïs Nin, Isabelle shared her honest raw love tales, and Jodi Sh. Doff told a story about a verrrry seductive subway ride.

By the way, if you can write or draw, Aotearotica is looking for submissions for Volume Two.

After the sex, the Sex, Drugs & Rock n Roll. This session featured more of the middle vice. Bianca Zander, Jodi Wright, and Kate Holden with Charlotte Graham (who was a very clued up chair). Charlotte wondered why sex, drugs and rock n roll books have such appeal? Taboo and rite of passage were two suggestions.

Kate read stories about drugs before she became an addict – but while she was using, she read fantasy books. As heroin took hold in Australian in the 1990s, it appealed to soft, dreamy types because when the world is a bit abrasive “opiates are a great softener of that feeling”. She also explained how “anthropologically fascinating” brothels are – incredibly moving, compulsively interesting.

Kate’s memoir In my skin shows how important her family is, and she made a good point:

Family doesn’t get written about much in junkie memoirs.

Now that her memoir’s film rights have sold, everyone is re-reading and they are impressed all over again.

Jodi couldn’t remember enough to write a memoir, so used her experience as the basis of a novel. She tried to find out what caused her addiction, going to psychiatrists to find the inciting incident: “What I needed to do was get unstuck”:

The story is what I have.

Bianca “always wanted to write a great rock n roll novel … I don’t think this is it”. It’s elusive trying to capture the spirit of rock n roll in words. Her book The Predictions was inspired by a story about an ashram kid, parented by the whole group, who went looking for his mum in a crowd. She thought about those kids without a solid foundation, unmoored out there in the world.

Two  points I took away from this session:

And finally the rock n roll. I went to the Flying Nun In love with these times session at Blue Smoke. It was a joy. Russell Brown was our MC and on stage were Roger Shepherd, Graeme Downes, Jay Clarkson, Bruce Russell, and Hollie Fullbrook (Tiny Ruins). There were plenty of Flying Nun alumni in the audience which definitely added to the flavour. Roger Shepherd’s book is not just a great tale about a music scene, it’s a pretty powerful look into Christchurch’s history too.

Highlights? Jay Clarkson playing Spooky, and her perspectives on being a young mum and muso. Graeme Downes’ new song Dunedin Spleen (and his general loucheness and academic nous). Russell Brown’s super knowledgeable MCing and questions. The lugubrious Bruce Russell. This was something special.

Black and Blue Storytelling at 27 steps brought me right out of my comfort zone. To be heading into Christchurch whilst stone cold sober and on my own on a Friday night after 10pm was a big thing for me – but there aren’t that many opportunities to hear adult storytelling. In my excitement I hadn’t really reflected on the name – black and blue storytelling in that some of the stories might be a bit risqué.

According to the host, Derek Flores aka ‘The Unicorn’, the aim of the evening was to conduct a social experiment to find “an inconvenient space and cram as many people as possible inside”. It was hot, or as the Unicorn described it “toasty” and the vibe was becoming a lot more like hot yoga – we were achieving weightloss through storytelling – yay!

To add to the surreal vibe, Mitchell the bar tender circulated bills to the people seated and unable to get to the bar. It is virtually a story in itself that, at the moment of Ivan E. Coyote’s introduction, Mitchell was trying to rest payment from them for Ivan’s bourbon.

Ivan had a simple message for the crowd in “A Cautionary Tale”. A tale involving a retro, blue polyester tuxedo, beer, ecstasy, air travel and inappropriate packing told with humour and panache. Don’t drink beer. We laughed, empathised and cringed together.

This tale features in the book “Gender Failure” written with Rae Spoon, exploring their failure to fit into a gender binary world.

The Unicorn and Alice Canton wove an improvised tale that spun, as improvisation can into a surreal meander where the thread was almost lost until the Unicorn brought it all back together to a conclusion. The contrast between the crafted story and improvisation offered two very different oral narratives – a rare and welcome alternative offering in a literature festival programme.