WORD Christchurch Writers and Readers Festival has a strong programme of poetry including the following sessions on Poetry Day itself: 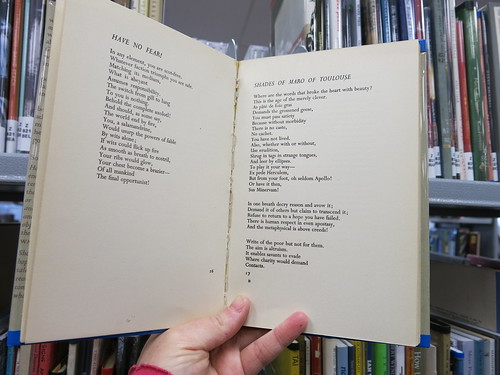 Speaking proud Thursday 25 August 6pm. Event to raise funds to continue the work of Q-topia, an organisation that supports LGBTQIA+ Youth in Canterbury.

Poetry at Parklands – the Poet within
2pm. Parklands Library draws on “the poet within”, within the Christchurch City Libraries that is. That’s right, many of our librarians are writers too. Instead of dispensing poetry books on the day after National Poetry Day, four of our librarian-poets will be reading their own work. The poets are Damien Taylor, Rob Lees, Dylan Kemp and Andrew Bell.

Go down to The Terraces and see the poetry on the banks by Apirana Taylor. Wander further afield and see Ōtākaro to Victoria nā Hinemoana Baker at a mini-park at 108 Victoria Street. There are also poems on power poles on Victoria Street: Whakapapa by Ariana Tikao, and Victoria Street by Ben Brown. There are always fab poems about the town thanks to Phantom Poetry posters as provided by Phantom Billstickers.

Poems in your pocket

Why not put some poetry in your pocket? Download this year’s poems from the National Poetry Day website including one by WORD Christchurch guest Tusiata Avia.

It’s hard to believe but C1 Espresso first opened 20 years ago. In that time they’ve treated patrons to more than just coffee and fancy teas – C1 is known as the kind of place where unexpected things happen. An old sewing machine dispenses drinking water, a sliding bookcase acts as an automatic door, curly-fries are delivered by pneumatic tube and so on, and so on.

I spoke to C1’s Sam Crofskey about Let’s take a walk, in part to try and understand why a café would put together a kids’ pop-up book about the Christchurch earthquakes. It’s an unusual fit.

The motivation comes from a very real place, one that a lot of Christchurch people can relate to, of wanting to move on. And like a lot of things in the genre of earthquake recovery, it didn’t happen overnight.

“We’ve taken four years to do this from a desire to get it right – partly because we’re putting our names to it, partly because of the subject matter,” says Crofskey.

Crofskey and C1 were early returners to the Central City, post-quake. They reopened in 2012 and have been much praised as “heroes of the rebuild” but Crofskey admits that this hasn’t always sit comfortably with him as it seemed to imply that everything was okay with them, as he explains, “our home was in the central city – we couldn’t move on”.

An idea was, if you’ll forgive the coffee-related pun, percolating.

Initially Crofskey enlisted artist friend Hannah Beehre to update the C1 menus with artwork of earthquake damaged city buildings. What she made, drawings of before and after, hacked up and rearranged as collage, were great but there was a problem.

“They were too sad and full-on to have them in the café”, says Crofskey.

So Beehre “softened” the images with the addition of brightly coloured diggers and other demolition vehicles. They added words too. A story grew of “someone who is just trying to explain it (the earthquake) to their kids”.

Crofskey has a young family himself and he even refers to the book as “… an ode to my long-suffering wife and two children”.

Getting the tone of the book right was, he admits, a challenge but he’s happy that “it’s fundamentally a kids’ book”, but one that has things to say that only the adults reading will understand. Poignancy. Loss. Cynicism.

For example, the ending is upbeat, looking towards a shining future… but grown-ups may read it in a different, more cynical way.

“The view of the future is really great – it’s the only picture that’s in full colour – a kind of Wizard of Oz sort of thing. But that’s kind of me taking the piss out of the blue-print and stuff like that.”

Even the choices of which buildings to include in the book aren’t without subtext.

“The Cathedral’s not in it – that’s not a mistake”, says Crofskey making reference to the broken ChristChurch Cathedral as a symbol of a lack of earthquake recovery – an inappropriate choice for a book in which the overriding message is one of moving on and looking forward to the future.

“But kids don’t pick up on that stuff,” says Crofskey drawing parallels with family-friendly films, “it’s like a Pixar movie, is what it is”.

And get ready to feel things when you open Let’s take a walk, as Crofskey claims “we haven’t had an adult who hasn’t been really upset by it”.

Curious to know more? The Let’s take a walk book launch is on tomorrow, Wednesday, 24 August 6pm and is a free WORD Christchurch event. All welcome.

Sam Crofskey will also be appearing in How Are We Doing, Christchurch?, Fri 26 Aug, 11.15am

Kia ora, welcome to Ōtautahi if you are in town for the WORD Christchurch Writers and Readers Festival. Here’s some things to check out while you are here – with a focus on the central city, where this year’s WORD takes place.

Go down to The Terraces  and see the poetry on the banks by Apirana Taylor. Wander further afield and see Ōtākaro to Victoria nā Hinemoana Baker at a mini-park at 108 Victoria Street. There are also poems on power poles on Victoria Street: Whakapapa by Ariana Tikao, and Victoria Street by Ben Brown.

The splendid University Bookshop UBS will be on site at festival venues.

Scorpio Books is in the new BNZ complex at 120 Hereford Street if you want to wander to a bookshop in town and browse. They will be hosting National Poetry Day readings on Friday 26 August.

(If you want to browse old books as well as new, try Smiths Bookshop at the Tannery).

Carpe Librum: Seize the book is on show at the Artbox by the Ara Institute in Madras Street. We’ve taken some photos – it is stunning.

Christchurch people are very proud of our Christchurch Art Gallery – the people as well as the building and exhibitions. Some WORD events take place here. Take the opportunity to check out the exhibition Bloomsbury South: The Arts in Christchurch 1933 – 1953 that ties in with Peter Simpson’s new book – he’ll be presenting a session as well as the book launch. (Book your tickets for Bloomsbury South, Sat 27 Aug, 4pm). Other shows are well worth a look including Doris Lusk and Fiona Pardington.

As a librarian, it behoves me to plug our temporary central libraries. Central Library Manchester (not open on Sunday) – 1.2 km from The Piano – and Central Library Peterborough – a mere 550 metres or 7 minutes walk. There is free wifi, and computers to use as well as books, mags, etc.

If you want to find out more about Christchurch, our website has a motherlode of local history information.

Not just for kids. I am having visions of writers and festivalgoers shooting down the flying fox of an evening. Make it so.

Plus the place is a tribute to our great writers – word witch Margaret Mahy and peace activist heroine Elsie Locke. The wonderful David Levithan will be delivering the Margaret Mahy Lecture on Saturday morning (27 August).

Botanic Gardens and the Museum

A favourite local outing is a visit to the Canterbury Museum and the Christchurch Botanic Gardens. Highlights are the daffodils, the new Visitor Centre at the Botanic Gardens, gaudy, gorgeous Peacock fountain,  conservatories, and the interesting Christchurch Antarctic collection at the Museum.

The Quake City exhibition is on display at 99 Cashel Street, near the ReStart container mall and gives a good insight into what Christchurch people have been through.

A photo op for you book-loving types, near the site of our new Central Library.

The oversized astro turf lounge suite has moved from Gloucester St. Now on the north east side of Cathedral Square! pic.twitter.com/APnlgjZ8M1

Here are plenty of great hospo venues in close proximity to the Festival including:

C1 Espresso  – there are some exciting WORD collaborations going on this place. The book launch for Let’s take a walk is here tomorrow (Wednesday) at 6pm. It’s a pretty damn cool spot in general – curly fries and pneumatic tube food are a Christchurch must. The Spinoff after dark will be on here on Saturday night.

New Regent Street is full of foody spots including:

There’s some new takeaway spots at the new BNZ Centre in 120 Hereford Street – including Burger Fuel, Hachi hachi, and Mumbiwala.

If you want to explore more things to do in Christchurch, try:

Any other tips for places to see? Share them here!