If you are travelling down the northern motorway into Christchurch in the mornings and spot a person in the car parallel to yours chuckling uncontrollably, you might be looking at a librarian who is listening to an audiobook. Similar unexpected outbursts of laughter can happen at some other times, during lunch breaks in the staff dining room or while strolling along one of the streets in the CBD in bare daylight to name just a few.

It’s Tom Gates books that make me unashamedly snort with laughter in front of people. Sometimes I wish someone would ask me what I am laughing at, just to give me an excuse to share with them the delightfully witty escapades of Tom Gates. Tom is a cheerful, excited, good-hearted boy, who loves doodling, eating caramel wafers and pulling pranks on his sister Delia. Most of the days he is late for school, daydreams through school classes and has his very own band called Dogzombies (because he likes dogs and zombies). There is so much in Tom’s everyday life that I can relate to.

But no one can tell a story better than its author, which in this case is Liz Pichon. Liz is equally artful with words as she is with pencils. She illustrates and writes every single page of Tom Gates books by hand! Her doodles are thoughtfully interwoven with texts and create a joyful reading experience. Last week she published Super good skills (almost), the 10th in a series of books about Tom Gates. Many of them are prizewinners and have been translated into 36 different languages.

Liz is coming to Auckland Writers festival this week. Even though she is very busy, she took some time to answer a few questions exclusively for her fans in Christchurch:

I asked Liz how her working day looks like and if she has a special space where she works. What is it like?

When I am writing at home, if the weather’s NOT too grim, I’ll go to the seafront with my husband, have a run (if I am honest it’s more of a PLOD) followed by a coffee. Which I am sure isn’t part of any fitness manual – but it sort of works for me. Once I’m at my desk I often work quite late, so it’s nice getting out in the morning.
I have a shed in the garden, which is on its last legs now. It used to be my husbands recording studio so it’s nice and warm but I’ve run out of storage space and I’m starting to feel like a hoarder who’s surrounded by all her STUFF. When I start a new book I have lots of notes for ideas that I look back on. Then I draw a kind of story map – like an illustrated flow chart. I put down lots of random ideas, then weave them into some kind of order and that’s what I show my editor. I don’t always stick to it exactly but it’s good to have something to refer to. I draw and write at the same time – then transfer the text to a word document. If I do too much writing on the computer I have to edit like crazy when it comes to drawing the pages up later. 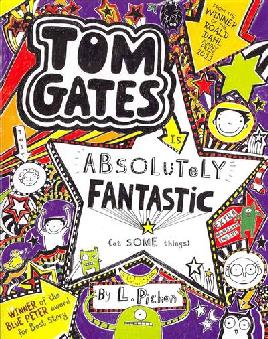 So your books are entirely made by you – you do triple the work: illustrations, text and overall design?

I LOVE being able to draw and design all the pages, it’s all part of telling the story. Once I have written the story, I draw every page by hand and scan them into the computer where I work on them a bit more. Then I send the pages to the designer who puts in the text and uses my roughs to add the drawings. Making these books is a team effort, there are so many little details that need checking and you only get to see the flow of the story when all the pages are laid out. Scholastic (publisher) have been fantastic to work with. I go into their office to work on the final bits and pieces before it goes to print, which is like having a real job.

Delia likes to PAINT. So I would imagine her doodles would look like a Jackson Pollock picture.

Tom’s daily battle is how to fit as much doodling as possible into every class at school. What is your advice to children, who are struggling to juggle between school obligations and passions or hobbies which they love and are good at? Do you have any advice for their parents and teachers?

When I was at school I always got the feeling that drawing and art was never as important as ‘real’ work. It was a ‘fluffy’ subject and not something to be taken that seriously. I loved writing stories as well, but being dyslexic my spelling was shocking (and maths too) so it never crossed my mind that it was something I might be able to do for a living. Caitlin Moran (who’s a writer and journalist in the UK) said you should try and work out what you LOVE doing, then find a way to make a living from it. It took me a while, but that’s what I am doing now. Drawing, writing, painting, meeting kids, doing the events. I have the best job in the WORLD and although I work harder now than I have ever done, I enjoy every moment. I know how lucky I am.

It drives me crazy that creative subjects are being shoved to the sidelines. I heard a talk by Dav Pilkey (Captain Underpants) last year and he had a rotten time in school being told all his comic drawings were a waste of time and he’d never amount to much. Well – seventy million book sales world wide later – I think he’s doing okay!

There are plenty of videos on the web with Liz Pichon explaining how to draw.

Is there an author or illustrator that might have been influential (either in your youth or later on) for you? If you could invite her/him to the concert, which concert would you take them to?

Quentin Blake gave a talk at my art college, he was so funny and his drawings are consistently brilliant. He’s quiet elderly now so nothing too LOUD, besides I’d want to be able to chat to him. So maybe one of those concerts where you bring your own picnic. I used to live near Hampstead Heath and there’s a place called Kenwood House that has lots of summer concerts. I think he might enjoy that.

Libraries unfortunately don’t sell caramel wafers, but we do offer books to read for free. Do you have your favourite library?

The original building is closed now, but Willesden Library in North London was a LIFESAVER when my son Zak was little. It was really close by and I used to take Zak there all the time. People forget how important libraries are for meeting other kids and parents and having somewhere to go that’s free too.

If you could choose one talent you would want to be born with (besides the ones you already have) which one would it be?

I’d love to be able to SING really well. I’d be able to sing all the time and drive my family even MORE crazy than I do now.

Is there a skill you always wanted to gain, but never had a chance yet?

I had a go at throwing a POT last year and it was a lot harder than it looks! I’d love to make a few more and learn to use the wheel properly.

If you could travel back in time, which era of the history would you go to and why?

Just occasionally I look at pictures of my kids when they were little and think it would be nice to go back in time and cuddle them at that age again. They’re 25, 21 and 17 now. But other than that I prefer to look forwards not backwards.

Book – but you can have both.

Cats for independence. Dogs for fun. (I don’t have either!)

I can’t wait to see Liz live – maybe she will share a few more tips on how to live of what you love doing. Or more importantly, how to annoy older siblings, draw funny doodles and incorporate coffee and wafers into your fitness regime.