A few wee things to celebrate at South Learning Centre. 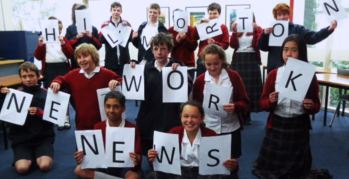 HNN (Hillmorton Network News) finished off their year in style. I am so proud of their film and media progress, learning and confidence. The students presented to their Year 7/8 peer group. This was very nerve wracking for them with over 100 pairs of eyes scrutinizing them. This was followed by them presenting to school staff – who fired many questions at them ranging from their cross-over learning into other areas, what new skills they learned, and where could their skills take them?

The second celebration is for Beckenham Centennial Film School. This was a hugely successful experience working alongside Beckenham School learning all about their 100 year history. We discovered some great stories of the past, devastating details of the fire and some exciting plans for the future of Beckenham.

In our Learning Centre, students experience eLearning programmes aligned with the New Zealand Curriculum document. These programmes provide learning in a technology-rich environment and the teaching within these programmes keep abreast with the latest teaching philosophies and strategies.

If you are interested in working with us to tailor an existing programme or work alongside us  please contact us Tel: 941 5140 or  Learningcentre@ccc.govt.nz

23 November 1988
Human remains dating back to pre-European Māori settlement found while excavating for YMCA building on the corner of Hereford Street and Rolleston Avenue. Area declared tapu for 24 hours until remains removed.

25 November 1940
“Holmwood”, en route from the Chathams to Lyttelton, sunk by German raiders. Passengers and crew were taken aboard the German ships, and eventually made their way home 2 months later.

26 November 1857
Opening of the first building (long since demolished) on the present Christ’s College site. The school’s original planned site was in Cathedral Square, but the land had been exchanged for the present Hagley Park site to allow room for expansion.

28 November 1893
Women vote for the first time in parliamentary elections.

28 November 1964
Opening of Cashin Quay, Lyttelton Harbour. The engineering techniques used in reclaiming this area were unique in the world.